One of them is, of course, as in that old anecdote about Chief The Sharp Eye who after a month of imprisonment noticed that the prison had only three walls, with the fourth one gone and leading to freedom, Washington Post now "noticed":

Increasingly, Ukrainians are confronting an uncomfortable truth: The military’s understandable impulse to defend against Russian attacks could be putting civilians in the crosshairs. Virtually every neighborhood in most cities has become militarized, some more than others, making them potential targets for Russian forces trying to take out Ukrainian defenses.

No, moron, what's your name, Sudarsan Raghavan, it is not "virtually every neighborhood... has been militarized", it is called using civilians and civilian infrastructure as a human shield, because people are not allowed to leave. A classic newspeak and double-meaning from a CIA-controlled rug, which also has issues with "noticing" the fact of Ukies shelling incessantly civilian neighborhoods all over Ukraine and Donbass and then, of course, blaming it on Russians.

But behind this sudden discovery by lowlifes from WaPo hides another important purely military truth admitting which by the pool of all kinds of former Top Brass spewing BS in main stream media on Ukraine is akin to committing a seppuku, and those perfumed princesses don't like pain. Obviously, nobody does, but when truth causes pain, then it tells you something about the character of people. And here it is, from Saker's blog:

It is now clear that the Pentagon leadership has seen the utterly dismal performance of the Javelin and now wants to phase it out from U.S. forces. Remember, out of thousands of Javelins supplied, thousands of videos published by Ukraine, not a single successful usage of the system has ever been recorded. In fact the vast majority of successful Ukrainian defeats of Russian armor happens at the ends of legacy Soviet/Russian systems and mostly artillery. Russian forces continue to find Javelin units completely unused because Ukr troops have found them to be unwieldy and impractical in combat – too long to set up and use, too heavy to carry around, and not effective even when used.

Color me surprised, NOT. Didn't I warn about all those wunderwaffe supplied to 404 by the US and NATO? Those are primarily for sale, not for fighting a REAL war. Emphasis on "real". The author of the piece (Nightvision) continues:

In another sudden and unexpected report, the Pentagon now wants to scrap DOZENS of F-22’s. They have suddenly decided they want to ‘divert funding’ to the next generation platform. There is clearly connection here to something the Pentagon has witnessed in Ukraine that has left it scrambling to rethink its approach to modern warfare. You see all proxy wars are laboratories for Great Powers to test and assess their equipment. The F-22 was the flagship of the U.S. airforce, the ONLY plane forbidden by Congress to sell to any ally even in ‘export version’.

I find nothing unexpected in that cancellation. Many people have to put together these two events: December 2005, the official acceptance of F-22 into service and this date--April 2007, combat deployment of S-400 air defense system. For those who have a short memory I will remind you that throughout 2000-s Russians maintained that F-22 was already obsolete by the time it was rolling off the manufacturing floors of Lockheed and that the whole "Stealth" concept as envisioned in the US was a grossly oversold marketing gimmick. Since then S-400 not only spread around but deserved the reputation of the best AD defense system in the world and when air war is considered within the framework of Russia's, not Iraq's or Afghanistan's, air defense capabilities which are redundantly networked, are supported by both Early Warning, EW  and satellite capability, and are very deeply integrated top-bottom, suddenly this whole concept of the US air war and of F-22 begins to lose its glamour and hi-tech feel.

In other words, Russian AD, as I am on record non-stop, not only sees any "stealth" target, but tracks it and develops and, if necessary, distributes targeting. This is a completely different environment and as events of the last moth in 404 have shown--relatively modern and numerous Air Force, such as this of 404, ceases to exist as a force very fast and is reduced, both by strikes at the air fields and through anti-air operations, to a collection of random "survivors" whose sortie rate goes down precipitously and their chances of accomplishing anything and return to the base are approaching zero. And all this, against the background of what I describe for years as the best Troop (Voyskovaya) Air Defense  in the world.

Some "average" Russian motor-rifle brigade, let alone division boasts organic air defense capability which is simply unmatched by anything in the West, not to mention, of course, separate Troop Air Defense formations which already today are capable of some serious anti-ballistic and hyper-sonic "heavy-lifting" and this was fully demonstrated in Ukraine, if anyone had any doubts about some deliberately limited capability demonstrated in Syria. The capabilities of something like S-300V4 are mouth-watering, and those are not marketing gimmick or sales pitch. So, generally speaking, the problem for NATO (and the US, of course) is that its foundational principle of "high success rate--low losses" turns itself upside down and becomes "high losses--low success rate". This is not the paradigm NATO is capable of handling and it blows out of the water the whole concept of the US SEAD operations, because it breaks down completely.

Good ol' ideas of throwing hundreds of TLAMs of mid to late 2000s production run against air defenses of the 1960s and then "polishing" what's left with HARM's and laser guided munitions are long gone. For starters, any salvo will be met with much more devastating response. And if theoretically E-3 Sentry (those which will be allowed to fly) can detect track and develop the "vector" against slow 3M14 and X-101, against Iskander, P-800 Onyx let alone Kinzhal it wouldn't matter. I omit here 3M22 Zircon, which is a whole other story altogether. What good is Early Warning when you do not have a counter. Suddenly it works only for one single maneuver--running for one's life. So, the problem for NATO is fully vertical, it is tactical, it is operational, it is strategic and it is technological. You cannot fight with F-22 against modern (well, let's say it--cutting edge) air defense of such a "peer" as Russia. It is difficult to fight 21st century technology and battle-space management concept by such relics of the Cold War of 1980s as F-22 or, for that matter, with a dubious and equally expensive weapon system such as F-35.

That is what Russians were saying for almost two decades but it was dismissed in the US as Russian rah-rah and sour grapes. And that brings us to the most important point: Russians, wrongly, until very recently--5 years give and take--thought that opponent with rational thinking and good awareness would understand what is being said to it and what is being shown. A lot of it was based on the assumption (wrong) that the US understands military implications and ramifications of what I called Real Revolution in Military Affair. No, not "revolution" which was being prematurely announced in the wake of an easy and one-sided beating of utterly incompetent, outgunned and outmaneuvered Saddam's army in 1991, but revolution which provides a radical departure from older concepts of the modern war and manifests itself not in some nauseating self-praise of a 20-year bully who just beat a 5-year old in the sand box into bloody pulp, but by tracking force correlation against equal, let alone better, opponent.

So, here we are--already in the fifth week of Russian operation in Ukraine we can see shapes of the warfare to come in terms of technological edge and that is why combat use of Kinzhal created real shock and awe in NATO, not to mention the fact that we are yet to see full data on Russia's AD operations in 404 and that, believe me, will be a wowser. In related and welcoming news, Vladimir Putin signed yesterday an extremely important document: 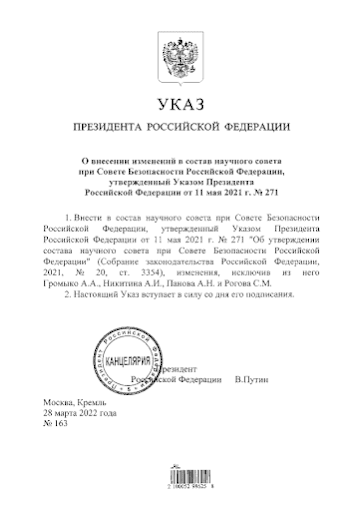 The order removes from the Scientific Council of Russia's Security Council some really uber-Atlanticists such as Sergei Rogov, Alexander Panov, the grandson of Andrei Gromyko and other peacenik who didn't like that Russia decided to finish off 404 and wrote a letter for peaceful resolution. Well, one of those signatories is Mr. Kortunov who is a darling of RT. The common thread here is that these people are all directly connected to MGIMO and despite their impressive humanities credentials are utterly ignorant on military-political realities of the moment and, as is true for majority of the political "scientists", cannot wrap their brains around military dimension of what they love to talk about--national security. Here is the "letter" I mentioned above (ha, site of Yabloko--surprise, surprise). As is expected, it is for everything good, against everything bad.

You can use Google translate to read this hollow BS, it is the list of signatories which is very remarkable. I had a blast reading it, it also explains the scale of "purges" (nothing in common with Stalin ones) of all kinds of discredited talking heads most of who I wouldn't allow to mow my lawn due to their incompetence, but then again, most of these "experts" were in the process of being removed from real levers of power for some time now, it is good that now they and their "expertise" is removed from the intellectual environment around Russia's decision making centers. This is as huge of a news, as is the performance of Russian weapons and lack thereof of the American ones.