Here Is My Talking Head.

In lower resolution--I am not Alain Delon in his prime, so there is nothing to look at and you can tolerate my lower resolution but it increases the speed of upload to YouTube.

Immediately after this video a number of people started to ask questions and I guess I will try to answer some of those. Larch, I will address the issue of netcentricity separately, albeit this topic got some treatment in my second book. But I know, even basic intro requires dealing with some numbers and theory of graphs, so I do plan to address it separately. For those who want to warm-up themselves on this issue--here is intro into Metcalf's Law.  Suffice it to say that for military applications it is all about situational and tactical awareness and very effective targeting. Here is a famous work by Alberts, Garstka and Stein on the matter:

So, have fun and if you have questions--ask. I will try to answer them to the best of my ability.

If at some point on your blog or here you could address the issue of the logistical/physical realities (or lack thereof) of current foreign arms promises/shipments I and I would guess many others would be indebted. I understand on a basic level the challenges if not impossibility of distributing these promised weapons and systems any further than Western Ukraine (if even that far east) to what would be unorganized fighters and mercenaries, but it would be great if you could weigh in on the issue, if even generally, and/or point to a solid analysis addressing this issue. Many thanks again!

Here is the answer. Yes, the West is pumping weapons into 404, but it has to be understood that majority of this weaponry is of anti-tank and manpad variety. While manpads could be a danger to low flying aircraft, especially helicopters, they are primarily a danger AFTER the war around airports with commercial aviation. 404 has (and took delivery of) thousands of manpads but they were marginally effective shooting down one Su-25, allegedly one Mi-35 and we don't know with what lone Su-34 was shot down. Something tells me that Su-34 case could be that of a remaining ukie Buk-M1 and AD ambush.

Per anti-tank weapons. A vaunted and much talked about Javelin performed abysmally. Two cases of Javelins hitting Russian tanks have been reported by Russian MoD. In both cases tanks continued with the task, one of the crews had minor concussions and continued with the task in their tank and destroyed two ukie tanks. They will be awarded. So, all in all, all those ATMs, manpads and RPGs are primarily weapons for what Washington thinks will be a prolonged guerilla warfare in 404, but why they are delusional about creating a "second Afghanistan" for Russians is a separate topic. As I am on record--Washington yet again fails to understand the nature of the war and how it is prosecuted. They just don't learn. Russia IS NOT going to occupy 404, let alone in parts where steppes and sparse forest-steppes flow into the alpine and foresty landscape of Western Ukraine. Moreover, that will be new, reconstituted, Ukrainian security forces which will be dealing with the issue of a residual nazi infestation.

Washington is so desperate that these types of BS periodically appear as news:

The U.S. remains in discussions with Poland to potentially backfill their fleet of fighter planes if Warsaw decides to transfer its used MiG-29s to Ukraine, four U.S. officials tell POLITICO. The ongoing talks, as President Volodymyr Zelenskyy pleads with Congress for help, underscore the frantic push to find weapons to equip Ukrainian forces as they continue to fight off the massive Russian invasion. As Poland weighed sending its warplanes to Ukraine last week, Warsaw asked the White House if the Biden administration could guarantee it would provide them with U.S.-made fighter jets to fill the gap. The White House said it would look into the matter. The Biden administration didn’t oppose the Polish government giving Kyiv the MiGs, which could potentially escalate tensions between NATO and Moscow. Poland, for now, has held on to its fighter jets. Discussions between Warsaw and Washington are still underway, though authorization for new, replacement fighter jets to Poland could take a long time.

People who continue to write this BS, obviously, have zero grasp of both judicial issues and even more so of the air-dominance and air-defense issue. NO amount of old MiGs will make any difference militarily nor will any NATO fighters--all of them will be detected, tracked and shot down in Ukrainian air space. All this BS is what we call a damage control, because the US, facing the final obliteration of its proxy force, ranging from VSU to beloved in Washington Nazis, is desperate not to repeat a debacle of Afghanistan, but this is exactly what it is especially since Russian Armed Forces already wiped out most of the VSU whose combat potential was order of magnitude larger than that of the Taliban. So, the new, much larger Afghanistan 2.0 is looming for Biden Admin and Washington's "strategists" and that explains absolute hysteria across the board in media and political establishment. Douglas Macgregor is spot on: Russia in Ukraine is not to gain territory, she is there to wipe out Kiev regime military and Nazi-driven security machine and is accomplishing her task really well.

They are also hysterical because they know that:

a) Their utter incompetence is being exposed;

b) Their lies and disinformation is breaking down;

c) The long to mid-term comparison of the US military debacles in Iraq, Syria and Afghanistan with Russia's non-stop triumphs from 080808 to Crimea, to Syria to destruction of the West-sponsored thugs with weapons is not only warranted, but inevitable;

d) By default it weakens even more the founding myth of the American military power which is the main pillar on which the US Dollar's status as the reserve currency rests.

Tom Weiss made a comment responding to some, most likely, svidomy or genuine US "exceptionalist" who now comments on most my videos in a typical BS manner (trying to hide own butt-hurt), while answering to stupid smart-ass post, Tom wrote:

Time will tell. If he's wrong, we'll all know in a week or so. Then his whole career is on the line. If he's right, though, then 90% of Western media should quit and learn to grow potatoes or something.

People do not understand that my career is not on the line, since it passed this test namely at this blog starting from 2014. My three books (the fourth is in works) also give a good hint at what I do. To illustrate this, here is what a respectable French military publication Revu Defense Nationale writes about my second book, which is on warfare:

Translation: A stimulating essay, like the previous one by the same author, even if some developments are sometimes a bit off-the-cuff. Andrei Martyanov has the merit of forcing us out of our intellectual space of comfort and leading us to think about modern warfare through the possible emergence of new paradigms. 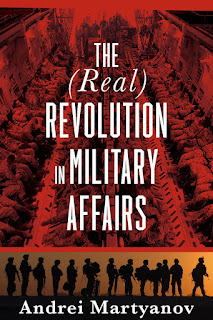 We can see now how the framework described in it gives a good tool set for many to arrive to correct conclusions without my interference. This little blog of mine yesterday crossed the threshold of 10 million views, and this February (28 days, no less) I hit almost a million views and March promises to beat that by a very wide margin. Evidently people find some value in what I do. I couldn't have asked for more. And, yes, please support me on Patreon. I really need this million dollar Ferrari. Nah, I am screwing with you, there are no million dollars Ferraris;))) I do need, however, to do some dental work and all your support helps.
Posted by smoothiex12 at 10:10 PM

Email ThisBlogThis!Share to TwitterShare to FacebookShare to Pinterest
Labels: forecasting., My latest video, netcentric warfare., some Q&A, some strategic issues