Or decommunization of 404 about which Vladimir Putin spoke on February 24. The aerospace community is in tears (not entirely fake) about the fate of the massive AN-225 Mria, the largest cargo plane in history, which was destroyed during the battle for Gostomel airfield, which also happened to be the Antonov Design Bureau's airfield. Here is one of the pilots of Antonov blames the management of the "company" for the demise of a giant.

Well, it is all fine and dandy but the whole thing should be looked at in precisely the framework of decommunization of Ukraine, to which the whole Novosibirsk based Antonov Design Bureau was, same as Crimea in 1954, simply given by powers that be, to then Soviet Republic of Ukraine, and design bureau has been transferred to Kiev in 1952.

It is worth mentioning that 404 has zero relation both to Antonov corporation which for all intents and purposes was dead for a number of years and before 2014 was kept afloat only by Russia's contracts (since 2014 Antonov produced a whopping... 2 (two) aircraft). So, aerospace industry which Ukraine inherited from the USSR in 1991 was successfully killed. So was AN-225 which was a product of a massive Soviet aerospace cooperation and the giant has been produced to primarily carry Soviet shuttle Buran on its back. 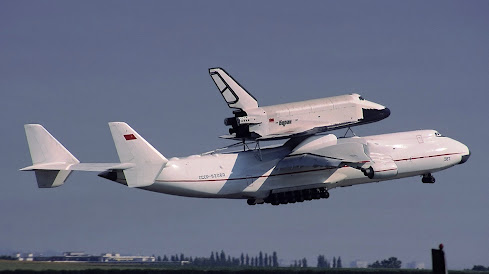 Obviously, 404 couldn't have possibly recreate anything like this, let alone design something similar, not to mention more advanced. The result is symbolic:

And it fits perfectly with the fate of modern Ukrainian statehood whose whole idea is based on one single metaphysical pillar: Ukraine is not Russia. And Russians, overwhelming majority of them, agree. The moment Ukraine was removed from the economic organism of itself dying Soviet Union she placed herself firmly on the path to agrarian future and third worlddom. Simple as that. In this respect, the fate of AN-225 was both expected and inevitable, because the aircraft manufactured in 1985 was not only obsolete but maintaining its aging, 37 year old, air frame has become an ordeal, especially in a country which itself became economically unsustainable even in basic fields, forget advanced aerospace industry. The 404's aerospace was fully decommunized, finally.

Yes, the efforts to preserve this remarkable achievement by the Soviet Union should have been undertaken and AN-225 could have found a place in some aerospace museum, but Kiev would choke from the idea of transferring it to Moscow. Well, now they shed crocodile tears. Hey, the nature came into balance in Ukraine--third world Neo-Nazi satrapies do not have aerospace industries. They simply cannot afford them. There is one bright spot for Russia though in all that: with the events of the last three weeks Russia can immediately start manufacturing (she has ALL competencies and plant) modernized AN-124 Ruslan, held up due to copyright issues, before new huge Ilyushin transport aircraft Slon gets out of R&D phase and onto the assembly lines. As the famous proverb goes: those born to crawl, cannot fly. And this wisdom holds true. They wasted the whole country away, too late to cry for the aircraft, however outstanding Mria (Dream in Ukrainian) was.