I am being hammered by messages from all kinds of armchair strategists who think that they are qualified enough to make conclusions on operation based of such sources as WSJ or CNN.  Here is Larry doing a professional job for them:

Russian military strikes in Western Ukraine during the past week have shocked and alarmed NATO officials. The first blow came on Sunday, March 13 at Yavoriv, Ukraine. Russia hit the base with several missiles, some reportedly hypersonic. Over 200 personnel were killed, which included American and British military and intelligence personnel, and hundreds more wounded. Many suffered catastrophic wounds, such as amputations, and are in hospital. Yet, NATO and the western media have shown little interest in reporting on this disaster. Yavoriv was an important forward base for NATO (see here). Until February (prior to Russia’s invasion of Ukraine), the U.S. 7th Army Training Command was operating from Yavoriv:

The following is from a NATO briefing on the facility.

Read the whole thing at Larrys' blog and pay attention to graphics. As you understand, this is just one of the episodes of a war. The other one is "sudden" (not really) appearance of Russian forces near Krivoy Rog--a precise maneuver which morons from WSJ, following ukie propaganda and "advice" from their "experts", interpreted yesterday as a "victory" by VSU, when in reality it was a classic bypass of already blocked Nikolaev.

Now, for those who still whine about "slow" progress. Here is a demonstration--roughly 12 by 10 miles snippet of the terrain in Donbass: 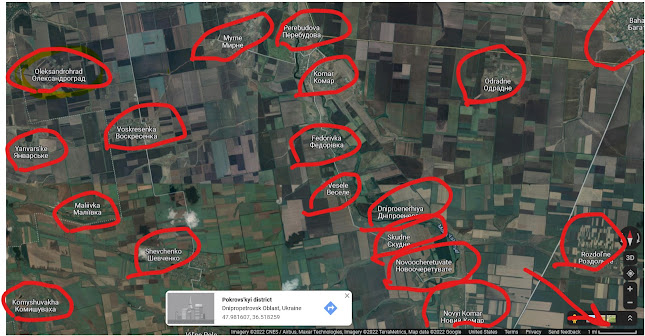 These are just some towns and villages concentrated in this NOT the most densely populated area. Practically ALL of Eastern Ukraine is nothing more than just one huge agglomeration of small to middle size towns and villages forming essentially one huge urban area, much of it reinforced by concrete bunkers and underground lines of communications. 404 spent last 8 years as one LDNR tanker said it yesterday--"pouring it (concrete) in"(c). It takes time to clear all of a very large ukie force entrenched there.

Per Mariupol and elsewhere: Russia gives the remnants of Azov a corridor out of Mariupol which they can enter without arms. This is also the attempt to save remaining around 100,000 civilians, many of who are used as human shield. Azov has been essentially beaten into the ground at the Azov Steel plant and if they disagree, they will be finished off and that will mark the end of Mariupol operation. That also frees a lot of units for operations elsewhere. Now, Zhitomir base for mercenaries and NATO instructors has been hit by stand-off weapons, 100+ are confirmed dead, the number most likely will grow. And, of course, Nazi "battalion Donbass" has been largely wiped out and its remnants together with remnants of 54 OMBR of VSU will be finished off shortly.  This is some sort of a sitrep for today.