... of a complete cretinism of US MSM. Get a load of this.

They invent a "story" of some defiant ukie grunts (long since debunked), and now, by showing some MLRS (Grad most likely) salvo, they claim the sinking of Vasily Bykov patrol ship. By MLRS no less)). "In accordance to reports", without mentioning, of course, that these are not "reports" but propaganda fake by ukies and their masters. Of course, no video or photographic evidence of sinking of Vasily Bykov is provided. Of course, it is not provided.
But this whole BS, together with hundreds of Russia's combat aircraft "destroyed" and thousands upon thousands of Russkies killed on the battlefield,  exists only in the inflamed imagination of the US "journalists", who, apart from being whores (sorry, whores, for comparing you to US propaganda--I know, it is a huge insult to whores) and the brainwashed Western public which is utterly illiterate on such matters as operations of combat fleets and basic targeting. Obviously, the destruction of the moving target (ships do move in the sea and do not really stop during combat) by MLRS in the absence of targeting (most ukie radar, including those along the coast of the Black Sea are gone now) is something out of fantasy or cheap war-gaming on Commodore computer. Obviously for morons from ABC it is unknown that MLRS ukies have are classic "area impact" weapons designed only to work at the spread out ground targets based on accurate targeting.
No doubt, the United States may try to provide targeting to ukies (you see--I am going now into a full blown "what if" BS scenario), but the main issue here is that the Black Sea Fleet currently completely blocked the 404 coast and with it it also brought to bear some damn effective AD ranging from Fort at RKR Moskva to Shtil on pr. 11356 frigates for which slow ballistic MLRS rockets are an easy target and no ship of the Black Sea Fleet operates out of the AD areas of the task group. At this stage one can only do a facepalm and admit that the West cannot even provide a believable BS. Not surprising, once one looks at the "elites" Western "education" provide for this kind of psyops. Recall, I already discussed this issue before. They are simply that incompetent and have no grasp of modern warfare, especially involving issues of C4ISR.
In related news, Mariupol is unblocked and, finally, mass evacuation of civilians started, with mopping up of the center continuing. The war crime by 404 against civilians in Donetsk will not stay unsolved, by now it is known who and how gave an order to use Tochka U against civilians in Donetsk. This is the only type of the warfare combined West is capable of conducting: propaganda BS and killing civilians. I don't know, can anyone explain to this boy what is the real war?

Jake Sullivan, the national security advisor to US President Joe Biden, has warned Russia that NATO would go “full force” if any strike is recorded on NATO territory – intentional or not – after Moscow attacked a Ukrainian military base near the Polish border. In an appearance on CBS’ ‘Face the Nation’ on Sunday, Sullivan was asked by host Margaret Brennan whether the current US policy was “that any strike into Polish territory or airspace, intentional or unintentional” would be considered an attack on NATO. “The president has been clear repeatedly that the United States will work with our allies to defend every inch of NATO territory, and that means every inch,” Sullivan responded, explaining that “if there is a military attack on NATO territory, it would cause the invocation of Article Five, and we would bring the full force of the NATO alliance to bear in responding to it.”

Can somebody also explain to this ignoramus that NATO's "full force" militarily in terms of conventional response is primarily virtual because... well, again, he should have attended a serious military institution to get a real education, not studying the BS of political "science" and "international relations" in Yale and Oxford--stalwarts of the West's production of ignoramuses for top political jobs in Anglo-American world. We can see results of such an "education" all over the place, including "destruction" of Vasily Bykov by ukie MLRS. Do not expect integrity and honor from those people. Same goes for tangible evidence of destruction of the ship. Don't hold your breath--these are Western media, they lie for a living.

This, however, I think is too late for Meta.

Facebook’s parent company Meta has changed its policy guidance on tolerance to hate speech to prohibit “condoning violence” against “Russians in general” and to ban calls for the death of heads of state, Reuters reported on Monday, citing a memo posted on the company’s internal platform. The Sunday post, published by Meta’s global affairs president, Nick Clegg, and seen by Reuters, suggests that Facebook is “narrowing the focus” of its content moderation policy to make it “explicitly clear” that a previous decisions made last week should not be interpreted as “condoning violence against Russians in general.”

Too late, creeps. The policy was already in place and, as with the murder, you cannot roll it back and say that things are cool now. Doesn't work like this. Obviously they should worry.

Russia’s Prosecutor General filed a legal complaint with the nation’s courts demanding all Meta platforms be outlawed and the company itself be designated an extremist organization in Russia over allowing hate speech against the country’s nationals. Facebook was banned in Russia even before these developments over discrimination towards state-owned and state-affiliated Russian media outlets.

It is not surprising that such a company goes homicidal when one considers who, as an example, dominates moderating policies there. 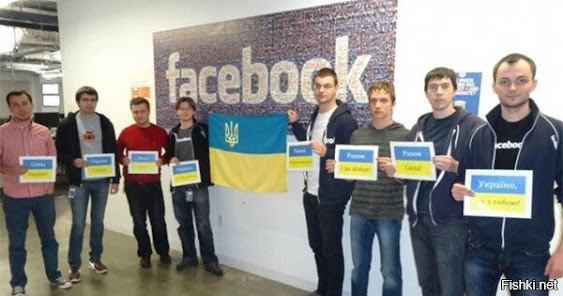 This is 2017. But then again, the US itself failed to notice how its own political discourse was ukrainaized. This is just the start. Here is your Monday primer.
Posted by smoothiex12 at 10:49 AM