Here is the video from War Gonzo on how "brave" Azov is going to fight, while not allowing people to leave their homes and be used as a human shield.

The mop up operation, however, continues in Mariupol and Nazis are being driven closer to the city center and they have no chances because Mariupol is completely blocked by LDNR and Russian forces. This video explains extremely well what Russian forces do and what they have to deal with, and why all those pathetic speculations about "slowing down" are propaganda and sophomoric BS. Everything is being done to minimize civilian losses in a face of terrorist tactics of using innocent civilians.

Moreover, I reiterate, operation develops as planned and reserves haven't been introduced yet and it is done for a reason--numerically smaller Russian and LDNR force already did what is called a strategic reconnaissance in force and in doing so demolished VSU almost entirely. I am on record, and you can and are encouraged to quote me on this--this operation will be studied in military academies around the world for many decades to come. It is something absolutely unique in scale, scope and surgical precision. Here is summary (aggregate) on VSU for March 9. 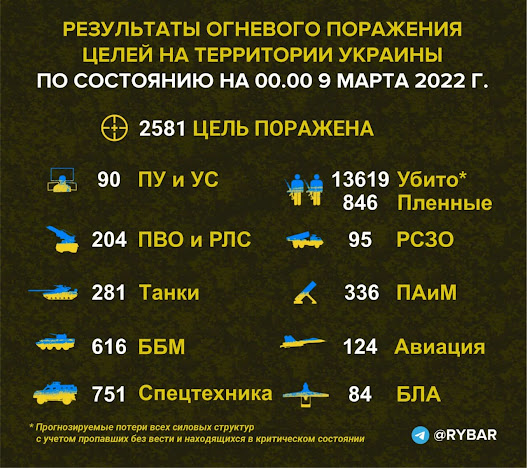 VSU and Nazi units now are nothing more than several cauldrons of isolated formations, which are without centralized control and are being reduced as I type this. Again, reserves haven's been introduced yet. They will be, but that is a separate topic. As will be now increasingly prominent issue of the US biological weapons program in Ukraine. In related news, the project of legislature on nationalization of assets of Western companies leaving Russia due to sanctions was approved by the Judicial Commission of Russian Government for State Duma to turn it into the law (in Russian).

Is the United States ready to sacrifice Eastern Europe? Not out of the realm of possibilities. Poland begins to feel the heat.

“Poland is not a party to this war. We want peace as soon as possible. And NATO is also not a party to this war,” Polish Prime Minister Mateusz Morawiecki told reporters, reiterating his call for the US-led NATO alliance to decide on the potential delivery of Warsaw-owned aircraft to Ukraine. The remarks took place in Vienna, as he was meeting Austrian Chancellor Karl Nehammer on Wednesday. The delivery must be approved by the whole bloc, and Washington in particular, Morawiecki insisted. “Such a serious decision as the handover of planes must be a unanimous and unambiguous decision made by the entire NATO. Today, this decision is in the hands of NATO, in the hands of the Americans,” the PM stated.

As I state non-stop, any "transfer" of combat aircraft to 404 will merely assure those aircraft being destroyed either in the air or on the airfields of the "host" (presumably NATO members) and militarily is absolutely meaningless. This is a primer for Wednesday.