Russian Army took a major city of Kherson (in Russian) and that opens roads towards Nikolaev and Odessa. It also completes a land bridge between Crimea and and operational zone. 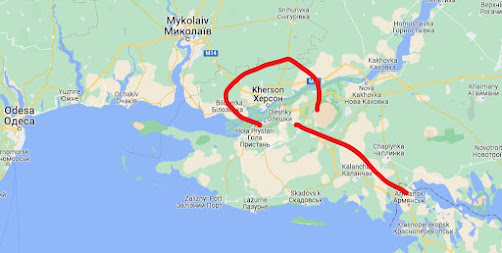 Meanwhile, accountants and stock traders in the US, who pass for economists for some reason,  parade themselves as clowns yet again. Here is a quick demonstration:

More than two decades ago, on August 17, 1998, Russia defaulted on its debt and devalued the ruble, sparking a political crisis that culminated with Vladimir Putin replacing Boris Yeltsin and which also eventually resulted in the spectacular implosion of a then little known hedge fund called Long Term Capital Management (which was staffed to the gills with "brilliant" Nobel prize winners) which after receiving a Fed-led Wall Street bailout, ushered in the era of too big to fail. We bring this up because in just a few hours, Russia will be in another technical default. Amid the flurry of capital controls imposed by Moscow today, the Russian central bank banned coupon payments to foreign owners of ruble bonds known as OFZs in what it said was a temporary step to shore up markets in the wake of international sanctions. What it really is, is a technical default on upcoming interest and maturity payments, with a trigger due as soon as tomorrow.

The first question here is, of course, that all these London-based "analysts" do not understand the difference between default as a failure of payments on financial obligations and the RESPONSE, as a deliberate withholding of payments, for geopolitical reasons. The expropriation of the Western assets in Russia will follow. They just don't get it. Which, BTW, reference to Russia's default of 1998 betrays completely. Russia in 1998 was an economic basket case, Russia of 2022 is economic superpower. As I said, I reiterate, any degree in "economics" from any Western educational institution is degree in nothing and is absolutely worthless, because it provides, at best, some basic accountant courses and courses in demagoguery in financial matters. Those "degrees" provide zero tools for strategic planning because they DO NOT teach how real economy operates. All these courses could be compressed into the 12-16 weeks program with issuing accountant certificate.

Russia MoD released first data on Russia's losses. 498 KIAs, VSU lost 2,800 and I doubt anybody really counts corpses of nazis. This is war, losses are inevitable. Considering, however, a huge scope of operation the losses are light. Yes, I know, somebody loses their sons, fathers, brothers, but that's war, not a computer game. Meanwhile, a sewer such as NYT continues to supply a copious amount of propaganda BS (most of it compiled under supervision of CIA in Poland) and now states this:

WASHINGTON — Plagued by poor morale as well as fuel and food shortages, some Russian troops in Ukraine have surrendered en masse or sabotaged their own vehicles to avoid fighting, a senior Pentagon official said Tuesday.

LOL. Pentagon, of course, is now seriously butt-hurt for a number of reasons, among which Russia exposing US military as a paper-tiger designed to fight third world weaklings is a major one. It is really pathetic, not to mention the fact that all NYT, WaPo and other "senior officials" from anywhere are themselves who invent all kinds of utter BS. Obviously, these cretins do not know that there are NO conscripts in operational zone. But then again, try to explain to Western presstitude with degree in glorified English what real war is and how it is fought, goo luck with that. They will not be able to report on it honestly even if they wanted to, they simply have no grasp of what REAL war is and what goes into it. The West lives in alternative reality and sees its institutions implode as I type it.

This is just the warmup, folks. You ain't seen nothing yet. EU has to prepare itself to what is coming and what is coming, as I and other warned for years, is an utter destruction of European industries. Russia, meanwhile, is happy since her hydrocarbons are eagerly awaited in Asia. Well, what did you expect from Europe which has as its leader a gynecologist and specialist in children's medicine. So, here is a brief sitrep. I will abstain for now from discussing in depth Russia's economy because it is very dynamic and huge nationalization  is in progress. But hey, let's West deal with its own BS, we know the result already. OODA, baby, OODA. Try to explain it to a lawyer in US Congress what it is and how it is done.