Couldn't be more true. The reports of VSU's hardware increasingly being immobile due to lack of fuel are pouring in. So, good ol' truism is truism for a reason. In related news, economics first and yet another truism, while dogs bark, the caravan passes on:

India is stepping closer to setting up an alternative payments system to maintain its trade with Russia, identifying a potential bank, as a top panel examining the issue recommended prioritising edible oil and fertiliser imports as well as payments owed to India, an official aware of the development has said.

Hindustan Times no less. People ask me all the time: what about dedollarization. Here it is in its full blown glory. That is why Jake Sullivan threatens China:

"It is a concern of ours," he continued, "and we have communicated to Beijing that we will not stand by and allow any country to compensate Russia for its losses from the economic sanctions."

And while Western media continue to spread fakes from 404, Jake Sullivan better learn (don't hold your breath) the actual correlation of economic and military potentials between what increasingly forms as isolated and fast declining West, headed by the US, and the rest of the world. And here are some pictures for Western mercenaries (primarily good at shooting defenseless civilians) to consider in terms of what I write for many years. These are from Yavorov Range where CIA and NATO "advisers" were training Neonazi forces and now were drilling combat cohesion for mercenaries' "units". As some of those "soldiers of fortune" admit--180 of them are gone.

As I am on record--it is one thing to shoot civilians, totally another to be under sustained fire impact of high precision stand-off weapons. Here it is. That is how it looks like and that is precisely how the rear of any--even the best NATO force--will look like in case of the war with Russia. I repeat: NATO watches this operation in a complete shock and awe, especially when one considers that VSU, especially its 80,000 grouping in  the East and which was trained and equipped by NATO is fully surrounded and broken apart and is being annihilated as I type this. 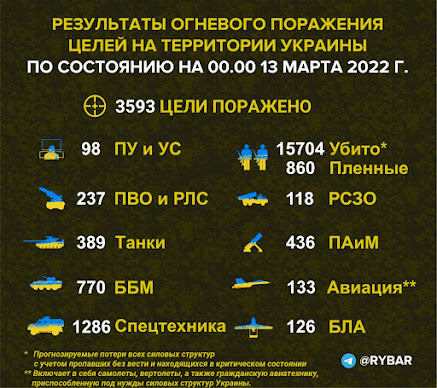 And now, in order for me to stop constantly explaining why all those Colonel Cassads, Yuri Podolyakas, all other "military experts" are BS spreaders, here is (sadly only in Russian) retired Colonel of the General Staff.
It is worth listening, especially in terms of planning.

In conclusion. As yesterday's Military Approved confirmed, 3M22 Zircon is a very low observable system and is not detectable by present detection means, not to speak of West's interception system (air defense) which cannot shoot it down. With the range of 1,500 kilometers and M=9 this version (first) of Zircon is a radical change of paradigm. So, here is you primer for Sunday.

UPDATE: here is one of the Nazis complaining about this whole "situation" with wiping out mercenaries at Yavorov Range.

He laments that poor dears were sleeping at the time of Kalibrs arriving to destination. Right... Russians should have waited until they wake up/s. I wonder with what speed NATO propaganda evaporates at this stage from brainwashed nazi minds in 404. It is a good luck when you die fast, but many are not afforded such a treat and die due to horrendous wounds in agony. That's the real war, fellows. They (NATO) forgot to mention to you what it is to be on the receiving end, because they don't know it themselves.
Posted by smoothiex12 at 11:02 AM