Andrey (The Saker) gives a good write up for March 15, with focus on Avdeevka.

Here is what you need to know about Avdeevka: this is the very heavily defended location from which the Ukronazis could unleash their terror against the civilians in Donetsk.  Now that this entire town has been flattened, the people of Donetsk can now finally hope to live in relative (Ukie Smerch MLRS and Tochka-U missiles can still reach Donetsk!) peace. So, not only did Russian encircle the entire Ukrainian forces in an operational cauldron, she then proceeded to cut that single force into two smaller cauldrons (but both still contained in the bigger, operational, cauldron) and now as a show of force, she destroyed the most combat capable Ukrainian unit in the most heavily defended town. The “message” here is clear: we strongly encourage you to lay down arms or else… One Ukrainian blogger even believes that there will soon be (or already are!) three mini-cauldrons (see map with cauldrons in blue).

It is also remarkable against the background of Jake Sullivan's utter failure to convince China to sell Russia out, using a preposterous BS excuse for initiating a meeting with China's Yang Jechi that China provides... military equipment to Russia? Somebody needs to stop getting high in D.C.

President Joe Biden's administration shared serious concerns over China's growing relations with Russia after seven-hour talks Monday between Washington and Beijing officials. Speaking to reporters after the conclusion of the discussions, led by White House national security adviser Jake Sullivan and the Chinese Central Foreign Affairs Commission in the Italian capital of Rome, a senior administration official said that "we do have deep concerns about China's alignment with Russia at the time, and the national security adviser was direct about those concerns and the potential implications and consequences of certain actions."

How about "sharing serious concern" about utter incompetence of what passes in the US for "diplomacy"? This all translates smoothly into what Pepe writes about sanctions.

All the blather about “crashing Russian markets,” ending foreign investment, destroying the ruble, a “full trade embargo,” expelling Russia from “the community of nations,” and so forth –that’s for the zombified galleries. Iran has been dealing with the same thing for four decades, and survived. Historical poetic justice, as Lavrov intimated, now happens to rule that Russia and Iran are about to sign a very important agreement, which may likely be an equivalent of the Iran-China strategic partnership. The three main nodes of Eurasia integration are perfecting their interaction on the go, and sooner rather than later, may be utilizing a new, independent monetary and financial system. But there’s more poetic justice on the way, revolving around the ultimate game-changer. And it came much sooner than we all thought. Saudi Arabia is considering accepting Chinese yuan – and not US dollars – for selling oil to China. Translation: Beijing told Riyadh this is the new groove. The end of the petrodollar is at hand – and that is the certified nail in the coffin of the indispensable Hegemon.

Meanwhile, there’s a mystery to be solved: where is that frozen Russian gold?

All physical gold of Russia is located in the main storage facility of Russia's Central Bank (two third of reserves) at Pravda street, the rest (one third) is equally split between storage facilities in St. Petersburg and Yekaterinburg. 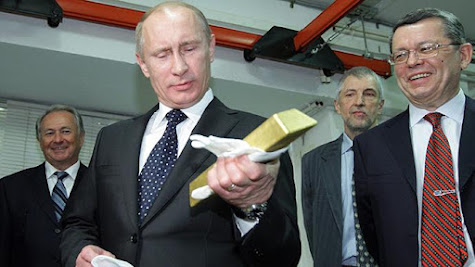 As you may have guessed it--Putin did this photo-shoot not in Fort Knox. Here is the video which explains where Russia's physical gold is.
Sadly, only in Russian.