Yes, the daughter of the last Romanov lineage and one of the most angelic women ever born...

Her beauty was insane, the standard most of modern "Hollywood" sluts will never reach, no matter how they disfigure themselves... It comes with bloods and there is so much to be said about it. Like why Americans were a beautiful nation, and what they are turning into... It will take a separate talk...
Ah, yes, I forgot. The Russian beauty which was born out of Russian peasants somehow replicated that in 1980s in one of the greatest (granted, very cheesy) video clips on one of the most stunning poems about love...
Generally speaking, woman sacrificing herself for a man is not a western tradition today. But then again, what do I know...
Posted by smoothiex12 at 6:40 PM No comments:

Email ThisBlogThis!Share to TwitterShare to FacebookShare to Pinterest
Labels: My latest video

On A Lighter Note For Friday.

If Billie Jean was Irish. Delightful))

Email ThisBlogThis!Share to TwitterShare to FacebookShare to Pinterest
Labels: Friday.

I am a slacker today. But some great stuff from my friends. Larry posts Mr. Helmholtz Smith's excellent sitrep.

RUSSIA IS WINNING THE BIG WAR TOO BY HELMHOLTZ SMITH

Then Saker posts a superb piece by Dmitry Orlov.

Then  Ania speaks to Scott Ritter with focus on Poland.

And all this is just a small part of information stream needed to stay aware for people who are not too heavily engaged with geopolitics. Bernhard also gives some good review:

Newsbits On Ukraine - Swamp Trenches, Short Training, Out Of Ammo

I will talk about NATO "training" soon enough. It is worth describing, because it is dismal.

Email ThisBlogThis!Share to TwitterShare to FacebookShare to Pinterest
Labels: Around the Net.

Me On RT Crosstalk Yesterday.

What Happened To (Once) Mighty Bundesmachine...

This is not a question. As famous Gary Lineker stated in 1990: "Football is a simple game. Twenty-two men chase a ball for 90 minutes and at the end, the Germans always win." Not the case anymore. In 2018 in the World Cup in Russia tens of millions of Russian fans, including millions who love German football, were salivating in their eager anticipation of seeing 2014 World Champions performing a football equivalent of the 1942 Panzer division on the offensive, but instead... Germany lost to Mexico in the opener and then simply bowed out of the group stage to the astonishment of the fans the world over, including by showing a rather unimpressive game.

Boy, enter World Cup 2022. In the group of death with Germany, Spain, Japan and Costa Rica, naturally, everyone expected Japan and Costa-Rica to be a fodder for mighty Germany and Spain, but Japanese had their own plans--first they beat Germany and today they dispatched Spain, topped the group and sent Germany packing, again!! Germany not getting into the play-off of the World Cup twice in a row is akin to Brazil winning World Championship in... ice- hockey. Yes, these are actually legendary Pele's words that Russia will win WC in football, when Brazil wins world championship in ice-hockey. Russians were a good sport and agreed with Pele wholeheartedly, but that is the scale of the event with Germany not getting in the play-offs like this twice. And the geopolitical symbolism here is inescapable. Recall this a few days ago? 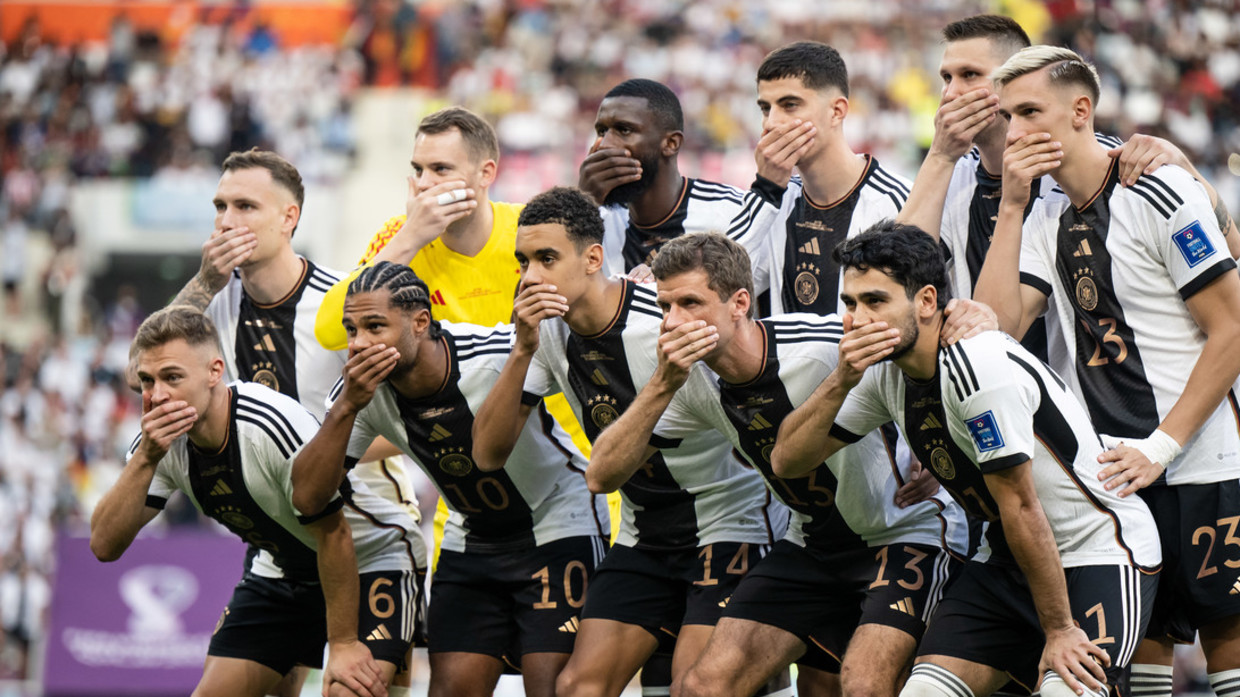 Belgium forward Eden Hazard has spoken out against Germany’s protest against FIFA which took place prior to their shock 2-1 World Cup defeat to Japan on Wednesday. Germany’s players, the German FA (DFB) later explained, took it upon themselves to express their dissatisfaction at the FIFA mandate which stated that any players who wore anti-discrimination ‘One Love’ armbands during World Cup matches were liable for sanctions, including immediate yellow cards. FIFA’s stance is that it believes politics and sport should be kept separate, though world football’s governing body did institute its own ‘No Discrimination’ campaign and provided players with the option of wearing armbands featuring various messages supporting human rights which had been approved by football chiefs. The ‘One Love’ armband is designed to highlight instances of human rights abuses and discrimination in the Gulf state in which homosexuality remains illegal.

Looks like "Go woke, go broke" principle applies here extremely well. This time to football. But it is symbolic across the board when one looks at Germany today. The country is being de-industrialized and culturally obliterated with incredible speed, yet, it seems that Germany is afflicted with mass psychosis--I mean that--and doesn't want to see what is going on. Well, while Bundestag is too busy with condemning Russia, one cannot deny a complete surrealism of the situation. But it is real, and in the manner once mighty Bundesmachine fails to qualify for the best 16, the same could be easily stated about Germany as a whole and this symbolism is, well... very symbolic.

Germany will speed up the procurement of US-made F-35 fighter jets to maintain its capability to deploy nuclear weapons as part of NATO’s shared deterrence, Chancellor Olaf Scholz has said. Russia perceives the global expansion of the US-led military bloc’s reach as a major threat. Berlin needs to be able to deploy nuclear weapons as long as Russia has a nuclear arsenal, the German leader said on Wednesday at a Security Conference in Berlin. Anything short of that “would mean making us vulnerable to blackmail”, he added. Scholz was referring to Western claims that Moscow was threatening to use nuclear weapons to gain the upper hand in the Ukraine conflict. Russian officials have rejected that narrative, saying its warnings were simply a reiteration of the country’s nuclear posture. Russia’s position is that “any military confrontation between nuclear nations, even a conventional one, must be avoided” due to risks of escalation, Russian Foreign Minister Sergey Lavrov said on Wednesday during a strategic security event in Moscow.

Somebody tell this imbecile Scholz that Germany is not a nuclear armed state and never will be, plus, in real, God forbids, war those F-35s will not be able to take off by the time, in case of nuclear exchange, the first salvo of land and sea based nuclear tipped Zircons will reach Berlin. It takes about 3 minutes. Somebody, show Bundestag and German government what happens when you go woke--you fail to qualify. It is one thing to fail to qualify in football World Cup, the real World Cup in geopolitics is a much more serious affair and Germany is not even in the contention there.

I agree, it was the psychological pressure of the truth which made Ursula, as Larry puts it:

Ursula von Der Leyen’s did the unthinkable today — she told the truth. During a speech condemning Russia for committing war crimes, she noted in passing that 100,000 Ukrainian “officers” (sic) have been killed since the start of the SMO.

These are NATO estimates  and they are at the lower end--real number of VSU KIAs is even higher, once one considers how Kiev hides KIAs in MIAs statistics--and they are, especially when considered with wounded ranging anywhere between 3 to 5 times the number of KIAs, are terrifying for Pentagon and NATO. Larry concludes:

As I have discussed previously, Russia’s current military leadership is not following the tactics Soviet generals employed in WW II (i.e., mass troop assaults). Russia primarily has relied on massive artillery and rocket/missile strikes before launching a ground offensive. The Russian rate of artillery fire is unlike anything we’ve seen in history. More importantly, the accuracy of the artillery is enhanced by the use of drones and satellites to adjust fires, with updated coordinates relayed in real time to the artillery units.

Another factor contributing to Ukraine’s horrendous casualties is its lack of air power and effective air defense systems to counter Russian batteries. If Ukrainian troops try to attack a Russian fixed position, their movement by foot or vehicle is unprotected and vulnerable to Russian artillery or combat air.

It appears that some Western analysts who previously pooh-poohed the Russian tactics, are finally beginning to realize that Russia is serious about de-militarizing Ukraine via methodical, grinding tactics. There will come a point when Ukraine runs out of men and cannot field a combat effective force. It appears that day is approaching.

And the question we all must ponder: IS Russian Winter offensive coming once the ground freezes? The forces Russia accumulated around Ukraine are now numbering roughly 540,000 troops (per Douglas MacGregor) and this is slightly less than the size of the force Marshal Tolbukhin had in his 3rd Ukrainian Front (Army Group), including 17th Air Army before Balkans' Campaign and the battle for Vienna. 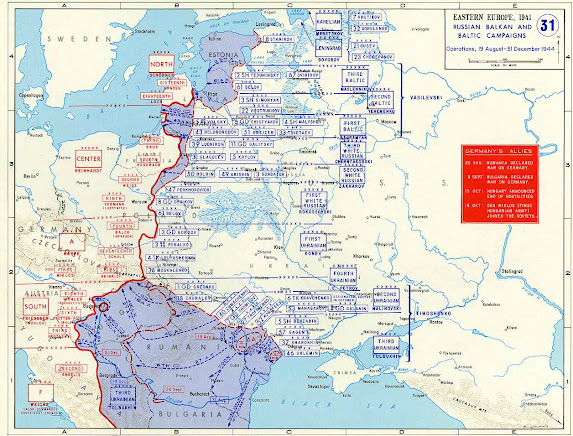 Just some historic reference points. Of course, neither Tolbukhin's 3rd nor Malinovsky's 2nd Ukrainian Fronts, which combined had 1.2 million troops, had everything Russia has today, but one has to begin to appreciate the scale of what is potentially cooking. Yeah, Patton with his 150,000 men was ready to "drive Russians back to Moscow", LOL. He did have issues with math, being dyslexic. What is left to us is to wait and see, but what many eyewitnesses describe unfolding in Bakhmut (Artemovsk) is an industrial scale slaughter of VSU and NATO "volunteers" to the point that nobody simply recovers hundreds of bodies. We can bet our asses on those KIAs being statistically defined by Kiev regime as MIAs. Well, it is in operational encirclement and it will fall at some point of time not far in the future. You heard today that Shoigu announced the completion of training of more than 300,000 troops, right? I wonder why, wink, wink.
Posted by smoothiex12 at 7:22 PM No comments: