POTUS made a declaration in Warsaw in his speech, he stated that Russian economy will shrink two fold (hm, what it reminds me about, I wonder, wink, wink) due to sanctions and then stated something altogether strange--he stated that Ruble to US Dollar going rate is: 200 to 1 (in Russian). Well... Here is March 26 (I mean today) and here is the reality: 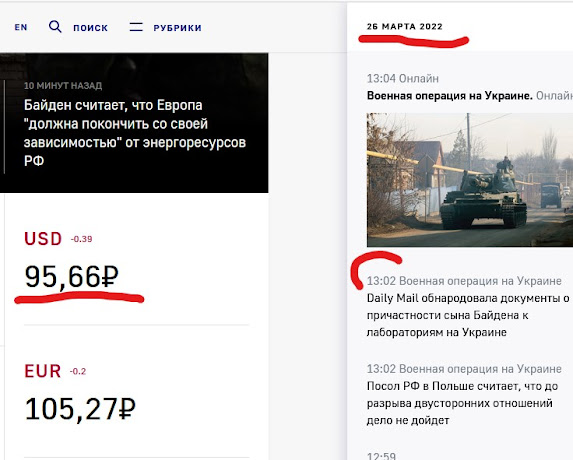 It is the same ol' story about "15,000 KIAs", this time about economy--it is all desperation that makes them lie non-stop top-bottom. They all lie, because they feel the end coming. Pay also attention to the news (in the picture) mentioning Daily Mail, while NY Post also runs this headline:

Russia’s assertion that President Biden’s son Hunter was “financing . . . biological laboratories in Ukraine” was based in truth, according to e-mails reviewed by The Post.

Well, color me surprised... not. As I state non-stop, one has to even lie professionally, by "professionally" meaning making lies believable--they cannot do that in the West due to incompetents dominating corridors of power and influence from Brussels to Washington D.C. Plus, it is my assertion for a long time that most of them in those corridors do not even understand what real economy is and why, even if it would come this, you know 200 Rubles to 1 USD, it would make little difference because Russians want Rubles, not Dollars and Ruble today, unlike it was in the Soviet Union, buys you anything you want, because Russia IS NOT the country of deficit as Soviet Union was.

So, basically POTUS lying openly to everyone merely proves the level of desperation in D.C. regarding this whole 404 business, after all, the US wanted to see Russia getting her nose bloodied there, but it turned out quite differently. Again, I reiterate, those who "planned" Iraq and Afghanistan, it goes logically, would have huge difficulties understanding and assessing what goes on in Ukraine today. I just have one advice--hire more lawyers and PR people, they will show you how to plan and assess military campaigns properly, or how to govern (wink, wink).

Here are VSU soldiers surrendering (Nazis--are a different thing, they will be annihilated or taken prisoners and persecuted):

They will be taken care of (medical, food, bathing, rest) and after filtration will be either sent back home or given an option to form police forces in newly freed regions of Ukraine serving for new Military-Civilian Administrations. Per the amphibious ship Saratov, it is a loss and being a very old ship she will be struck down. The ammo compartment exploded due to hit by cassette warhead and it started a massive fire. The fire was dealt with, but this old ships is a goner.

Mariupol: a drastic drop in intensity of Neo-Nazi response by heavy weapons is reported (they simply are running out of ammo) and the city sees law and order returning. As War Gonzo reports: the actual size of fanatical Nazi force in Mariupol was around 20,000, most of it is annihilated and two pockets which are left and shrinking both contain roughly of 3,000 each. This was yesterday. Judging by reports of very many Nazis trying to escape Mariupol even dressing in women's clothing Mariupol's operation is at its end and most what is left is smoking out a remainder of what was considered the best fighting force in 404, and de-mining the city.

Here are some specimen taken POW by Kadyrov people. I think they might be Azov but I am not 100% sure.

The first thing which is checked for belonging to Nazi groups are their tattoos and then indicators of carrying and using small arms. Then FSB and LDNR Security people take it from there. In Russia, meanwhile, the idea of return to death penalty is now being circulated on the level of State Duma. I think it is about time. Macron meanwhile talks about introduction of coupons for the right to buy groceries in France (Oh, boy, USSR of late 1980s comes to mind) and after watching yesterday people in one of the French grocery stores fighting for vegetable oil, yep, seems like this is coming. Don't tell me that I didn't warn about it. Here is you primer for the weekend.
Posted by smoothiex12 at 1:51 PM