Excellent introduction into narcissists' reaction when they get figured out.

But while human world and the world of geopolitics are distinct, geopolitics is driven not by geography but human reaction to geography and other aspects of natural surrounding which do provide nations and alliance with characters relatable to human behavior. Needless to say, in this excellent intro to narcissists' losing control over their victims present character, that of the losing control narcissist, of the combined West absolutely shines through.

In related news, Welt in Germany opened "second front" today against... and you have guessed it.. Masha and the Bear.

Translation: The animated series "Masha and the Bear" is a Russian export hit. The plot is packed with Russian culture. But is Masha also Putinesque, as has already been claimed? And is the bear propaganda? If you look closely, you won't get rid of a queasy feeling.

Generally speaking, they don't know how else to make Russia "suffer" and European Commission joined "intellectual" forces with IAE and came up with a plan:

IEA: Drive And Fly Less, Work From Home To Cut Reliance On Russia

Here is the summary. 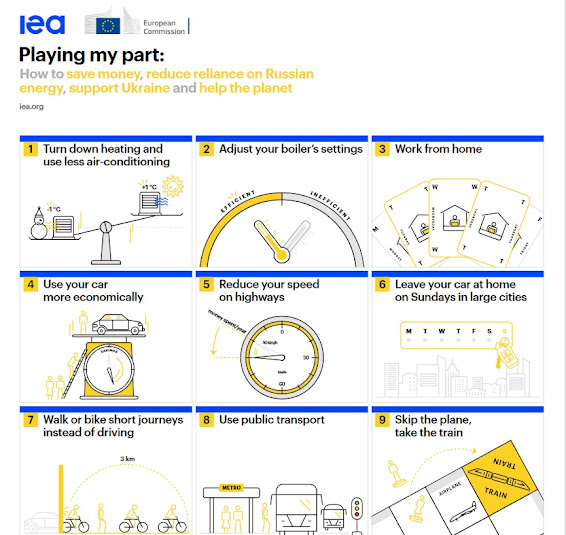 Excellent. Once Masha and the Bear are defeated and EU core nations begin to stink to heavens due to not taking proper showers, full victory over Russia will be declared. Somebody posted in the discussion thread the video of Alex Christoforou lamenting EU committing a suicide, but the issue here is extremely simple--it is not some "weak Scholz" or just "elites", truth is, these are Europeans themselves, especially this so called "middle class", who made sure that people like von der Leyen or Macron are kept in place to finish off the European Civilization. Just watch France, which will finish herself off on April 24 (in three days) and the deal will be sealed. Not that it would have been much different if Le Pen would have won. Not really.

The United States gets its lunch consisting of EU and its industries but that too doesn't change much since the United States suddenly discovers that it barely has enough for itself, especially in terms of what matters the most--energy--and even coming trashing of Democrats at mid-terms changes very little in terms of overall national economic and political health, because the realities on the ground in Ukraine are such that the US made a very wrong bet. It is not surprising, American "elites" are as incompetent and ignorant as their European counterparts.

Per Azov Steel--good decision by Kremlin. Not only Russia saves the lives of her soldiers but makes sure that somebody inside the plant is (are) convinced by hunger, thirst and the onset of Kubler-Ross paradigm to come out and surrender. Or die. Not only Mariupol is liberated but it is the fact that it was the most heavily armed and trained grouping of VSU and Nazi brigades which was supposed to repeat Stalingrad which was annihilated. The plan for defense of this festung was developed in Pentagon and, naturally, it failed. Somebody is hiding there, somebody interesting. Who could this be, hmm? I wonder. Will this or those hiding there commit a suicide in order to not surrender to those nasty Rosskies or will they decide that they may have a chance to be "exchanged" into their native countries? We'll see. It is getting curioser and curioser.