It Is Becoming A Sports Of Sort (Larry Johnson).

And a number of former intel and military professionals around the globe are now catching what could be defined as Pentagon's "experts" with their BS. Larry writes:

As Andrei Martyanov has frequently and correctly noted, the U.S. Army and its legacy officers are demonstrating remarkable incompetence in assessing the Russian military. The latest in this parade of clowns is Joel D. Rayburn, a retired Colonel and current fellow at the New American Foundation. I think Andrei would agree that Rayburn is a poster child for the grandiose fecklessness of retired U.S. Army officers.

Then Larry proceeds to deconstruct this former US Army officer's "analysis" and concludes:

The video evidence emerging from the war in Ukraine is rife with images of bodies of dead Ukrainians and tons of captured weapons and military supplies. If Russia’s Army is a paper tiger, it is doing a remarkable job of grinding the Ukrainian military capability into dust.

But yes, Larry caught "another one" of those "experts" who watched too much of Hollywood and can offer an impressive record of "winning" in such places as Iraq and Afghanistan.

In related news of the SMO, there are reports of two fuel depots, one is military one, being on fire in Bryansk.

The fire broke out on Monday night at an oil depot in Russia's Bryansk, a city in the Rostov region near Ukraine. Local residents report that explosions were heard. Sirens can be heard in social media videos. According to locals, explosions and fire occurred in several districts of Bryansk. According to unconfirmed reports, the second source of fire originates in the area where the military unit of the 120th arsenal of the Main Missile and Artillery Directorate of the Ministry of Defense is located. Emergency services began to evacuate residents of houses near the burning oil depot. The Ministry of Emergency Situations confirmed the fact of ignition. Officials have not yet commented on the causes of the incident.

Right, the last phrase is crucial, but you can bet your ass on that all those telegram-channel "warriors" already "established" the cause:

Translation: Mi-24s may reach, Bayraktar TB-2 does reach (most probable cause).

Wow. I wonder why those people are not leading armies or are not in charge of FSB yet, because the most probable cause is sabotage, as was the case with a couple of other objects in Russian territory (with the exception of the recent two ukie Mi-24s attack on border town). The fact that these Russian telegram "experts" do not even anticipate operations of SBU DRG (Diversionno-Razvedyvatelnye Gruppy), diversionary groups that is, which ARE operating in border regions of Russia betrays immediately "know it all" arm-chair "strategists". Reality, of course, is that any variant is possible, but it is obvious that Bryansk is located in 100 kilometers from 404 border and same as Kursk (96 kilometers from 404 border) or Orel (101 kilometers) is totally within the range of of DRGs and its southerly approach is completely covered in forests. 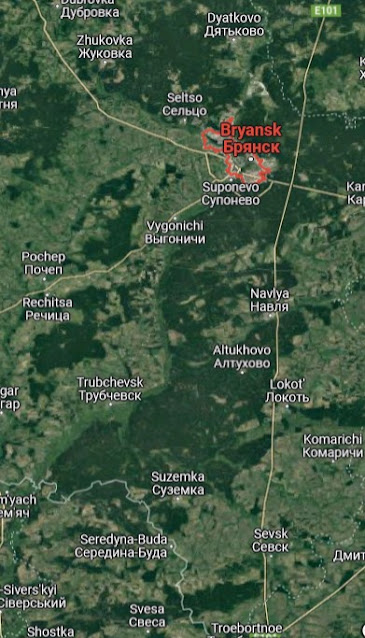 This terrain is perfect for diversionary operations and that is why this kind of activity will continue until FSB eradicates (and that is a long haul operation) both sleeper cells and ukie diversionary groups. Both are contingent on establishment of the military-civilian administrations and security services on liberated territories of Ukraine. These are realities of the war and that is why Russia's regions bordering Ukraine are operating under many limitations such as closure for the commercial air-traffic. But as is the case with RKR Moskva, all those arm-chair "strategists" are ready to offer their versions of the events even before any reliable conclusion could be made.
Here is heroic Eva Bartlett doing the job of preserving journalistic integrity and ethics.
Western MSM are not journalism, they long ago sided with Ukrainian Nazism and as such are nothing more than war crimes enablers. But, the fact that this astounding number of US military and intel "professionals" continue to spew absolute propaganda and base their "analysis" on the "intel" feed from Kiev is a huge reason for concern, as it would be for acute appendicitis patient being prepared for operation on him by an auto-mechanic or accountant. We can easily predict the outcome of a routine surgery. The analogy easily applies.
Posted by smoothiex12 at 8:47 PM