.... Russian senior marine officer. While US generals who spew BS on Russian operation in 404 continue to parade themselves as nothing more than propagandists, here is a good glimpse by Vladislav Shurigin (a famed Russia military journalist) into what is going on in reality.

Translation:  “Why are you talking about deadlines all the time? We need to talk about something else! When we are done with Azovstal, we will have ten thousand of the best fighters in the world under arms, hardened by a month of the hardest urban battles, with which we will move on. And Ukraine will receive fifteen thousand corpses of its most stubborn and trained Nazis. Therefore, today I do not count them dead - this makes no sense. Let's destroy everyone! Today I, first of all, take care of my fighters. Each of them is worth its weight in gold. And for "Azov" in the Russian army there are enough remote means of destruction. Calmly, methodically and without any glory for them. Urban disinfection of rats…”

Read the whole thing using Google Translate. A lot of good info in there, including dispelling all those myths about some fighting qualities of VSU. He also admits the surprise with the brainwashing of VSU in the first days of SMO which has created a bit of a confusion, which was fast overcome. This single interview debunks most of BS spread over in the West. Which brings us to Larry Johnson and his (correct I may add) assessment not just of the Russian Army, but West's BS:

Despite U.S. and NATO stubbornly insisting that the Russian military is a clown show incapable of fighting competently, you only need to note that Russian military units, missiles and aircraft are moving freely around Ukraine. Take a look at the following video that shows a Russian field kitchen and laundry. Maybe this is just a sophisticated piece of propaganda, but if it is legit then it shows a capability not widely available in the U.S. Army. We have become accustomed to setting up static bases, mess halls and laundromats overseas that hire 3rd world folk to cook our food and wash our dirty underwear. Take note of what the Russian soldiers do when they enter the mess trailer (they remove their cover and hang it on a wall). This is not a picture of untrained conscripts grudgingly being thrown into battle.

Also, read the whole thing by following this link to Larry's blog.

In related news, as was expected, US (primarily) controlled regime in Kiev denied those left in the bunkers of Azov Steel the right to surrender. Well, what can I say, the birds are flying again.

The FAB-500 "presents" will (not may, even Shurigin's interview touches on the myth of Azov Steel) ensure that this piece of land where those hapless up to 3000 Nazis (most likely much fewer by now) are hiding underground will be flattened, including underground hideouts. 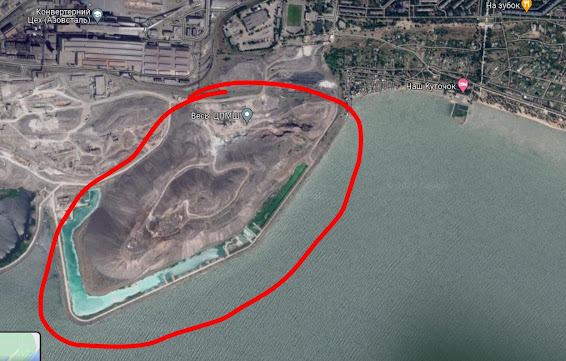 This is the piece of land where (or rather under which) all those remnants of Azov and VSU are hiding. This night one of the Commander of the VSU Brigade and 50 of his "heroes" tried to break out. Bad idea. The colonel whatever his name was liquidated together with his "escort", those who survived were taken prisoners. So, here is a primer for Sunday.
P.S. In funny news:

FORT IRWIN, Calif. (AP) — In the dusty California desert, U.S. Army trainers are already using lessons learned from Russia's war against Ukraine as they prepare soldiers for future fights against a major adversary such as Russia or China.

The reason this is funny because you cannot train (nor buy) moral aspect of training because, as I repeat non-stop, NO US military person top-bottom ever fought in defense of their land, their families, and their well-being. You cannot "train" this, no matter how desperately you try. Without this factor any US war against military "peer" will have a sad outcome for the US military. Much better professionals than US Army tried it before with Russia, didn't work out for them. But then again, the way military history is taught in the US in 9 cases out of 10, there is no surprise with the US military's record in the last 20 years.
UPDATE: Another 700 VSU surrendered today in Mariupol.
So, the process of removal of remnants continues in Mariupol.
Posted by smoothiex12 at 12:32 PM