About this British dude, a soldier of (mis)fortune who watched too much Hollywood and was in a position to shoot at people with almost impunity. As was stated by many already on many occasions, war with Russian forces is different.

What needs to be understood is that there are consequences for all our decisions. And as Andrei Raevsky correctly notes, and I quote:

His family, meanwhile, begs for him to be treated kindly (read: opposite to how Russian POWs are treated)

I understand their purely human concerns, but, frankly, this is not how it works, not to mention the fact that he does not qualify to be an enemy combatant.

His parents could be 100% sure that he will not have his throat slit or joints blown by point blank shots from AK-74, nor that he will be tortured, as Russian POWs are in the captivity of the regime this British dude decided to support, but he is still a mercenary. Of course, now he begins to sing this oh so familiar song which now thousands of VSU and Nazi POWs sing. It is the same across the board: I didn't do actual fighting, I am a cook, I am just a driver, I am whatever is not getting me court martialled for war crimes. Well, they are not the first, nor they are the last ones to sing such a song.

Now some sitrepish clarification. There was a number of strikes today on Kiev (some of them rather dramatic) but make no mistake--it has nothing to do with the sinking of RKR Moskva, but everything to do with the warning Russia issued couple of days ago when the damage to railway in Orel Oblast was detected, obviously by VSU diversionary group. It was stated that this type of activity on Russian territory will be punished. A day later two VSU helis attacked township of Kilimovo in Bryanks Oblast of Russia and destroyed some civilian property and 8 civilians got wounded. 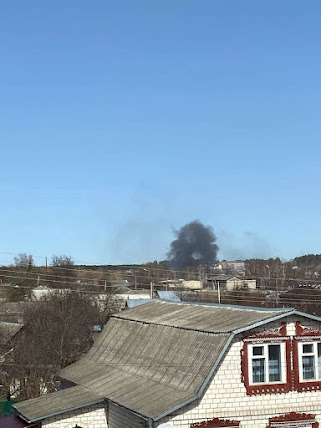 Here is Klimovo on the map: 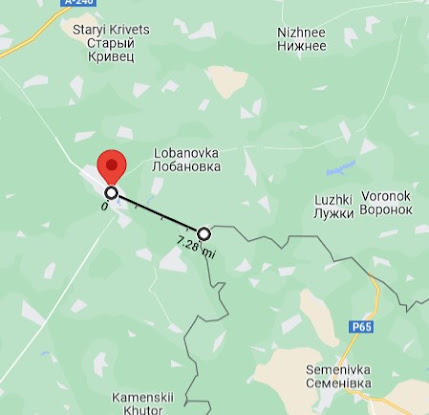 It is around 11 kilometers from Russian-Ukrainian border and is surrounded by forests and ravines which make approaches by low flying helis extremely difficult to control by Air Defense and this is the terrain which VSU wants to use to attack Russian border towns and villages. This is a second such attack, the last one was against civilian gasoline facility in Belgorod region, so the response will be on Ukraine's government facilities, which have been for now not on the list of the targets. Our very own Larch already compiled such a list:

1) Ministry of Defense of Ukraine - Povitroflotsky prospect, house No. 6;

2) General Staff of the Armed Forces of Ukraine - Povitroflotsky prospect, house No. 6;

3) Main Directorate of Intelligence of the Ministry of Defense of Ukraine - st. Elektrikov, house No. 33 (earlier strikes had already been made in that area);

4) Headquarters of the Ground Forces of the Armed Forces of Ukraine - st. Degtyarevskaya, house number 19;

1) The Headquarters of the Supreme Commander, presumably, is located in the bunkers of the office of the President of Ukraine in Kyiv on the street. Bankova, house number 11. Another bunker may be located in the plane of the Arsenalnaya metro station - this is the deepest station in Europe;

So, we will see later today the results of such retaliation. Obviously the story with bioweapons is getting bigger and bigger with each day and we may only speculate what kind of nervous reaction it creates in D.C. and Brussels.  But that is a separate topic, many names in the US and Europe tied to this program are already known, including experiments with infecting the patients of Ukraine's mental facilities with different strains of illnesses developed in those labs. Hm, it reminds me of something, I can not put the finger on it somehow, my memory is a bit fuzzy... Unit 731... maybe it is because I didn't get enough sleep... Dr. Mengele... Nah, cannot recall what it reminds me of...