Many People Had It...

... me included with this BS-tank Institute for the "Study" of War.  Recently Bernhard of MoA had it, now Larry had it too. In his latest he deconstructs a total BS this "Institute" produces under the guise of military analysis.

The so-called Institute for the Study of War aka ISW (i.e. https://www.understandingwar.org/) has no sense of irony, especially with the name of its website–Understanding War. The analysts at this outfit show they understand little. Russia announced it has secured all of Mariupol with the exception of the Azovstal Steel Plant. Here is the map of the facility:

Here is how the ISW dealt with the claim:

The Kremlin declared victory in the battle of Mariupol. Russian forces will attempt to starve out remaining Ukrainian defenders in the Azovstal Steel Plant rather than clear it through likely costly assaults.

I am struck by the phrase, “Russian forces will attempt to starve out remaining Ukrainian defenders.” Precious. The Ukrainian force that tried to prevent the takeover of the city of Mariupol numbered at least 8,000 men at the outset. About 1500 of that number have surrendered to the Russian force. There are reportedly only 2500 Ukrainian soldiers holed up in the steel plant. For those of you who are math challenged, that means at least 4000 Ukrainian soldiers killed in action.

Read the whole thing, it is worth it.

In other, very peculiar (wink, wink) news, something which some in Russia view as an open mocking of EU by London and D.C. Why so? Get a load of this:

Translation:  LONDON, 21 April. /TASS/. The UK Treasury has granted a general license valid until May 31, allowing it to conduct transactions with Gazprombank, which fell under the sanctions. This is stated in a statement released on Thursday by the Financial Sanctions Administration of the United Kingdom. "The license comes into force on April 21, 2022 and expires on May 31, 2022," it says. The agency clarified that the permit was issued taking into account the interests of companies from EU member states that make payments for Russian gas through Gazprombank.

Ah, so nonchalant, so matter-of-factly, so... so mundane. Just like that: paying to Gazprombank either in Rubles or in foreign currencies but to Garzprombank currency accounts IN Russia, where the payments then converted to Rubles and  the gas is released. You see how easy it is? So, BoJo, while being an incompetent freak-show and a disgrace for London is not entirely incorrect when stating this:

Russian President Vladimir Putin is like a crocodile chewing on Ukraine’s leg, British Prime Minister Boris Johnson told reporters on Thursday, while traveling to India. He said that he didn’t see how Kiev could possibly negotiate with Russia, and added that the West would keep sending artillery and other weapons to Ukraine. “It’s very hard to see how the Ukrainians can negotiate with Putin, given his manifest lack of good faith and his strategy, which is evident, to try to engulf and capture as much of Ukraine as he can and then perhaps to have some sort of negotiation from a position of strength – or even launch another assault on Kiev,” Johnson said.

He IS correct to a degree, with only one difference, Russia and Putin are collective crocodile, but they chew on a much larger prey than Ukraine, and it is combined West which has its leg and something else in this crocodile's jaws and BoJo's frustration shows. 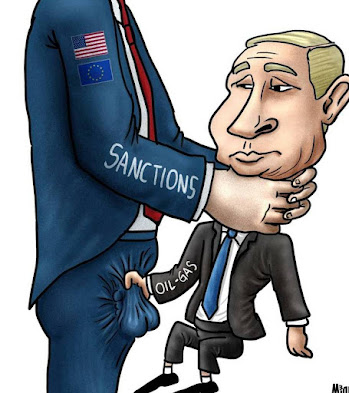 Not that modern UK "elites" are educated or cultured, they mostly produce pedophiles (Netflix, I am coming to watch Jimmy Saville and his enablers story),  and bimbos such as Liz Truss. Or, for that matter, specimens like BoJo, but his frustration is understandable, especially against the background of, well, submitting to Russia's demands to pay the way Russia wants for her products. Tantrums of its dimwit "elites" is what modern West known for today. Really, no class whatsoever. But then again, what do you expect from children?