But Swedish Aftobladet came out today with such title for its interview with Russia's Ambassador to Sweden:

Which translated to Russian as: Pardon our language, but we don't give a shit (or shit on) about your sanctions. Of course, Russian Ambassador to Stockholm did no such thing, what he said was: we spit on your sanctions. But truth is, Swedes got the message right. I am sure Russian Ambassador was certainly thinking about it, moreover, was probably thinking in much-much more profane terms than very timid "shitting on West's sanctions". Something tells me that he was thinking more along the lines of not bowel movement, but sexual intercourse with both sanctions and those who impose them. Russian language is insanely rich in describing all kinds of perverted things you can do to someone or something you don't care about and, believe me, even many edgy porn sites would think twice before trying to recreate those in reality.

Ukrainian President Volodymyr Zelensky has called on his US counterpart Joe Biden to fly into Kiev “in the coming days.” The invitation, which was made by Zelensky during a phone call with Biden on Sunday, comes as several nations, including the US itself, ordered most of their diplomatic staff out of the Ukrainian capital citing fears of a possible Russian invasion. "I am convinced that your arrival in Kyiv in the coming days, which are crucial for stabilizing the situation, will be a powerful signal and contribute to de-escalation,” Zelensky told Biden according to a statement put out by his press service. As the US, UK, Israel, Australia and other countries have urged their nationals to leave Ukraine by all means available, Zelensky insisted that Kiev, as well as other major Ukrainian cities, were “safe and under reliable protection.”

Poor-poor dear, only now he begins to understand the game that he and his country of 404 are disposable and will be sacrificed at the altar of America's interest in prolonging her own agony. Sovereignty is a bitch--you either have it or you don't. 404 has NO sovereignty whatsoever and is run from Washington, not Kiev. The ONLY question now is if Russians will accept Ze (if he survives) and give him asylum in Rostov-on-Don as was done to Yanukovich and was offered recently by Putin to Poroshenko. Russia really needs to consider now starting a cottage industry of giving asylums to Ukie presidents in Rostov-on-Don.

On a more serious note, I think we are nearing false flag, because the United States literally cornered itself and has no good scenarios of extricating itself from this mess without losing whatever is left of the US "face".  It all reminds me a famous episode of The Family Guy where Stewie after roughing Brian up for a monetary debt, begins to expect retribution:

I am on record: strategic ambivalence of Russia is terrifying for the US now because the US doesn't know what will follow after the false flag, granted this false flag succeeds to dupe European poodles into utter submission. But here we enter the speculation territory and a field of secret diplomacy which is called secret for a reason. Is there one between US and Russia now? I don't know, I see nobody in the US currently who you can talk to.

In related news, the details of recent contact with the US sub around Kuril islands are made public in Russia. This Virginia-class sub was detected by Russian sub (most likely some SSK but may be even SSN from Kamchatka), Il-38N did a sweep and later Marshal Shaposhnikov used it sonar to "ask" the guest to leave Russian waters (in Russian). In real war, God forbids, this sub would have been sunk. There are many things which happen now and which are not noticeable by laymen, but "messages" are being conveyed non-stop. One of them is the latest and freshest Report by National Defense Industrial Association (NDIA) on the state of the US defense industry. I didn't have the chance to read it in full yet, but what I saw is startling, which explains why I am correct when stating that the United States lost the arms race to Russia and is beginning to lose it to China.

Here is a peculiar table about the interest of the US "purse holders" (that is US Congress) in "emerging technologies" from that report: 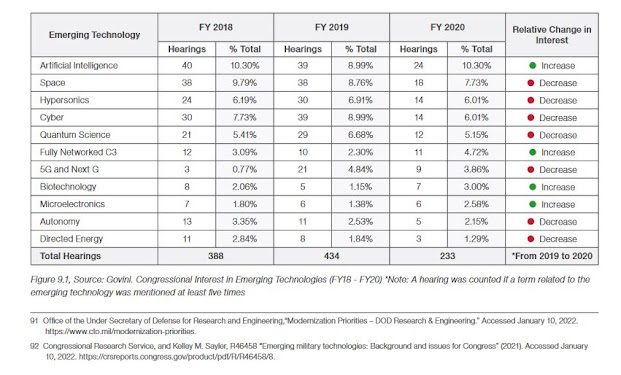 Wow! They literally do not know what they are dealing with. You can read the whole thing here. So, get a pop-corn and get ready--it will be one hell of a ride.
Posted by smoothiex12 at 3:23 PM