Russia moved TU-22M3s with X-32 missiles and MiG-31K with Kinzhals to Khmeimim in Syria. As stated by Russia's Defense Ministry "for naval exercises" in Med (in Russian).

This is not so subtle message to NATO fleets now deployed in Mediterranean. As was predicted from the inception (in 2018), and thanks to our friend Evald--this allows Russia to control most of Mediterranean. 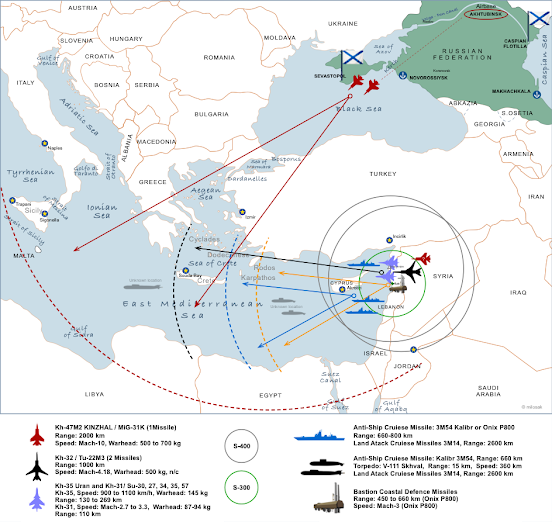 It also ensures a cooling effect for operations of any number of the US Navy's CBGs--the only tool which the US has at its disposal for creating a mayhem.

Bernhard of MoA did a very good write up on the "Russian invasion" scam and, quoting one of the last remaining true American diplomats and thinkers, Esteemed Jack Matlock describes one of two major reasons fro this "invasion" BS:

Maybe I am wrong – tragically wrong – but I cannot dismiss the suspicion that we are witnessing an elaborate charade, grossly magnified by prominent elements of the American media, to serve a domestic political end. Facing rising inflation, the ravages of Omicron, blame (for the most part unfair) for the withdrawal from Afghanistan, plus the failure to get the full support of his own party for the Build Back Better legislation, the Biden administration is staggering under sagging approval ratings just as it gears up for this year’s congressional elections. Since clear "victories" on the domestic woes seem increasingly unlikely, why not fabricate one by posing as if he prevented the invasion of Ukraine by "standing up to Vladimir Putin"?

The other reason being, of course, beating NATO poodles into utter submission. Read the whole thing. Once you read about this "Tiger Team", it becomes utterly hilarious in terms of level of "planning" and "strategery". Meanwhile Olaf Scholz expressed his satisfaction that Germany's Year in Russia allowed to cover all spectrum of Russian-German interaction, including culture, science, ecology, sustained development and gender diversity... No comments.