The channels are open between the US and Russia and this is just a brief glimpse into what I believe is an active bargaining happening behind curtains.

Russia and the US have managed to achieve “significant progress” in talks over resuming nuclear inspections within the New START treaty, Russian newspaper Izvestia reported on Thursday, citing the Foreign Ministry. The sides are also apparently mulling face-to-face negotiations to remedy remaining issues. According to the Russian Foreign Ministry, as quoted by the outlet, Moscow and Washington are looking into reviving mutual inspection of nuclear arsenals. The ministry noted that the US and Russia are negotiating “over relevant channels” on how to return “to the full implementation of the treaty” in the element relating to verification mechanisms. It went on to say that the sides are holding virtual talks within the New START bilateral consultative panel. “At the moment, the possibilities for holding its next session in face-to-face format are being explored,” the ministry added. Russia and the US are also discussing “what organizational and technical problems need to be solved,” it told the outlet, adding that “significant progress” has been made to remedy a number of issues, but some “considerable difficulties remain.”

US interest is understandable--it is to somehow gain a glimpse into the new Russian technologies and START inspections are one of such channels. US is keenly interested in RS-28 Sarmat and, naturally, to get near Avangard. And this is just the part of it. As Larry correctly stated during our meeting at PolitWera a couple of weeks ago, the US increasingly finds itself trailing across the board in deterrent and, in a view of Russia deploying a new generation of fully strategic ABM capable systems such as S-500 and A-235, there is a chance, however remote now, that the lag will become so huge that the US deterrent will begin to lose its credibility, and the only option for the US will be a preemptive nuclear strike on Russia. It is not as fantastic as one may think and that is why such consultations are important.

Meanwhile VSU wins the war so magnificently that its C'n'C decided that NATO must strike Russia with nuclear weapons. Moscow reacted immediately:

Translation: MOSCOW, October 6 - RIA Novosti. Vladimir Zelensky's statement about a preemptive strike against Russia essentially means a call for the start of a world war, said presidential spokesman Dmitry Peskov. According to him, in the event of a conflict, the consequences will be monstrous and unpredictable. The presidential press secretary noted that all countries, especially the United States, Great Britain and members of the European Union, should pay attention to the statements of the President of Ukraine. He stressed that these words should not be left without the reaction of the world community. In addition, given the fact that Washington and London actually direct the activities of Kyiv, they are responsible for the words of Zelensky, Peskov stressed.
Zelensky proposed this strike while speaking to Australia's Lowy Institute and you can bet your ass on Western media trying to ignore this. In the same time--this is the level of Western academe and "research" which explains why combined West finds itself today where it is and why things are going increasingly bad. With "guests" like Kiev's clown and genocidal maniac I am sure they all get a clear picture of the events. Nah, I am screwing with you. But yes, Ukraine is about to defeat Russia and that is why they need a preemptive nuclear strike. It is a classic Sun Tzu stratagem: 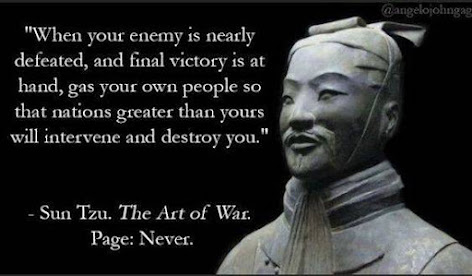 So, creatively applying this stratagem we may say that when you are about to defeat Russia and final victory is at hand (this is what Petraeus, Keane and other US generals say) preemptively strike this damn country with nuclear weapons ensuring that all life on Earth is destroyed. But, if you saw a typical VSU "offensive" yesterday (at Larry's blog) you may have already a basic understanding of what those "advances" are. Not to mention that yesterday all of them have been rolled back. But in the internet Ukraine celebrates non-stop victories. Dmitry Medvedev, however, summarized the economic war of Russia very succinctly:

Translation: It is useless to appeal to the common sense of our enemies in the West. It is also not necessary. The enemies must be forced (by us) to beg for mercy in the lost economic battle. And we need to complete this battle with their full unconditional capitulation.
This is exactly what is happening. Remember--political objectives of war?
P.S. Will Russia give the US a way out? Not impossible, but for now--unlikely.
Posted by smoothiex12 at 11:44 AM