... a day of appreciation for Russian  KGB agents, LOL)) 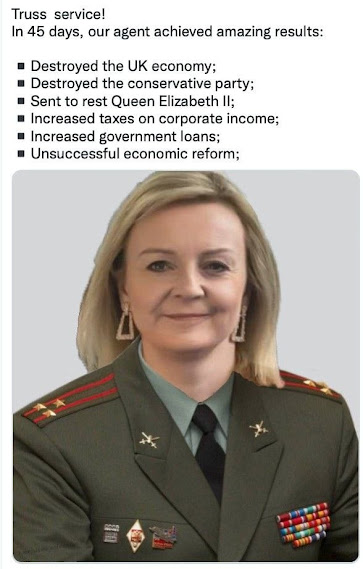 I wonder in what discipline Liz Truss got her Master of Sports of USSR title (the left-most pendant)? Boxing? Track and Field? Yes, track and field, most likely sprint--because she finished her distance with an amazing result--45 days, best ever in British history. My congratulations to KGB Colonel Elizaveta Trasova, a humble girl from Altai region, on her amazing accomplishments. And now--discotheque.

We were supposed to see Marc in 2020 at Mount Vernon, WA. But then COVID-19 happened and we refunded out tickets. Marc is more than just (possibly Freddy's unknown son--Freddy was bisexual, actually) an amazing living tribute to late Freddy--that is why I do not follow Queen with Adam Lambert, despite his amazing vocal abilities--but Marc Martel is a monster of a singer in his own right. But as one guy stated--Freddy's voice was a miracle, and miracles do happen again:

But I want to re-post again this masterpiece, re-imagining...
This is a golden standard... and I cannot wait to see Marc in our neck of the woods...
Update: Ah, hell with it, since I introduced KGB Colonel Mary Elizabeth Truss, why don't we remember American liberal and, actually, movie star Dean Reed who projected everything it was great about American man in 1960s and 1970s, when he moved to USSR and, later, GDR. Most Soviet women were desperately in love with him.
Let's face it, he was projecting America. Unlike it is today when RuPaul types dominate US culture.
Posted by smoothiex12 at 2:08 PM