... from the get go. This is for those who are still looking for "doves" in Kremlin (Hint: Kremlin doesn't have "doves").

Russia is open to negotiations over Ukraine, but any agreement with Kiev would have little credibility because it could be rescinded by the West, Kremlin Press Secretary Dmitry Peskov said on Sunday. This means that any possible settlement should be primarily discussed with the US, he added. Any unilateral diplomatic engagement with Ukraine is unlikely to succeed because “the deciding vote rests with Washington,” the spokesman told Rossiya-1 TV channel. “It’s just impossible to discuss something, for example, with Kiev,” he stated. According to Peskov, while Russia could try to reach some agreements with Ukrainian President Vladimir Zelensky, “based on what happened in March, these agreements are worthless, because they can be instantly canceled upon orders” from outside actors.

Cannot get any clearer than that. As for people who still insist that Kremlin is run by 15 year olds who do not see what anyone with IQ above room temperature does, again, read Peskov's formulations.

Potential talks between Russian President Vladimir Putin and his US counterpart Joe Biden would depend on Washington’s willingness to hear Moscow’s security concerns, the Kremlin press secretary said on Sunday. Speaking to the Rossiya-1 TV channel, Dmitry Peskov said high-level re-engagement could happen if the United States “pays heed to our concerns.” It would be contingent on “the US desire to go back to the state of things as of December-January and ask the question: what the Russians are offering may not suit all of us, but maybe we should still sit down with them at the negotiating table?” The spokesman explained that he was referring to the draft documents on security guarantees that Moscow submitted to both Brussels and Washington before the Ukraine conflict broke out in late February.

Remember December 2021 "Ultimatum"? I remind you about this "Ultimatum's" key clause:

We just make it clear that we are ready to talk about how to translate the military scenario or the military-technical scenario into a political process that will actually strengthen the military security <...> of all states in the OSCE, Euro-Atlantic, Eurasian space. If this is not going to happen, then we have already designated them (NATO - TASS comment), then we will also switch to this mode of creating counter-threats, but then it will be too late to ask us why we made such decisions, why we have deployed such systems, "

I will repeat fundamental truism of wars--wars are not fought for optics (well, only US fights them like this), they are fought for political aims which range from economic, to security, to religious and other reasons. Russia is a classic example, even during ideology-driven Soviet times of a complete subordination of military to national interests. An Exhibit A of the opposite are the US Armed Forces which are primarily (not completely) a launder-mat for the US Military-Industrial-Congressional-Media Complex. Hence, this radical difference in both philosophy and design behind weapon systems and TOE of Russian and NATO armed forces.

Let me remind you how I described then (December of 2021) measures Russia will take upon the absolutely anticipated sabotage by the West of Russia's demands laid out in this "Ultimatum".

I am ON record for years: Russia has both overwhelming military advantage and escalation dominance in the Eastern Europe, thus the threats in case US (NATO) decide that they want to continue to play dumb:

a) Removing guarantees of non-invasion of 404 and, in fact, preparing for regime change in Kiev. If need be, NATO intel installations and troops' bases could be wiped out (possibly without warning) as a warm up.

b) Russia will position hypersonic weapons, including nuclear-tipped near NATO members (such as Baltic States) and may in addition:

d) Russia will supply China with earlier versions of 3M22 (possibly Kinzhal) and will ensure that China has a decisive advantage over US and Royal Navies in her First Island Chain, while simultaneously providing China with latest AD/AM defense. S-500 may appear there even earlier than in India.

e) There is some pool of Russia's weapon systems we haven't seen yet and I can only imagine what those can do. I think some people in Pentagon have an idea and they wouldn't want to deal with that.

f) Russia, certainly, will accelerate the rearmament of pr. 949A to 949AM and pr. 971M SSGNs to carry 3M14 Kalibr and P-800 Onyx and will return them to patrols along both shores of North America.

3. Russia understands the split with the West and is ready to take any consequences, including, already declining, shrinkage of trade and reduction of the supply of hydrocarbons to EU. Let the US deal with it... Ah, wait, US is making a killing in South East Asia selling its LNG and, frankly, EU is not a competitor with Asian economies which do not even bargain--they just buy all energy whatever the price. If Europe wants to say something to Russia--individual countries can go to Moscow and see if Moscow cares.

As recent experience shows, even a single deployment of the Belgorod  (K-329) submarine to Kara Sea recently created a panic of sorts in the Western media, so much so that following Russian proverb that "fear has a very large eyes", that even H.I. Sutton confirmed it by posting instead of Belgorod photos of the good ol' Yankee Stretch (pr. 667AN/09774 conversion) thinking that it was Belgorod. 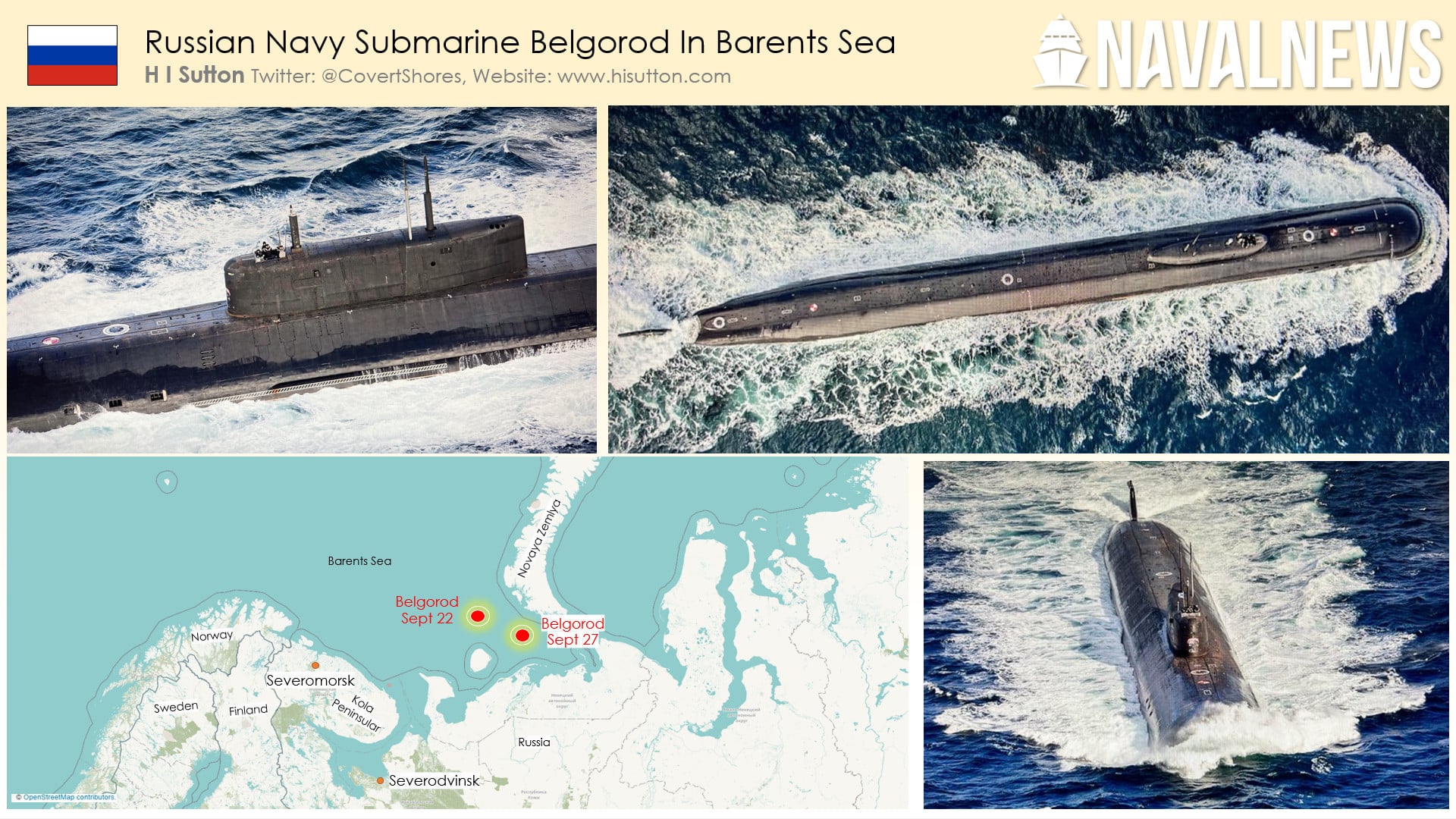 It was not. It was Orenburg or one of many other iterations of the venerable Ivan Washingtons of the Soviet Navy (in Russian). But real panic there was, no doubt about it.

A top-of-the-line Russian nuclear-powered submarine has gone missing from its harbor in the Arctic along with its rumored "doomsday weapon," according to multiple reports. NATO has reportedly warned members that Russia's Belgorod submarine no longer appeared to be operating out of its White Sea base, where it has been active since July. Officials warned that Russia may plan to test Belgorod's "Poseidon" weapons system, a drone equipped with a nuclear bomb that Russia has claimed is capable of creating a "radioactive tsunami," according to Italian media. The drone can be deployed from the submarine at any time and detonated at a depth of 1 kilometer near a coastal city. Russian state media has claimed the device can create a 1,600-ft. wave that smashes into the coast and irradiates it.

Belgorod is now back in base, but what was she doing, while missing, in Kara Sea or what she may have deposited there we may never know. Let us say that Belgorod was busy with creating the framework for future "negotiations" with the US on surrender. After all, militaries exist for achieving political objectives of wars. Political objectives of SMO are pretty clear--a removal of Kiev's Neo-Nazi regime and forcing NATO back where it was in 1997. Meanwhile two items are being grossly under-reported in Western media (not at this blog) and they are:

1. Simply astonishing performance of Russian air-defense, which simply guarantees catastrophic losses for any combination of forces (meaning NATO) trying to strike Russia from air--a foundation of the American "way of war".

2. But this one is even more impressive--without much ado Russia mobilized 300,000 personnel--granted, not without some bumps on the road, a courtesy of Mr. Serdyukov's "reforms"--and was able to reinforce Russian forces in former Ukraine within weeks, with more trained personnel pouring into the front line units as I type this.

Needless to say, such mobilization and public support in Russia--despite propaganda BS spewed by Western media--is simply impossible in the modern West, not to mention the fact that Russia's immediate mobilization resource is around 2.5 million people. With up to 20 million others in reserve. So, unless one exists in the alternative universe created by NYT, WaPo, MSNBC and other representatives of media and human sewer in the US (same applies to America's lapdogs in Europe), one can see where it is all going. And Peskov mentioning this December 2021 "Ultimatum" is not accidental. It is Putin's "algorithm" which many now begin to notice--each next Putin's offer will always be much worse than the previous one. Ukraine, meanwhile, fast becomes non-negotiable.