The United Kingdom has rebuffed Russia’s accusation that it orchestrated an attack on the Nord Stream pipelines in the Baltic Sea. The statement came hours after Moscow claimed that the Royal Navy was involved in the explosions. Writing on Twitter on Saturday, the UK Ministry of Defense claimed that Moscow “is resorting to peddling false claims of an epic scale” in an effort to detract the global community from “their disastrous handling of the illegal invasion of Ukraine.” The ministry went on to denounce the accusation as an “invented story” which “says more about arguments going on inside the Russian Government than it does about the West.” Meanwhile Maria Zakharova, the Russian Foreign Ministry spokeswoman, has signaled that Moscow intends to draw the attention of global community and the UN Security Council to “a series of terrorist attacks against Russia in the Black and Baltic Seas” and to Britain’s involvement in the matter.

UK can deny whatever it wants, but as someone mentioned today in Russian media, London is the US' subcontractor for terrorist acts. I agree, this is the extent of the competences of the modern British Armed Forces and grossly oversold, through James Bond's comedies, intel services. Ask poor Skripal's cat. When Russia's MoFA and MoD make such claims it means Russia has a truckload of evidence to back such claims up. That also means, that after the attack on Sevastopol, which was successfully repelled by the Black Sea Fleet (one minesweeper was damaged), and which also has British ears protruding behind it, London received the black mark. I will remind you the event from June last year when, responding to HMS Defender's provocation in the Black Sea near Russia's territorial waters, Vladimir Putin stated:

Translation: MOSCOW, June 30 - RIA Novosti. Russian President Vladimir Putin said that even if Russian ships had sunk the British destroyer Defender during the recent incident off the coast of Crimea, World War III would still not have started.

LONDON, Oct 27 (Reuters) - A senior Russian foreign ministry official said that commercial satellites from the United States and its allies could become legitimate targets for Russia if they were involved in the war in Ukraine.

Unlike the mighty Iraq or even mightier Afghanistan, Russia, being a backward country, facing "the finest fighting force in history"(c), can make sure that this force's eyes and ears are gone from orbit really fast. But, as Larry Johnson correctly notes, those "teeny-weeny" logical inconsistencies in America's premier military mind General Petraeus'--nah, I am screwing with you;))--are telling, very telling. Responding to Petraeus' assertions that "THERE IS NOTHING RUSSIA COULD DO to change the situation on the frontlines." Larry reasonably responds:

Got that? “THERE IS NOTHING RUSSIA COULD DO to change the situation on the frontlines.” Game over. The Russians are beat. So, here is the question–If the Russians are trapped and destined to lose; if the Russians can do nothing to change the inevitable outcome of the war, which means their total defeat, then why does Petraeus do a volte face stating that U.S. intervention could be necessary? This contradicts the meme that the Russians are beat, Putin is toast and Ukraine can see Moscow in the distance. Petraeus, inadvertently displaying his dull intellect, tells the reporter that Ukraine may not have the war wrapped up and that the United States “MAY” lead an international rescue team into the conflict

The explanation for that is simple--combined West is desperate. It is also cowardly, because understands what real head-on military clash with Russia means, even without the use of nuclear weapons. So, the terrorism--a fine Western tradition--will continue against Russia and Russians. As will huffing and puffing from people who cannot find their own ass with their both hands in a brightly lit room. Here is Glenn Diesen demonstrating the "level" of British "expertise": 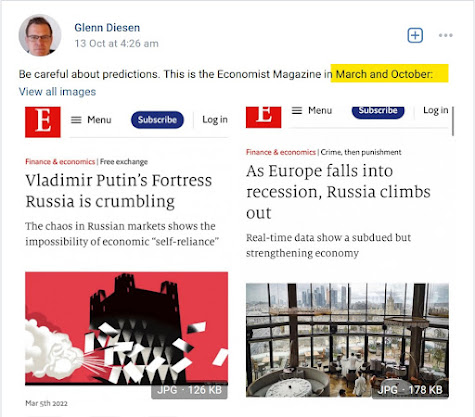 This is the "level". We are dealing with people who are on the maturity level of high school girls and who are absolutely dazed and confused when looking at the world outside, such as this guy:

Russian President Vladimir Putin is correct in his warning that the world is facing its most dangerous decade since World War II, as a "vacuum of leadership" in the United States is creating danger worldwide, retired U.S. Air Force Brigadier Gen. Blaine Holt told Newsmax on Friday. "American weakness and a vacuum of leadership do create danger in the global commons," Holt, a Newsmax contributor, said on "Wake Up America." "But what I'm hopeful about in our American system is that through our election process, we can start to address and sew up some of these weaknesses and start to make this a much more peaceful decade." Putin's comments were made Thursday at the annual Valdai Discussion Club meeting, where he also asserted that "the historical period of undivided dominance of the West in world affairs is coming to an end."

While I applaud General Holt's lucid moment, he, as is normal for most US top brass, misidentifies the cause, because America's "leadership" always ends up with Vietnam or Afghanistan and millions dead civilians. It cannot be otherwise because America's warfare DNA is that of the nation which is completely confused about real war and fails, time after time, to follow Sun Tzu's dictum:

The United States knows neither. It never did. (Geo)political machinations, statements, blackmailing and chest thumping are not a substitute for real knowledge, serious doctrinal and strategic work, world class diplomacy and technological development. But it is former in which the United States (and its vassals) succeeded, while most of the world stuck with the latter. And what's left is just blowing pipelines up and parading dimwits such as Petraeus as America's (and West's) premier strategic minds, for professionals around the world to chuckle. See my last video about 26 year olds running Western world. Larch summarized it very succinctly:

China, the elder, is learning a lesson its 4000 years never taught it--to win, you fight. Russia learned its historical lesson-- there is only one purpose for war--Victory. War is not a substitute for diplomacy. War is to break the will of your enemy, crush his power and force the solution you need or seek. This war came to Russia, and Russia is using it to destroy the world Hegemon. China will benefit greatly, but Russia will have the Victory.

This is your primer for Saturday.

Email ThisBlogThis!Share to TwitterShare to FacebookShare to Pinterest
Labels: Primer for Saturday.