Hm, 30 US Congress"people" want to "negotiate" now. Sure. 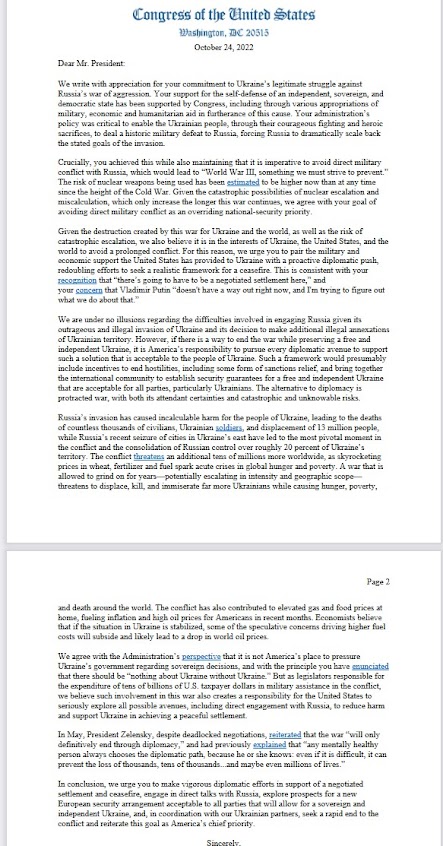 I don't know why those 30 "progressives" needed 2 pages of beaten to death "democracy" cliches and repeating tired BS and tropes about Russia, but at least:

In May, President Zelensky, despite deadlocked negotiations, reiterated that the war “will only definitively end through diplomacy,” and had previously explained that “any mentally healthy person always chooses the diplomatic path, because he or she knows: even if it is difficult, it can prevent the loss of thousands, tens of thousands... and maybe even millions of lives.” In conclusion, we urge you to make vigorous diplomatic efforts in support of a negotiated settlement and ceasefire, engage in direct talks with Russia, explore prospects for a new European security arrangement acceptable to all parties that will allow for a sovereign and independent Ukraine, and, in coordination with our Ukrainian partners, seek a rapid end to the conflict and reiterate this goal as America’s chief priority.

Sure, sure, as Russians have the saying: yes, immediately, once I finish ironing my shoelaces. It is too little, too late. While Russia is always open for negotiations, Russians take national security very seriously, unlike it is always was the case with Washington and its "elites" who have zero experiences with anything real war related. Always had in the last 70 years. Because Russians take their national security seriously and much more professionally than their American counter-parts, the only sovereign and independent Ukraine which will exist will be a much smaller state where all remnants of present political regime in Kiev will be completely removed--some into exile, others behind bars or executed. Mr. Zelensky included, but leave it to MI6 or SAS henchmen to finish off this clown "who knew too much".

As per "European security"...  We are going live to Russian Foreign Ministry and General Staff: