I understand that long forgotten art of simplest, middle school level, linear extrapolation based on two or three, or four data points is only now being resurrected in American top policy (or lack thereof, rather) circles. But it seems General John Heyten tried to deliver the "news" (those are the "news" only for Washington political "elite") yet again at Space Symposium on Tuesday.


COLORADO SPRINGS, Colo. — The head of U.S. Strategic Command would not say whether the United States has seen evidence of Russia’s “invincible” hypersonic missile, but the U.S. military has observed both Russia and China operating hypersonic missiles of varied capabilities, he confirmed Tuesday. “I won’t give you any specifics about the means we use to watch that. I won’t give you any of the technical specifics about the capabilities of those missiles,” Gen. John Hyten told reporters at the Space Symposium. “But I can tell you that we have observed both Russia and China testing hypersonic capabilities.”

The Kinzhal hypersonic cruise missile, which will be able to be equipped with both a nuclear and conventional warhead, can “overcome all existing and, I think, prospective anti-aircraft and anti-missile defense systems,” Putin said then. Whether that missile is in its developmental stages or actually undergoing operational tests, Hyten wouldn’t say. But it was obvious he took Putin’s claims very seriously. “You should believe Vladimir Putin about everything he said he’s working on,” Hyten said. “Now, the operational status of a lot of those capabilities…that’s a different issue. But everything that he’s said, I know that Russia’s working on, and we watch them very closely. We also listen to what they say very closely, and none of what he did and none of what he said surprised me.”

The issue here is extremely, like almost kindergarten level, simple—the US and her so called Russia's "military expertdom", bar some very few (and I mean a very small number: 5-6 at most, if not fewer) real professionals and true experts, is pathetic. It has a "stellar" record of neither predicting nor understanding Soviet/Russian military-technological realities nor operational, strategic or political ramifications of just about anything Russia (or USSR) ever produced in her military technology. It is akin to explaining the aliens from other galaxy who procreate by spawning what is the meaning of unprotected sex.

Soviet Union lead the United States in supersonic cruise missiles for many decades. Kinzhal or no Kinzhal, 3M22 Zircon or no Zircon, an overwhelming lead by USSR in this field became clear already by 1970s. M=2.5 at high altitude capable P-700 Granit became the mainstay of anti-shipping and secondary TLAM capability in Soviet Navy by 1980. West had nothing comparable. By the time P-800 Onyx (Oniks) came around in late 1980s only moron couldn't see where this all was going. The race was always for hyper-sonic speeds to limit reaction time of whatever air-defense systems NATO fleets would deploy and to deny any "traverse", let alone "catch up" intercepts in case of relatively high densities of AD means, such as the case with US Navy's CBGs. 4-6 3M54 missile salvo, especially from underwater, provides very high probabilities of at least the leaker or two, that is missiles which break through AD screen and hit targets, 10-20 missile salvo spells the doom to any group of the ships, including aircraft carrier. Zircon or Kinzhal make any group of surface ships simply defenseless.

So, what's left for Pentagon to do in this case? As Russians themselves admitted, the United States works hard on some kind of hyper-sonic system but it is highly doubtful that it will come on-line, at least in IOC, such as Kinzhal has already, any time soon. As simply sensational performance of Pantsir S1 in Syria recently demonstrated, the fact US media are desperately trying to hide from public, any subsonic target for such systems is simply not a serious target, especially in the case of full integration into Russia's vast and powerful C4ISR complex. Starting from the third hull of Project 22800 Karakurt, all ships of this class will have navalized version of this very Pantsir, which will make those numerous ships not just capable, both anti-shipping and land-attack, missile platforms, but excellent air-defense screens. Pantsir, obviously, had no difficulties dealing with allegedly "Smart" and "stealthy" JASSMs (or naval version—LRASM). For now, the only weapon which is high supersonic on any US carrier is an aircraft carried HAARM missiles. The launch of such a weapon against the most likely background of pr. 22350 Gorshkov-class frigates, acting as a core of Ships Strike Group, armed with Redut AD complex mitigates any launch of HAARMs since requires any HAARM carrier to enter kill-zones and that is just one of the scenarios which doesn't account for impressive ECM-ECCM capabilities.


Will the US at some point of time procure something more powerful and capable than venerable Harpoon or Tomahawk? Stop-gap measure of using SM-6 as "anti-shipping missile" is not being taken very seriously, at least not in Russia:


The US Navy is seeking to adapt the Standard 6 (SM-6) missile for use against ships. If this modification is successful, the range of the SM-6 will be increased from 250 km to 370 km. This is a new anti-ship mode that can shoot down airborne threats, and now the same missile can attack and destroy a ship at long range. The Navy wanted to spend $2.9 billion over the five years FY17-FY22on the modified SM-6 as part of its “distributed lethality” initiative. This new anti-ship mode makes the SM-6 highly lethal due to its speed and agility and nearly overnight doubles the purpose of every such missile used across our fleet of Aegis destroyers. Boeing’s (BA) Harpoon anti-ship missile has a range of about 67 nautical miles, less than 130 km.

It is inevitable that US will get it done at some point of time but with modern Russian anti-shipping missiles hitting already launch ranges of 800+ kilometers, while improving the lethality of their AD systems, it really makes those stop-gap measures look merely as "doing something". This is WITHOUT consideration of Kinzhal and what it brings operationally and strategically. With Kinzhal and eventual deployment of MiG-31BMs which carry it to Syria, one can easily understand gigantic geopolitical ramifications. Perspective Russian destroyers, yes-yes, I know the score with those—long a tedious process of design, re-design and re-design yet again, with all those Design Bureaus showing off their models and exercising in PR, should be armed with either navalized S-400 of latest versions or, if available by then, navalized S-500, the whole concept of war in the ocean (and land) will be completely changed. Well, it already is changed—but who knows, we may indeed, be facing the final coming of long awaited but never materialized in 1990s and 2000s RMA (Revolution in Military Affairs). Who would have thought that it would be Russia, not US, who brought this about. 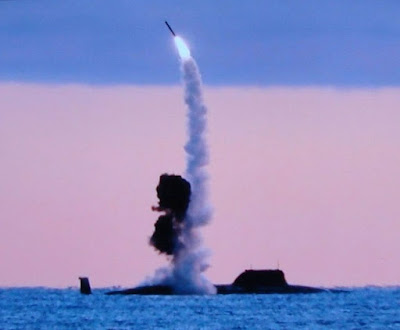 Washington (AFP) - The US Air Force is awarding almost $1 billion to Lockheed Martin to design and develop a hypersonic missile that can be launched from a warplane.
The contract follows repeated warnings from senior defense officials about rapid advances by China and Russia in the field of hypersonic weaponry, where missiles can fly at many times the speed of sound and dodge missile-defense systems.

This, of course, was totally expected and predicted.


Gary Pennett, director of operations at the Missile Defense Agency, recently said enemy hypersonic weapons -- which could be launched from planes, ships or submarines -- would create a "significant" gap in US sensor and missile interceptor capabilities.

In related news for Gary Pennett, the gap "would not" be created, it has already been created. I am not sure, however, about China's real, not claimed, capabilities. They were doing their thing for a while too. Now, as was discussed on this blog not for once--what would US Navy's Carrier Union do, when its very own carrier offsprings, highly experienced carrier aviators, Commanders Joseph A. Gattuzo and Lori J. Tanner brought this issue up like this in 2001:

“In the past, the successful nations were those who best tailored force structures to meet political objectives... Cruise missiles will replace manned aircraft and sink the ships that carry them... Money spent furthering manned aircraft technologies and programs—the CVNX (proposed Nimitz-class carrier replacement) being one of them—is like polishing cannonballs so they will fly a little farther.”

Ah-h, this ever annoying force structure issue.
Posted by smoothiex12 at 10:19 AM