Some seemingly unimportant news, which are, in reality, hugely important. Elites, how one grows elites--real ones: intellectual, knowledgeable, educated, having a scientific and realistic view of the world.  Russian girls' team took first place on 2018 European Girls' Mathematical Olympiad which was held Florence, Italy. The event is not exactly European per se, since American girls Catherine Wu and Wanlin Li (wink, wink) also took part and got their gold medals. Russian team, however got 4 gold medals and the first place (in Russian). One can see rankings, individual and team, on the official site of the Olympiad.

What is encouraging about all that for Russians? The fact that these kids and their magnificent academic accomplishments are increasingly often hitting major news in Russia. 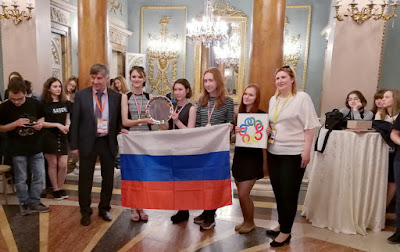 It is not merely the issue, however justified, of patriotism--it is the issue of upbringing the new generation. There is a direct link between highly educated population, especially in STEM, and highly developed nation. And by education I mean something completely different than what it became in US and Europe.
Posted by smoothiex12 at 10:23 AM