Here is the map of the Sea of Azov the way Ukraine, in light of the Crimea's return home, viewed this Russian-Ukrainian internal sea. On 16 July 2015, a group of Ukrainian members of parliament submitted a Draft Law on the Denunciation of the Treaty between Ukraine and the Russian Federation on Cooperation in the Use of the Azov Sea and the Kerch Strait which was not, however, adopted. This is not surprising as Ukraine apparently relies on the Cooperation Agreement for both its claim that the construction of Kerch Strait Bridge is illegal and for its passage rights through Kerch Strait (see Part II of this contribution). In 2016, a number of Ukrainian State agencies requested satellite photos from Ukraine’s State Space Agency, naming part of Sea of Azov Ukraine’s Exclusive Economic Zone (EEZ). Thus, even if a shared bay regime of internal waters exists in the Sea of Azov, it might not be here to stay. 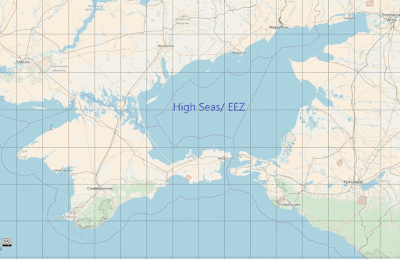 It is not anymore here to stay. Ukraine, in a desperate attempt, to achieve any kind of destabilization with and provoke Russia—a program clearly articulated by American foreign policy "elite" in 2014—detained Russian fishing boat Nord which was operating within international waters in the Sea of Azov and escorted this boat, with crew of 10 to the Ukrainian port of Berdyansk. I am not going to delve into purely legal issues of this whole situation but something has to be clearly understood about serious strategic ramifications of this seemingly insignificant event. I already reviewed some thoughts (and geopolitical advice, no doubt, to powers that be in Washington) by great naval thinker and strategist such as Dr. Stephen Blank who proposed moving (I assume using under-keel wheels) US Navy's assets into this horrendously deep (average depth is 7 meters, that is 21 feet) body of water to scare the shit out of those arrogant Russkies and uphold Freedom of Navigation principles, but the matter is not as comic as it may seem.


1. US, or Deep State, or whatever the title of a cabal which runs Washington today, needs Russia to react forcefully and dramatically in order to push the war between Ukraine and Russia. This cabal wants to capitalize on all those, in their opinion, geostrategic benefits it will gain if Russia responds militarily. This will allow to coral US European lap-dogs, from Germany to ever folie de grandeur infected France, into the needed compliance and then prevent any Russia's energy project from materializing in Europe. Ukraine's violation of the agreed upon status of shared bay regime is as good as any as a provocation.

2. Kiev also needs Russia to react dramatically and militarily but not overly painful for the neo-Nazi regime there, just enough to unleash a propaganda campaign which may "mobilized" Ukraine's brainwashed population in yet another anti-Russian frenzy and thus will remove focus on Ukraine's disastrous economic state. But here is conundrum—US wants an all-out war, Ukraine wants it "limited". The reason for that is:

3. Any major war with Russia for Ukraine means only one thing—fast and catastrophic military defeat and the end of the regime in Kiev, not only the regime of Poroshenko, but liquidation of a "modern" Ukraine in principle, with her partition. Russia doesn't want that (for now) because doesn't want to pay for tens of millions of brainwashed, hostile and freeloading population.  This is not to mention inevitable hysteria of the West with Russia still not 100% being ready to part with it. Catch-22 for Russia it may seem. But not quite.

Russian response will be most likely very typical Russian—Russia will simply enforce the shared bay agreement with one small caveat. She will place into this EEZ Russian naval ships and will, no doubt, establish some air patrol routes there, with Black Sea Fleet's naval aviation making sure that mighty Ukrainian naval forces get the message. In fact Russian Navy, through former C'n'C of the Baltic Fleet Admiral Valuev made a very clear statement that Black Sea Fleet will use weapons to prevent Ukraine from acting as a pirate. What is remarkable here is the fact that this statement was made not by representative of Russian FSB Coast Guard, which does also have means to control Ukraine's outbursts of desperation, but namely by naval people. The hint is very clear—in the end Black Sea Fleet and its aviation need live targets to train its crews and pilots in the use of latest anti-shipping missiles.


Remarkably, this warning is not limited to the Sea of Azov, it helps to put things into prospective for Ukrainian regime which had some ideas about sabotaging Russia's economic interests in the Black Sea proper. But it seems that neither Kiev nor its curators in D.C. understand what it means to control the escalation. Russia can control escalation both in the Black Sea and in the Sea of Azov easily—through a massive force there. In the end, in 2017 Black Sea Fleet's naval aviation had to demonstrate to Ukrainian naval armada what to expect if it gets too close and dangerous to Russian oil rigs as it once tried. It took one SU-30SM to forecast the fate of the mighty Ukrainian Navy.

So, after the incident with Nord will come to conclusion, Ukraine may forget now about any claims on what Russia was gladly ready to implement prior to this pirate act—bay sharing agreement. I guess by now Dr. Blank must be on the line with Washington D.C. demanding a couple of Carrier Battle Groups to go to the Sea of Azov to implement freedom of committing of pirate acts in a desperate attempt to provoke Russia--this is a very wrong strategy. God luck to him, I guess.
Posted by smoothiex12 at 1:52 PM