Trying To Get Meaning...

... into meaningless. My talking head about some basic tactical geometry and what all this PR action with tanks means.

I do not even elaborate on the issue of tactical aviation which will feast on any VSU "counter-offensive" in a matter of a few days, until mop-up cavalry arrives, but it gives an idea on the issue of what I define as 100 APCs (such as Bradley) and 50 tanks such as mix of Leo-2 and Abrams, if they even get to the front-line. Never forget this thing: 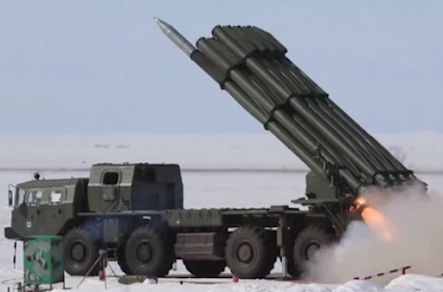 Or things similar to it which can turn in one salvo, and they will not have issues with precise targeting, a few square kilometers into a glass parking lot with everything what was there, super-duper tanks included. I agree with Macgregor that now Washington wants to merely somehow prolong a bloodshed, because it is in a strategic dead-end due to incompetence and ignorance of Pentagon, "intel" community and court economists--all of them are professional failures. Meanwhile, Russian naval infantry is already fighting within Ugledar.
Posted by smoothiex12 at 1:34 PM