Yesterday, Larry demolished what passes in the US for main stream "journalism" by exposing utter BS they publish about Ukraine and SMO, specifically NYT and WaPo.

The U.S. and European officials are relying on HOPE–hope that troop shortages and old, worn out equipment slow the Russian advance. A reporter worth a damn should have asked, “what is the evidence of troop shortages?” Russia is not a totalitarian state. Russia has not shut down opposition media and political parties. Ukraine has done that. So where is the social media showing a rising tide of disgruntled Russians being forced to put on the uniform and then being compelled to show up on the front lines without adequate training? I have not seen it. Have you? Please forward if you got it and please, no video game footage. That does not count. Are you familiar with the refrain, “If if and buts were candy and nuts it would be Christmas everyday.” That seems to be the position of the unnamed U.S. and European officials desperately hoping that Ukraine’s million man offensive against Kherson will succeed. Only several little problems. Ukraine is having a dickens of a time scraping together that mythical million man army. And if they do succeed in rounding up that many sentient fellows, how will they get proper training while Russia continues to hit Ukrainian training bases with missiles, rockets and shells?

I am not going to join Larry in dispelling the myths those 'journalists' try to spread. These people do not go out into the field to look at the facts. They do not consult frontline maps, casualty statistics, structure of forces or economic data. They have no experience in the art of war. They are mere stenographers, highly paid ones, who hang on the lips of 'officials' and write down whatever the 'sources' who invite them want them to tell.

Exactly, and Bernhard lists those "sources" and then concludes:

What is terrifying about such pieces is that 'officials' in Washington and Europe are actually reading such stuff and come to believe in it. They are consuming the myths they themselves produce and then act on them. They thereby ignore history, basic facts and the very real life of the people who become casualties of their wars.

Exactly! Somebody, a few years ago, complained that Louis C.K., the comic, was doing his Russian "routine", laughing at Russia he visited in 1990s. In 2015-16 he still thought that it was the same Russia, he never even bothered to visit Russia in 2016 and he still thought about this grim crime-ridden miserable place he saw in 1990s. This is the problem for the US, including also the problem that overwhelming majority of the US decision-makers are civilians with humanities degrees who never served a day in the uniform and who have huge difficulties with grasping even basic physics and mathematics principles behind modern warfare and as a result they tend to rely on absolutely the same ignoramuses from US media, who are in the business of spreading BS.

Sadly, even professionals, who should know better sometime don't know better. I was bombarded in the comments sections to my videos with questions like: but Prof. Postol says that Russian Early Warning System sucks compared to the American one.(c) After that even Douglas MacGregor repeats that, despite obviously missing the caveat by the same Prof. Postol that he was basing his opinion on late 1990s-early 2000s data. It has been more than 20 years since then. Remember? I had to write a separate post about this horrendous misperception. 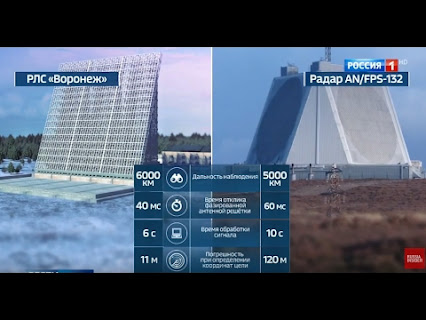 What is horrible here is the fact that many still do not grasp a fundamental difference between Russian and US ABM systems--Russian ABM system at this stage already is capable to mitigate a nuclear attack on Russia by fielding (no, not planning but actually deploying) systems with a full blown intercontinental anti-ballistic capability such as S-500, S-550, A-235 Nudol. These are capabilities the US simply doesn't have. Importantly, one needs a system of BMEWS radar with accuracy characteristics such as Voronezh to not just detect but provide accurate targeting for ABM systems. Look at the comparative characteristics of Russian and US BMEWS radar. Especially their accuracy in targeting. Guess from three times who gets better probabilities for a hard-kill (kinetic, meaning physically slamming into nuclear warhead) of the incoming MIRVs. Right.

And this is just one example out of very many. Now to today's news, which reminds me the news from 1944 and Patton's (yes, yes, this "genius for war") Lorraine Campaign.

Few of the Germans defending Lorraine could be considered first-rate troops. Third Army encountered whole battalions made up of deaf men, others of cooks, and still others consisting entirely of soldiers with stomach ulcers. The G2 also identified a new series of German formations designated volksgrenadier divisions. (See Figure 1.) These hastily constituted divisions numbered only 10,000 men each and possessed only six rifle battalions; in theory they were to be provided with extra artillery and assault guns to compensate for the quantitative and qualitative inferiority of their infantry. Two to 3 panzer divisions faced Third Army in a mobile reserve role, but these units had managed to bring only 5 or 10 tanks apiece out of the retreat across France.

Well, get a load of this per today's briefing by Russia's MOD. As Konashenkov states today:

Translation: “Due to heavy losses, the Zelensky regime is taking measures to replenish the shortfall in the personnel of Ukrainian formations in the combat zone in Donbass. Thus, a decision was made to send mobilized citizens to the front line ahead of schedule, who began training at the training center of the 72nd mechanized brigade in the city of Belaya Tserkov, Kyiv region. Together with them, the wounded who were in hospitals are also sent, without waiting for them to complete the full course of rehabilitation after injuries."

You get the picture. Once one starts drafting 65 year olds, it is everything one needs to know about the state of the affairs on the front. For references see again the Patton's Lorraine Campaign. I will also be talking about what modern ISR complex is, including this Western and fanboys' fetish of UAVs and how modern (I stress again--modern) ISR complex is way more (much-much more) than mere UAVs.

Russia said it launched a military satellite into orbit late Monday. The footage allegedly shows a Soyuz rocket blasting off from the Plesetsk State Test Cosmodrome in the Arkhangelsk region in northern Russia, at 11:25 p.m. The Russian authorities stated that it was carrying a military satellite named "Cosmos-2558."

Yes, yes, can you imagine--those backward Rooskies can launch not just satellites, but launch them when they want and however they want, not to mention the fact that those satellites nowadays are built around Russian-made microelectronics. Here, Russians are getting ready to start launching Sfera-program satellites (Skif series) for a high speed internet for Russia. And, naturally, all Western components were fast replaced by Russian-made ones (in Russian). Louis C.K. I am calling on you, granted that nowadays West made traveling to Russia extremely difficult, just get visa and go visit Russia today and see the difference between 1990s and 2022--you know, will be good for your stand up routine and your OODA loop.