SVR or Service of the External Intelligence or Foreign Intelligence Service of Russia through its representative colonel-general Matveev issued some interesting statements.

Translation: MOSCOW, August 16 - RIA Novosti. Western curators have practically written off the Kyiv regime and are already planning the partition of Ukraine, Foreign Intelligence Service spokesman Colonel-General Vladimir Matveev said at the Moscow Conference on International Security. “Obviously, the West is not concerned about the fate of the Kyiv regime. As can be seen from the information received by the SVR, Western curators have almost written it off and are in full swing developing plans for the division and occupation of at least part of the Ukrainian lands,” he said. However, according to the general, much more is at stake than Ukraine: for Washington and its allies, it is about the fate of the colonial system of world domination.
Among many things Matveev articulated, one stands out especially and this is about US detachment from reality and dogmatic approach to its, now former, colonial possessions, which today are reduced to Europe. That explains the cognitive dissonance in the US which increasingly creates chaos in desperate attempts to preserve already lost global dominance. As Matveev says (in Russian) such an approach is risible but also--dangerous. As he underscored:"The West is getting weaker, it stumbles but still thinks itself as mighty...", which is absolutely true when one looks not only at what the combined West does but also who is at the helm. So, a very interesting set of statements from SVR.
In related news, Army 2022 exhibition has opened in Russia. I cannot access the site of this exhibition--forbidden, of course--but Reuters reacts like this, LOL:

Sure, sure, Russia is about to lose in Ukraine and run out of ammo. But truth is, Putin did state that a lot of Russian weapons will be offered for international sales which means to underscore his earlier, February this year, statement that Russia will unveil soon some weapon systems which are revolutionary. But one photo from allegedly Army 2022 is interesting. 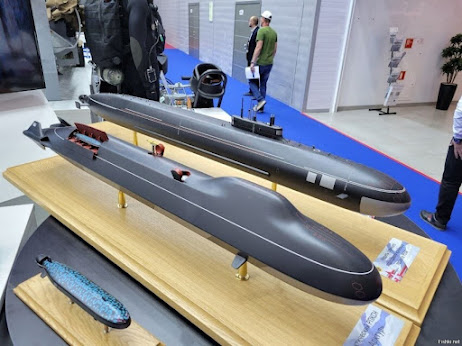 The boat in the rear is pr. 955 A (Borei-A class), but in the front is this much talked about, I guess, Husky-class platform which could be used both for new generation SSGNs and SSBNs. Looks cool.