We start first, though, with the piece of bio of this guy: Jeffrey Sonnenfeld.

Born in Philadelphia on April 1st, 1954 to Jewish parents, Jeffrey Sonnenfeld is the son of Burton Sonnenfeld, a men's clothing retailer, and Rochelle Sonnenfeld, a healthcare and community leader. Sonnenfeld's mother, Rochelle, originally immigrated to the United States from the former Russian Empire in the 1920s. Sonnenfeld earned his AB, MBA, and doctorate at Harvard University. At age 26, he joined the faculty of the Harvard Business School where he taught for 10 years. After a decade at Emory University, Sonnenfeld joined the faculty at Yale, bringing with him the CEO College and launching the Chief Executive Leadership Institute. At Yale, he built a new department of Executive Programs, offering 35 programs a year to roughly 2,000 top leaders with sessions in New Haven, New York City, Beijing, New Delhi, Mumbai, and Shanghai, and opened Yale University's first outpost in Washington, D.C. in 2011. His 2007 book, Firing Back (with Andrew Ward, Harvard Business School Press), studies the paths to resilience for felled CEOs, as well as victims from natural disasters, warfare, and other forms of disruption and adversity. At Yale SOM, Sonnenfeld teaches the popular course "Strategic Leadership Across Sectors", which is consistently the school's most popular and oversubscribed course. Sonnenfeld's previous students from Harvard, Emory, and Yale have gone on to become CEOs and leaders in a wide variety of fields. Sonnenfeld continues to be active in the local community and currently resides in Connecticut with his wife, Clarky, and their two daughters, Sophie and Lauren.

So, basically, the guy is a glorified accountant who teaches a BS course in Yale and who, together with few of his brainwashed students studying BS he preaches, have commissioned a report about catastrophic sanctions on Russia. So, "vigilant" as ever, Euro mediahacks invited this creep to comment on how sanctions "work on Russia".

And pay attention to the shot of Russia's empty shelves. The report concocted by those ignoramuses from Yale is hilarious. Enough to read this piece of "analysis" and data handling, LOL.

Russia’s strategic positioning as a commodities exporter has irrevocably deteriorated, as it now deals from a position of weakness with the loss of its erstwhile main markets, and faces steep challenges executing a “pivot to Asia” with non-fungible exports such as piped gas – as we explain further in Section II of this paper.

And other desperate impotent rage BS which passes in Yale for "scientific research", but among American "scholars" it is normal--to sublimate their childhood complexes and lack of culture, of which Sonnenfeld is exhibit A, into all kinds of wet dreams despite facts showing this research being a hack work, as it is a pretty normal MO of most of Western economists and economic "analysts". So read the whole "paper" which is filled with American "economics" and "extrapolations" by academic frauds--it is hilarious.

So a simple guy, who visits typical Russian stores can easily out the whole Yale University "leadership" and "economics" programs as frauds, which they are.

But, as was stated not for once by me--Western "Russia Studies" field is occupied by academic frauds who pretend to do a real research and are gladly engaged by Western propaganda machine headed by media.

But to demonstrate what fraud, academically and ideologically, this cabal in Yale is, take a look at this: 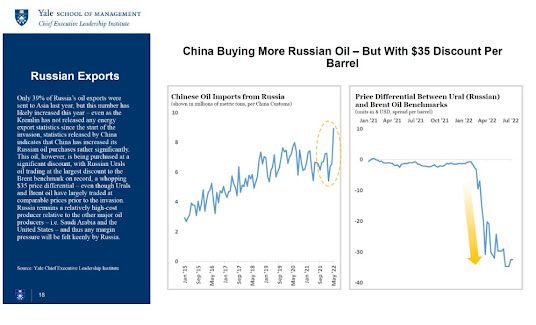 So, while reporting on ONLY Chinese imports of Russian oil, which grows, this fraudster posts a "dramatic" graph of the discounts Russia uses in selling its Urals which she... always did. Moreover, this snake oil peddler forgets to mention:

1. Russia's costs of oil extraction are between $10-15 per barrel, while Russian budget is based on $40-45 price of barrel of Urals. Which, when we consider the base price of Brent as $95, even with $35 discount, still gets us to (I know, Sonnenfeld, obviously has issues with arithmetic) gives us 95-35=60. Yes, Russia still makes a killing selling to China with such a discount.

2. Russia already has in works own benchmark and the rubles for oil is coming, whether fraudsters at Yale want it or not. They also miss this news: 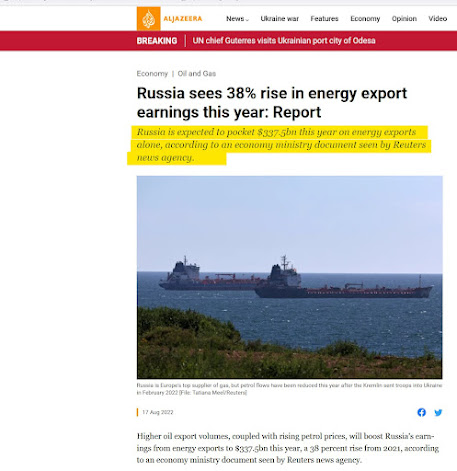 Poor, poor dears. It is so much more difficult to package and sell BS in a form of analysis, nowadays. Except for their own brainwashed and ignorant students, but that is the main function of the modern American education from kindergarten to Ivy League--to mentally and emotionally damage students and turn them into nothing more than biomass and consumers. In fact, Sonnenfeld is so dramatically unaware of the BS he spews, especially when speaking about Russian-Chinese trade relations that he provides a terminal illness of the US as a... proof of... Russia's damage from sanctions. 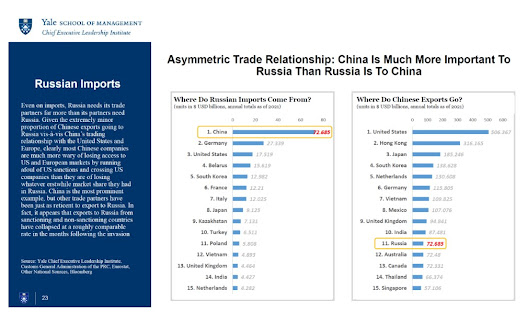 The question is not that Russian-Chinese trade grows, nope, the question is that the US will cease economically in case China stops being US main supplier of a huge variety of products, and the fact that China exports more than half-a-trillion dollars worth of stuff ranging from socks to machinery to the US is, evidently, presented by Sonnenfeld as the advantage, when in reality being a curse both for the US and China. Plus, of course, Sonnenfeld, being a product of fake "economic science" has little understanding of the fact that China cannot meet her national security needs without Russia, especially against unified West, while Russia is not only can do it without China, but effectively is already doing it, and doing it well. But then again, trying to explain all this to American Ivy League "economist" is an exercise in futility.

And so it goes, 118 pages of utter delirium, detached from reality, concocted by people who wouldn't be able to run a paid restroom inside Chevron gas station without bankrupting it, is presented as "analysis". These, my friends, are people who pass in the West for "elites" and these are precisely the people who practically wrecked the United States, let alone Europe, based on their sheer arrogance, ignorance, lack of culture and desperate desire to settle scores, which assumes at least a brief acquaintance with warfare and national security issues, but as they addressed Apollo 13 Flight Control Center:"Houston, we've had a problem here."(c) And it grows bigger. With "academicians" like this bunch from Yale, they will never be fixed and they will lead to final collapse. And don't worry about them feeling shame while lying--honor, academic integrity and class left Western political and educational establishment long time ago. It is gone.