Here is a demonstration of the cultural "level" of Daily Beast and not only. I kid you not, this is not some blog, this is publication in the US.

This is the same publication where such Russia "experts" as Julia Ioffe published their collection of words, which passes in the US for journalism. But primarily most US mainstream media enjoy their visceral hatred of everything Russia and because of that, when combined with sheer ignorance, they produce such headlines. But do not think that it is just this tabloid Daily Beast.

Russians are looking in awe at the complete disintegration of even illusion of the American "democracy" and "due process", not to mention this whole FUBAR with Trump and FBI, that Victoria Nikiforova of Ria published today the piece (in Russian) with the title made of Putin's famous quote about terrorists, which he promised to "мочить в сортире", which literally translates as "to slay in the outhouse", meaning that they will not even feel safe when visiting the outhouse for "business". Which is true, as Salman Raduev, a notable Chechen terrorist, learned the hard way when was taken by Russian special forces while sitting on john. Well, now Nikiforova titles her piece:

The Democrats are slaying Trump in the Outhouse.

In it she describes "evidence" against Trump from photo of his... toilet bowl with some pieces of paper in it. What can I say, it is NYT and the qualifications of most US journos are those of shit and toilet bowl raiders and Nikiforova duly, with a great deal of sarcasm, notes that this journo is from New York and is supposed to be "cultured". LOL. Just try to run the whole thing from Google Translate, it will give you the gist but will, definitely, lose some sarcasm. Still, worth it. Yes, this is the level of Western "journalism" and it is all about shit. Yet, contrary to Daily Beast which describes Russian as being "scared shitless", Douglas MacGregor is pretty clear:

And he is right, Russians are not afraid of the US because, as he notes, in the last few seconds:"Because Russians know us for what we really are." Yep, that's the point I try to get across for many years now. As well as to explain that America's mythology has nothing to do with America's military might, always grossly exaggerated and sometimes simply non-existent, but with the ideas and wealth which America projected around the world and many in USSR did admire it. There is nothing to admire now. The same goes to Europe.

As Estonia's (LOL))) Prime Minister is on record: "Visiting Europe is not a right but a privilege" (in Russian). I don't know what privilege he is talking about, but his little shithole of a country with no economy is altogether is a backwater compared to any large urban center in Russia. But even Western Europe, once being attractive for Russians (Soviets) not so much for its cultural "values", but primarily for its seeming wealth and access to consumer goods not available in USSR, today is nothing more than a declining, per Dostoevsky, museum under the open sky, which is viewed by overwhelming majority of Russians with contempt. As yesterday's report from Ren TV has shown, Russian girls touring Barcelona have been very disappointed with the fact of Spain's mandatory blackouts and instead of seeing Sagrada Familia in all its glory in the night saw nothing but lifeless dark structure.

The myths of European wealth are long gone, Moscow and St. Petersburg make any European city look like a dump plus:

Food producers across Europe are contending with soaring energy prices, with that increase quickly felt in the pockets of consumers grappling with a cost-of-living crisis, Bloomberg reported on Tuesday. According to the report, citing a Bank of England forecast, a third of UK households are set to spend more than 10% of incomes on energy, and now surging grocery costs are driving up food poverty. “It is the domino effect that has happened with us having to take a huge increase on energy,” Ryan Peters, managing director of Brioche Pasquier UK, told the outlet. “We have to try and raise our prices to retailers a little bit, and unfortunately that goes on to consumers,” he said. Kona Haque, head of research for commodities trader ED&F Man, warned: “I think the worst is still to come as energy prices rise. This winter will be a game changer and processing costs will likely go up.”

Yes, "food poverty" is a euphemism for different stages of going hungry. I elaborate extensively on this issue in the US in my last book. And Europe did it to itself. Because of that, they will hate Russia and Russians even more. As per "freedom" which was perceived and desired so much from the confines of the Soviet Union in 1970s and 80s, only mentally challenged fringe Russian pro-Western community buys this BS of EU being a "democracy" and having "freedom". While India walks the talk and ditches US Dollar, while in the same time, India teaches EU how to run real economy:

Russia’s share of the Indian oil market is growing at the expense of Saudi imports, Bloomberg has reported, noting Russian oil has been selling at a sizeable discount to Saudi crude. Russia became the second-biggest oil supplier to India in June, after Iraq, which remained the biggest oil supplier to the subcontinent. India and China became key markets for Russian oil after the Ukraine invasion as Europe began to wind down its purchases. The EU plans to suspend almost all imports of Russian crude and fuels by the end of the year, when an embargo will come into effect. China and India, however, have only been too happy to absorb some of the crude that Europe is shunning, with both Asian giants dependent on imports for their energy consumption. As of July, the two accounted for 55 percent of Russian seaborne oil exports.

But Russians have the advice for Europeans. 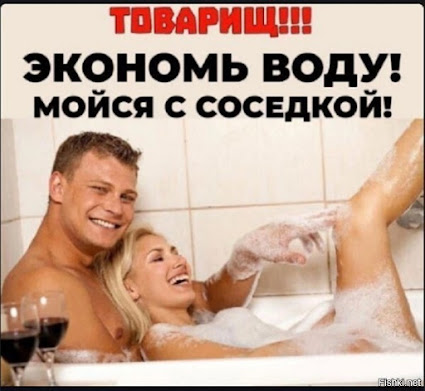 "Comrade, conserve water! Take baths with your female neighbor". Good advice, especially when one begins to get a whiff of a combined West being scared shitless. Disclaimer: the physical appearances of female neighbors may vary and may differ significantly from one shown in the PA Poster.
Posted by smoothiex12 at 12:33 PM