They Begin To Feel The Pinch. Or, Didn't I Tell You So?

Russia is tightening the noose on Ukrainian troops in the country's east. A fierce ground and artillery assault has seen Moscow's forces advance, and they now appear close to encircling the last two hold-out cities in Luhansk province — which together with neighboring Donetsk forms the Donbas region that has become the key focus of the Kremlin’s war. With Ukrainian officials voicing concern their troops are now outmanned and outgunned, this Russian push could prove a decisive moment in the conflict.

But, but, NBC, haven't you gotten the memo that Russia is losing badly and is about to run out of ammo? Just ask Generals Petraeus or Keane, they'll tell ya.  They know what they are talking about, they won exactly... zero in their careers. Or ask CNN or MSNBC, they will tell you that Putin faces the coup (having almost 80% of public support), has cancer, Shoigu just had a heart attack and Gerasimov is barely alive from his wounds. Hey, you must uphold the reputation of the American MSM as a sewer and primitive propaganda tabloids.

Of course this also contradicts the narrative of the last 3 months:

Russian troops have taken over the town of Liman in the northern Donetsk region, the government in Kiev admitted on Thursday evening. Ukrainian forces have reportedly withdrawn west-southwest towards Slavyansk. “We have lost the town of Liman,” Alexey Arestovich, adviser to Ukrainian President Volodymyr Zelensky, said in a livestream on Thursday. Though Arestovich cited “unconfirmed reports,” Russian military correspondent Alexander Kots posted a video of Russian troops in the city shortly thereafter, captioned “Liman is ours.” Ukrainian troops “fled” west and southwest, Kots added, while covering their retreat with artillery fire.

Now the new narrative is needed, since by different estimates another 15,000+ VSU are trapped at Severodonetsk-Lisichansk cauldron. So, that means that VSU is about to "win" yet another "victory". Just to remind you how cauldrons are created. And believe me, Russians are really good at creating them. Here is harking back to the closing of Wehrmacht in many of them. Operation Bagration: count yourself how many major cauldrons have been created, the smaller ones are not even counted: 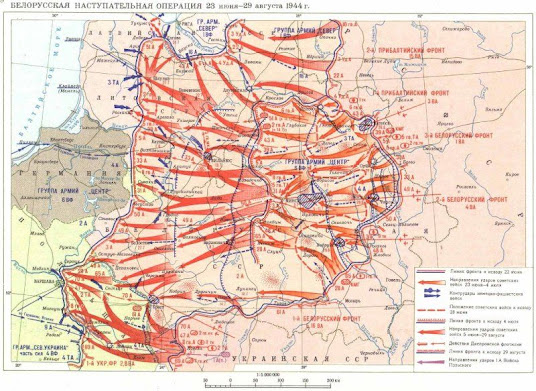 So, Russian Army knows how to close and boil those cauldrons. in fact, has an unparalleled experience of doing this, including by learning from own disasters in cauldrons set up by Wehrmacht during its halcyon Blitzkrieg days of 1941-42.

The dynamics of VSU collapse is telling and even Kissinger's suggestions to 404 to trade territory for existence are too little, too late. Russia is in no hurry, she can clearly see the economic implosion of the West, and this doesn't add optimism in regards to prices at the pump: 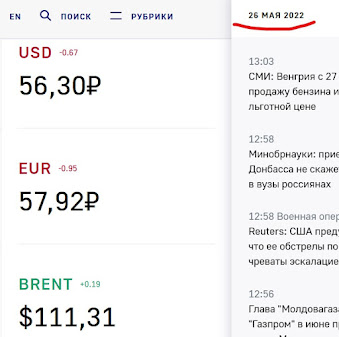 Tells everything you need to know for today. As my friend Byron King stated, when speaking to the assembly of investors in Vancouver a week or so ago. Describing the focus of his talk he notes:

the focus was on economics and where sanctions will take the world economy. Along those lines, we all may be far from the front lines and at no risk of getting bombed or shelled. But those sanctions are exploding across the world. They’re blowing back, in fact, and doing grave damage right down the street from wherever you live. It’s as near as the grocery store, gas station or even the electric power meter on the side of your house.

These are immediate effects of failed sanction Byron describes:

Now consider other aspects of global trade that have been adversely affected by sanctions:

Sadly, these are us, simple folks who do our considering, people in D.C. do not. And as it begins to emerge more and more--they can't and many are not rational players at all.  Meanwhile, suffering from cancer, gout, acid indigestion and other illnesses, but looking very healthy and energetic, Vladimir Putin, in his conversation today with Italy's Prime-Minister Mario Draghi, stated (in Russian) that, sure, Russia is ready to help with food and fertilizer crisis, once the politically-motivated sanctions will be removed (wink, wink). It is worth noting that it was Draghi who asked to speak to Putin, not the other way around. Per gas? Sure, Russia always fulfills her contractual obligations. But I am sure if it comes to it, EU an American "partners" will help Italy, right? Nah, I am screwing with you.