People love symbols. It is only natural and when a complete disassembly of Nazi Azov org happened in Mariupol a few days ago, very many people started to give to the fact of Azov's big honcho--in reality he is one of a few ones--and Western media "darling" Prokopenko and whatever his deputy call sign is, Kalina or what have you, too much significance. Some said that he surrendered, then it was refuted, then "confirmed" again, and so it was this back-and-forth for a couple of days but in reality, tactical, operational and strategic reality of today's Mariupol, it made very little difference, because it was mostly a symbolic thing. Those 2,000+ of Nazis who already surrendered by that time were in themselves a huge value for Russia and LDNR in terms of intel.

Well, now the surrender of this Azov's commander is fully confirmed and he was taken away by Russians in the armored vehicle since there were very many people of Mariupol who wanted to lynch him for his and his subordinates' crimes (in Russian). Yet, there is no denial of the powerful symbolism of all this, since in roughly two months a much numerically inferior Russian force not only took a major urban center and its vicinity but in doing so completely annihilated what was considered the best fighting force of VSU and Ukie Nazis and now many of those Russian forces, after some regrouping will be aiding at the Severodonetsk-Lisichansk axis where another roughly 15,000 of VSU and Nazis force is being annihilated as I type this. Symbolic? Absolutely! Now Kiev desperately needs to construct another "peremoga" (victory) in media to keep the attention of its sponsors from D.C. and Brussels firmly on 404 and own population completely brainwashed.

Well, there is surely a lot of Western "attention" on 404--primarily for its grain which is being "removed" from 404 by anything available. If the rest of Ukraine will go hungry neither Brussels nor D.C. really care, those Slavs are subhumans, after all, at the more they die, the better. Meanwhile Western "economists" continue to wonder--what is going on? 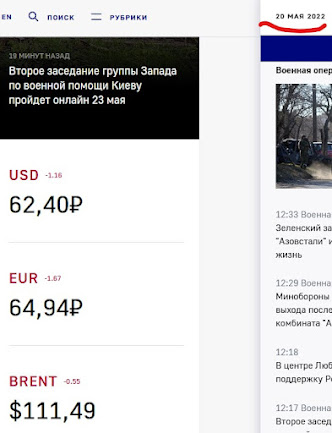 In accordance to their "science" Russian economy should be "in tatters" but, evidently, it is exactly the other way around and then this "bummer".

Right. Truth is, the alternative world governing system is being created as I type this, with Russia discussing the exit from most Western "orgs" ranging from WTO to WHO. So much so the process is advanced, that some in Russia even begin to assess (in Russian) the validity of BRICS growing into the alternative G-20. But how about renaming G-7 (you know Great-7) to M-7 (Mediocre-7)? It will be very symbolic but also reflecting perfectly the status of what is commonly known today as the combined West. And that brings us to the issue of power projection which the person (Gevorg Mirzoyan), who authored the piece on BRICS, fails to understand--larger Eurasia, the Heartland if to follow classic (and redundant) geopolitics is a unique landmass, which requires absolutely different approaches to "power projection" than what became known from the American way of projecting power. But that is a separate huge issue which requires a professional treatment.

In purely Sitrepish news. Read the excellent note from Larry Johnson on Desna:

Desna Is Just One Disaster for the Ukrainian Military

Plus  Andrei Raevsky gives a good report on Shoigu's statements. So, here is you primer for Friday.