And even this way is still misleading (e.g. Russian energy bill is... 40 times smaller than European one, in Russian), but at least it is a good start for British tabloids to look at the prices' dynamics.  The Sun laments:

WELCOME to sanctions-hit Russia – where heating bills and fuel prices are a fraction of those in Britain. Food costs are also coming down every month and Vladimir Putin’s people are partying as if there is no war.

Then it proceeds to tabulate things which DO matter in real life. 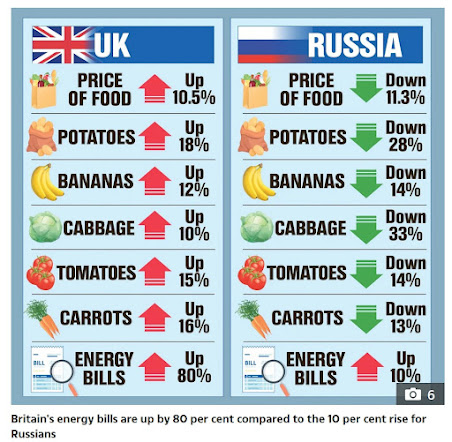 The reason I have a smug smile on my face is not because I am smug, by nature I am not, but because I like to be proven right once in a while, because in 200 years, if we survive as humanity, very few people will remember the capitalization of Apple or Facebook if they will even exist then, which I doubt, but historians will be very interested in the price of things which matter. Right, energy, cabbage, potatoes and things of this nature, which our civilized and moderately comfortable lives depend on.

Explaining how Russia had managed to buck the trend, strategy specialist Professor Michael Clarke said: “Their government has the cash right now to subsidise food, and as long as they have oil and energy money, they can keep subsiding. “But what the price of energy will be next year is anybody’s guess. It will get a lot harder for them from next year onwards. “At some point I believe their economy will be in very bad shape, either next year or the year after. “But that depends on the price of energy. “The rouble is doing OK because they are making people only buy and sell using the ruble. That will keep the currency strong for a while.”

Generally speaking, and I am on record here, economics departments in the West, together with a bulk of "liberal arts" departments should simply be disbanded while "professors" in economics, sociology, literary criticism and Queer studies should be stripped off their "degrees" and forbidden to "teach" because they peddle a pseudo-academic BS as a legitimate knowledge. Professor Michael Clarke of the University of Exeter  certainly qualifies for academic defenestration, because he, same as his former employer of RUSI, have no clue what they are talking about. This also applies to British military and intel establishment populated with barely educated hacks, as the events of the last several days with VSU "counter-offensive" and NPP attacks have demonstrated so dramatically. Not only they have no idea what modern war is, they cannot run their own country. Studying Russia would have helped but there are no real scholars on Russia in the combined West.

Speaking of which. Peskov stated today that Russia is "ready to talk to Ukraine... on how Ukraine will fulfill Russia's conditions" (in Russian). This is a euphemism for capitulation, of course. And here is one piece of news of note. You should remember that starting from 2014 I am constantly on record that Ukraine has coalesced into the political nation distinct from Russia. These ARE different people. Putin and others from Russia political top were forced by political decorum and public mood to constantly stress that Ukrainians and Russians are "brotherly nations". Of course, it was only partially true and it takes a couple of generations to completely reprogram any kind of limitrophes into believing all kinds of pseudo-historic BS and this is what happened in Ukraine in the last 30 years. Here is proof. As whatever is left of the VSU 35th Brigade of Naval Infantry cries from the front lines:

Translation: “This is not a war, we are simply being exterminated ... How many more tears will our mothers and wives shed? How many children will be left without fathers? How many more mass graves will there be? Brothers, who did not survive this night, you are forever in our hearts... Where are the mobilized? Everyone to the front! All--to the defense of Ukraine! We have battalions left only on paper, while they (in the rear) are partying!” - the defeated marines report in their Telegram channel.

You see, they still want to defend the avatar of a country, known in Russia as country 404 and its Nazi puppet regime in Kiev. So, I want to stress again--war, and SMO is war, albeit a very peculiar one, is never about re-educating local civilians only. No, war, quoting our good ol' friend Carl von Clausewitz, is about "compelling the enemy to do our will." In order to do so, you destroy its armies and that means physical annihilation of enemy's war material economy and, yes, extermination of those military personnel who still want to fight.

You see how it works? Peskov articulates Russia's will (conditions), Russian Armed Forces do this proverbial clausewitzian "compelling". Until Kiev is compelled to do Russia's will. But, of course, and that IS the main issue--many Ukrainians are so brainwashed and so banderized that they still do not understand that and continue to go to the slaughterhouse on the East to be denazified and demilitarized in the most radical manner--physical extermination. Arestovich admitted today that he lies about the real state of the affairs on the front (in Russian), but, unlike MI6 and (Royal) General Staff, we knew it all along. And the cycle of disposal of the most stubborn believers in Ukraine's "history", concocted and financed by the US State Department and CIA (and London), continues until mobilization potential of Ukraine is completely annihilated to a dismay of military "planners" in Pentagon and London. I know, I know--real military history, Theory of Operations, math, physics are hard, much harder than learning "proper" gender pronouns.

Which, in conclusion, brings us to this: the starboard shaft is a goner on HMS Prince of Wales and I wonder what this major "failure" was precipitated by? Was this purely navigational--a euphemism for striking the ground--or was this independent failure? We should know soon. In any case, it is an embarrassment for the Royal Navy and its hapless program of aircraft carriers. I will, for now, abstain from commenting too much on this issue, precisely because I am not a rocketry specialist:

NASA’s next-generation Space Launch System likely won’t fly in September. After a fuel leak forced the agency to scrub its second attempt to launch Artemis 1, there had been some hope the mission could get underway before its current launch window ended on September 6th. That won’t be the case. "We will not be launching in this launch period," Jim Free, NASA's associate administrator for exploration systems development, told a room full of journalists after the events of Saturday morning. “This was not a manageable leak,” Artemis Mission Manager Michael Sarafin added, referring to the “quick disconnect” fitting that gave NASA so much trouble yesterday. Ground crew at Kennedy Space Center attempted to troubleshoot the issue three times before recommending a “no go” for Saturday’s launch. According to Sarafin, the leak began after one of the fuel lines to Artemis 1’s core booster went through a brief and “inadvertent” overpressurization. An “errant” manual command from Mission Control triggered the incident. As of Saturday, Sarafin said it was too early to know if that was the cause of the fuel leak, but there was enough flammable hydrogen gas near the rocket that it would not have been safe to launch. "We want to be deliberate and careful about drawing conclusions here, because correlation does not equal causation," he added.

But as many in Russian space program circles started to talk after yet another delay, one of those being rocket systems engineer Dmitry Konanykhin (in Russian), Artemis-1 is nothing more than same ol' slightly modified Shuttle Launch System which, naturally, inherited most problems this system had to start with. Sticking some brand new orbital module on the top of essentially the same tank which was responsible for destroying both Challenger and Columbia and killing their crews is not a way to do it. Dmitry is very gracious towards NASA engineers because he constantly stresses that as engineers they are good, but they are constantly under pressure to "deliver" including by bypassing safety procedures. We heard this story before, didn't we? We know how it all ends. And that is your primer for Sunday.