Clarity In Small Dozes. Or Why I Do Not "Do" Sitreps.

1. I already quoted Apti Alaudinov when two days ago he stated:

What is happening today was planned. This is a tactical ploy that helped us to pull all their forces and means to the territory where it is convenient for us to fight with them.

But, of course, what does he know, right? He is just a commander of Akhmat regiment which is more of a brigade size formation which fights in 404. Some say they have 1,200 people in SMO (which IS a regiment size force), others say--more than that. So, experienced and courageous commander of this formation calls it as it is. But no, we get all kinds of arm-chair "strategists" who know it better. Well...

2. Today, though, much maligned by me, and not me only, Mr. Sivkov, who is now a spokesperson for Academy of Artillery and Rocket Science, recalls that he, after all, was an officer of the General Staff and states:

Translation: “Our military knew that an offensive was being prepared, so now the troops are regrouping to destroy the grouping of the Armed Forces of Ukraine (AFU), which has come to the Balakleya and Izyum regions. It must be borne in mind that there are no fortified areas there, so the task of destroying the most combat-ready Ukrainian units will be solved quite successfully. This will take a few more days,” said Doctor of Military Sciences Konstantin Sivkov. The expert emphasized that over the past three days, as it became known from the report of the Ministry of Defense, more than 2 thousand Ukrainian and foreign fighters, as well as over a hundred units of armored vehicles and artillery, were destroyed. “The Armed Forces of Ukraine are suffering large daily losses. Now the main task is to defeat the advancing grouping of the Armed Forces of Ukraine, deprive it of its potential, knock out equipment that is not located in cities and fortified areas, but in open spaces. The Armed Forces of Ukraine should not have the strength and means to conduct effective defense,” the interlocutor explained.

But, but... how could this be, when Russian General Staff didn't call Yuri Podolyaka or Rybar, or Readovka, or South Front and didn't ask for their "expert" opinion? Because as we know, the real war is fought in media sphere and people who wouldn't be able to distinguish shit from shinola operationally rely on their own and IPSO echo-chamber.

Here is one such demonstration--operational maps. I did a review of this issue a few days and touched upon this seemingly simple thing: that you cannot trust maps by all kinds of fanboys, like Rybar, because those are NOT real military maps and the first tell-tell sign of it the lack of proper legend and scale. Here is one such example of such a map: 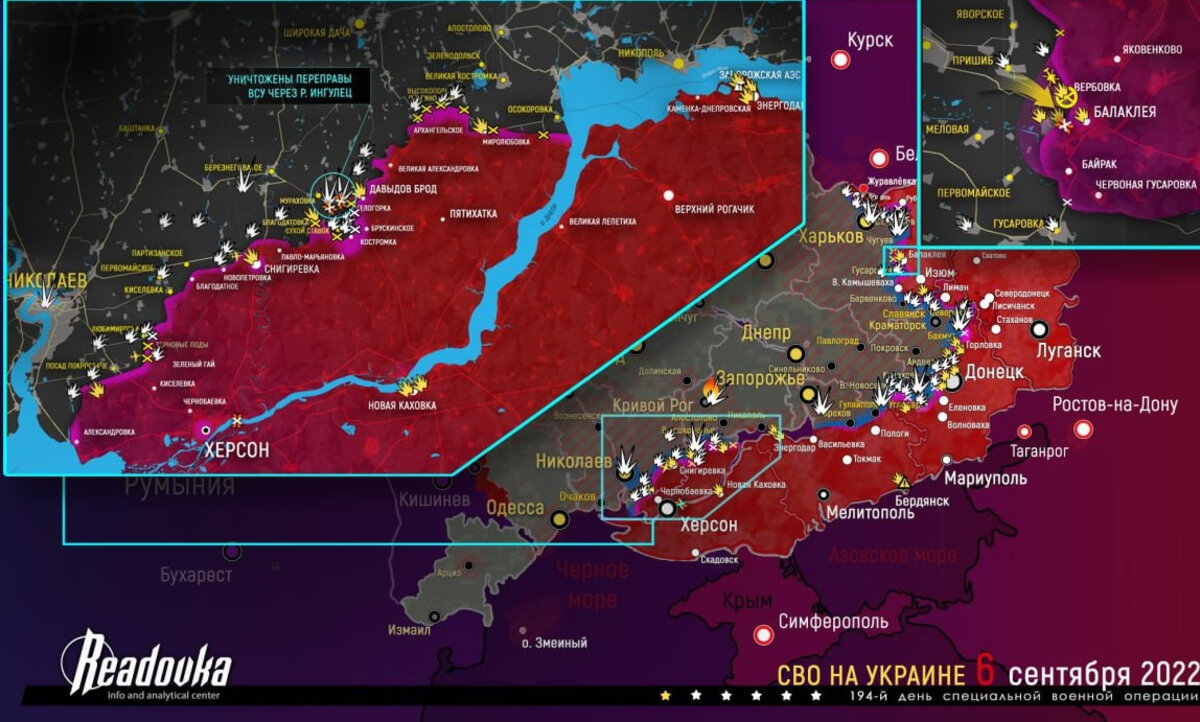 As you can see yourself, in a good tradition of fanboys the attack on Balakleya is presented with a nice yellow arrow. But let me show you how, let's say, the staff of a brigade or a division size formation looks at the battle. Here is 1942 and its operational map by Wehrmacht. It is Voronezh. 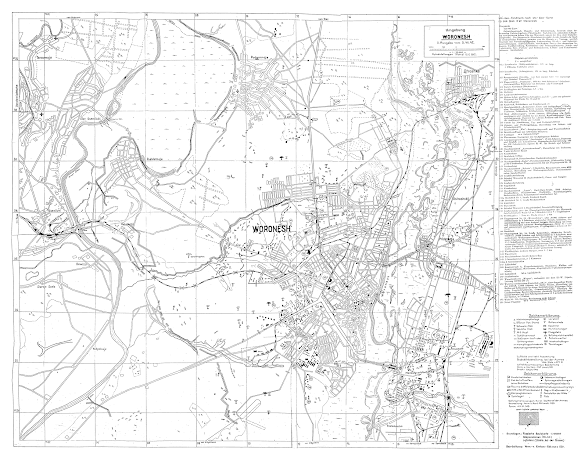 By now you begin to notice the difference, right? Right, this one is for professionals and it is also the one which once first symbols of units and formations, both friendly and enemy's, begin to be drawn upon, and you guessed it, it becomes classified. 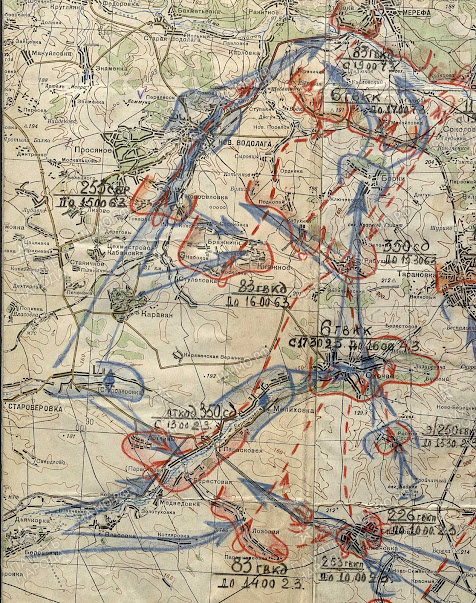 As you can see yourself, you get here all necessary geographic and tactical details on it. This was 80+ years ago. Fast forward to 2022 and SMO, not only Russian Army uses paper maps but most of it in the minute tactical detail is reflected on the displays of Combat Management Systems of battalion and higher level, up to to VNTSUO in Moscow. Needless to say, ALL of it, without exception, including REAL positions of Russian units and formations is highly classified and is not known to ALL "experts", me included, who pretend that they know. They don't. Same as they don't know real operational plans, they do not know the real troops movements and all poor and overwhelmed consumers of such "expertise" get is a feculant stream of "interpretations" of media information by amateurs who present their operational "skills" (99% of them have no idea what operational planning is) by producing the SO CALLED "operational maps" which are nothing more than a complete and misleading BS concocted based on the media "reports" most of which are nothing more than crude propaganda and PR.

I am not going to disassemble here all those idiotic assumptions by all these "experts", many of who are nothing more than unsuspecting conduits for Ukie propaganda, but I have to give them the credit for their compete belief in their own operational and strategic talent and foresight after most of them never served a day in uniform and never commanded at least a platoon, let alone company or battalion size formations, not to speak of serving in the staffs of battalion, regiment, brigade not to speak of corps or the army. But here we are.

Reality, however, from the data which is pouring in for the last couple of days from Kharkov is such that already more than 2,000 of VSU personnel are KIAs, so you can now multiply it by at least three and it will give you around 6,000 sanitary losses--in general, the rate of losses is even steeper than that in Kherson a week ago, when VSU has written off between 15 to 20,000 of personnel. Kharkov is shaping to be a wowser. A bloody one. But then again, what do those losers in General Staff know when we have internet "analysts" with zero military experience telling us that rate of losses doesn't matter and it absolutely doesn't indicate like... nothing. Certainly not what Russian professional military people say for the last 72 hours--that a massacre of VSU at Kherson finally pressed them to roll out their main forces at Kharkov onto the plains and small forests of the countryside where already today a number of them have been "enclosed" in what is called "fire sacks" and are being annihilated.

I can sit here and write about this shit for hours, but, frankly, I already confirmed to myself a number of assertions I made in the last few months and I am happy with that, since it makes my job easier. I just want to reiterate--I am not in the PR business and sometimes get a bit tired debunking obvious BS, because it takes time to provide proper framework and context for people to stop panicking, when looking at "operational maps" from Toys"R"Us and listening to incessant propaganda in media. But what do I know, really? This is your primer for the weekend.