...which I believe it is, it merely confirms what I increasingly begin to state openly--combined arms operations incompetence:

American officials helped prepare the Ukrainian military for its counteroffensive against Russian forces in the south of the country, CNN claimed on Thursday, citing anonymous sources. In its article, the US outlet alleged that this assistance included joint “war-gaming” analytical exercises designed to help the Ukrainians get a clear picture of how much personnel and hardware they would need in different scenarios. US officials, meanwhile, reportedly were able to better understand what kind of equipment, munitions or intelligence Washington could offer to Kiev. According to the report, which cites multiple US and Western officials and also Ukrainian sources, Washington had suggested that Kiev should keep its counteroffensive focused solely on the Kherson region in the south of the country as opposed to trying to strike on multiple fronts, which had supposedly been the Ukrainians’ initial plan.

I don't know who "calculated" this ever important and defining thing--a required force (наряд сил)--for this "counter-offensive", but whoever it was, or were, they have huge issues with operational planning and with math, in terms of stating conception, objectives (task) and criteria of effectiveness by which to judge the outcome, which, now we all know. Evidently, as it follows from CNN report, the unnamed (of course) US "sources" still think that:

Among the factors that have allegedly tipped the scale more in Ukraine’s favor recently, the anonymous officials named the delivery of sophisticated Western weaponry, including the US-made High Mobility Artillery Rocket Systems (HIMARS), as well as supposed hostility toward Russian troops among large swaths of the population in Russia-controlled regions of the country. The latter, according to CNN, has been translating into guerilla-style attacks, assassinations and sabotage efforts behind Russian lines.

You cannot fix stupid and amateur, and that is how US (and Western, in general) "aid" to Kiev regime increasingly looks like. But I have been at it for such a long time that there is no need to dwell on this yet again. The conclusion is simple and self-evident--those who "plan" these "operations" for VSU are the same people who ended up having lied and, finally, had their ass handed to them by a ragtag Taliban in Afghanistan and elsewhere. You cannot expect a serious combined arms operations of scale and scope of SMO ability from the military which primarily fought COIN throughout its modern existence. Granted, that North Vietnamese were more than just very skillful guerrillas, those guys also knew how to fight a good fight with serious weapons.

I am sure that this whole FUBAR with this "counter-offensive" which ended in a disaster, and pathetic attempts to sabotage IAEA visit to Zaprorozhie by trying to insert there two saboteur groups, which now have been annihilated, bear all hallmarks of the American "combined arms" planning which is primarily based around PR for the domestic consumption provided by pliable US media and have very little practical output in reality. In the end, even WaPo had enough with this "planning".  Now add here a procurement failure by Pentagon ranging from losing its industrial base to a perverted practices of R&D ranging from disasters with LCS, F-35 to a dismal performance of the US-made battlefield weapons, and one begins to get the impression about what constantly goes wrong. This also explains a desperation from seeing West's best proxy ever being annihilated in industrial quantities by a fraction of Russian Armed Forces.

For the environment of America's top political echelon over-saturated with political "scientists", climate "experts" and lawyers it is impossible to explain, to get across the realities of real warfare and views of the nation whose military history simply dwarfs whatever the United States can present as a counter or alternative experience. This is not the reality "the finest fighting force in history" can easily accept, nor, possibly, judging by the spiraling out of control demoralization and declining quality of the force, even comprehend. 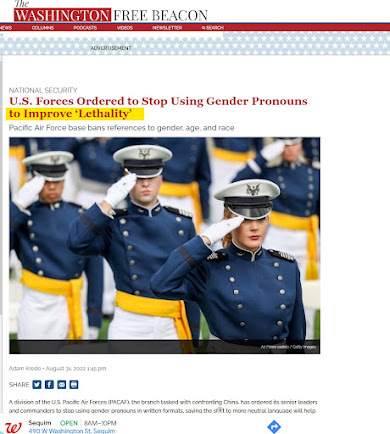 So, I guess classic courses on mathematics, physics, tactics, operations theory and real military history can wait, because nothing "improves lethality" more than proper gender identification and controlling own microaggressions.

In related news from the real world:

Amid the extreme heat that began on Wednesday and is expected to last until early next week, Californian electricity consumers have been urged not to charge their electric vehicles during peak demand hours to help ease the strain on the state’s electricity grid. Temperatures in California and the West started rising to above 110 degrees F on Wednesday, with the heatwave expected to intensify through the holiday weekend and extend into early next week, the American Public Power Association, which represents public utilities, said.Californians are thus expected to be asked via Flex alerts for voluntary energy conservation during the long weekend, the association added.

While Russia flatly responded to Washington:

Russia will embargo countries that support the Washington-proposed price cap on its oil, Deputy Prime Minister Alexander Novak said on Thursday. “In my opinion, this is a complete absurdity… To those companies or countries that will impose restrictions, we will not supply our oil and oil products, because we are not going to work under non-market conditions,” he told reporters, commenting on a plan to limit prices on Russian oil currently being discussed by the Group of Seven (G7) countries.

This is the only language combined West understands, this and a credible threat of force. This is why Russia speaks now in broadsides and we ain't seen nothing yet(c).