This, in chess, is called "the end game". Primarily in chess, in other sports and war they use this term too.

The Islamic Republic of Iran has officially submitted its application to join the group of five emerging economies made up of Brazil, Russia, India, China, and South Africa, the foreign ministry in Tehran announced on Monday. The move comes after the Iranian president addressed the BRICS summit last week. While BRICS is not a treaty bloc, it has a “very creative mechanism with broad aspects,” Iranian Foreign Ministry spokesman Saeed Khatibzadeh said on Monday, according to the Tasnim news agency. He added that Tehran has already had “a series of consultations” with BRICS about the application. Iran’s membership would “add value” for everyone involved, said Khatibzadeh, noting that BRICS members account for up to 30% of the world’s GDP and 40% of the global population.

The isolation of the West continues, hence desperate (and stupid, I may add) attempts to "blockade"  Kaliningrad, which will cost Lithuania her economy and no, Russia will not "follow" the US plan to start a war in Europe to allow the US repeat its saving from catastrophe on the eve of the WW II, which DID save the US. Washington's primitive historic and geopolitical thinking is so transparent that Russia had very little problem anticipating West's behavior. Here is one example out of many. 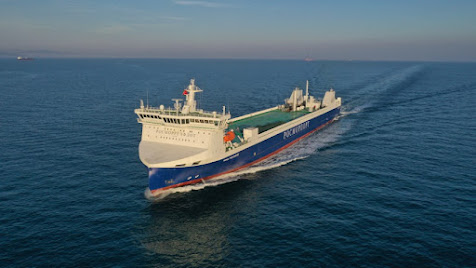 Here is Marshal Rokossovsky ferry. She is a very respectable vessel of 12,000 tons dead weight and she is already servicing the route Ust-Luga--Kaliningrad. Her sister-ship Marshal Chernyahovsky is undergoing sea trials as I type this. Both ferries are designed in St. Petersburg but were constructed at Turkish shipyard Kuzey Star, because Russian shipyards are simply too busy. More vessels of similar class are getting ready to join this route which is already serviced (IIRC--please check yourself) by other 9 vessels.

Will NATO fleets dare to interdict this SLOC? Do not put it past desperate Washington, but then again, they will have to consider Russia's Baltic Fleet and those pesky Kinzhals, Zircons and Onixes with Kalibers, which can sink any combination of NATO navies not only within Baltic Sea but in their respective bases. The argument that this way of supplying Kaliningrad is more expensive than by rail is absolutely invalid. Yes, it is more expensive--but Russia will subsidize and she is awash in cash, in fact many in Russia do not want such a strong Ruble too--but it is more expensive for the peace time, it is not a peace time and this mode of supplying the Kaliningrad exclave works just fine.

And, of course, Argentina applying to BRICS and Bolsonaro being on the phone with Putin constantly gives a hint that Russia doesn't view American "sphere of interest" as untouchable. It is the end game for the United States and its lapdogs from EU. So much so that this proverbial fantastical thinking begins to dominate everything in the West.

The idea of putting a price cap on Russian oil exports in order to keep the oil flowing but reduce the Kremlin's revenues from it might sound rather exotic at first glance—but the idea has been around for a few weeks now. It did just get a major push at the G7 meeting that began last weekend, but the challenges to its implementation are quite substantial. An oil price cap for Russian crude was first floated during talks between U.S. Treasury Secretary Janet Yellen and EU officials on finding a solution for the inflation problem while limiting Russian oil revenues. It quickly became clear that limiting Russian oil exports was not the best idea. The United States, the UK, and, more recently, the EU, have all imposed bans on the imports of Russian oil and oil products, but China and India have stepped up their purchases as Russian crude trades at a sharp discount to the international benchmark. The EU, meanwhile, is buying up Russian fuels ahead of the embargo that will come into effect at the end of the year.

You know what I am doing with these so called "policies"? Right, I declare myself a Superman and then call on Sergei Victorovich Lavrov to give a short summary of the situation with Western "elites". 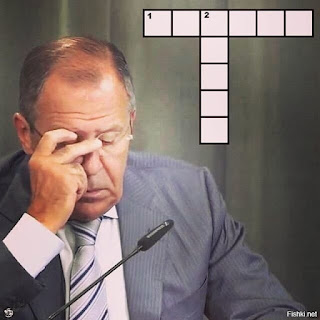 For those who are new to my blog, this is Lavrov at press-conference with Saudi foreign minister a few years back, where he reacts to this minister's statement by whispering--Дебилы, блядь--Imbeciles, fuck. Applies fully to the West. In fact, even more so.
Posted by smoothiex12 at 1:14 PM