... that even the Sky News cannot hide this anymore. 80% losses of VSU formations, well, no Western establishment media outlet is still ready to talk in full about the truth. But Larry gives them (and neocons) a hint:

If you can imagine losing 80% of the 82nd Airborne or 80% of Delta Force, then you can understand the horrible significance of these losses for Ukraine’s ability to field a competent fighting force. Reinforcing depleted units with untrained men is not a solution. Plugging untrained war bodies into formerly elite units does not translate into a force capable of fighting effectively. The art of unit war includes knowing how to maneuver under fire, how to set ambushes, how to establish fields of fires, how to communicate with headquarters and how to clean and maintain weapons in the midst of combat. Ukrainian men press ganged into the Ukrainian Army during the past 10 weeks cannot be trained in such a short period of time to master these skills.

Some die hard neo-cons continue to manifest their ignorance of military affairs by pointing to Russia’s slow progress in taking Severodonetsk as evidence of Russia’s incompetent, weak army. What they fail to understand is that Russia was trying to avoid killing the civilians still inside Severodonetsk, who were being used as human shields by the Ukrainians. Putin and the Russian commanders are placing a higher value on saving civilians rather than unleashing their full military might in order to show the world what they can really do. This is a remarkably mature military strategy.

And here is the issue. While waiting today for urgent root canal appointment (it turned out to be root canal, not extraction as I initially wanted) I hung around Barnes & Noble and while trying to sip on my medium-rare (I mean, not hot) latte I went for the Air Forces magazine. 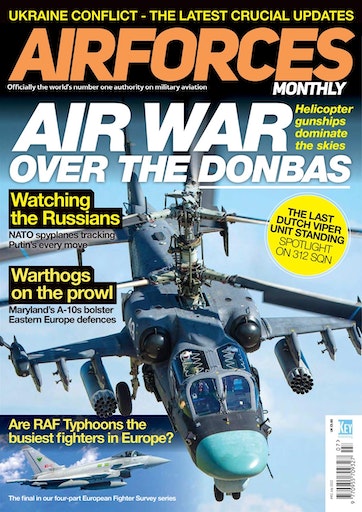 It was May issue. Good God, people. Never in my life did I come across allegedly "professional" or, as they love to claim "officially number one authority in the world on aviation", publication filled with so much pure BS (how about their claim of the failure of RuAF EW?) and unsubstantiated claims, at least they admitted that "the ghost of Kiev" was an 'urban legend", that one can immediately conclude that those "professionals" are nothing more than amateurs who never encountered real air war and REAL SEAD operations against capable air defense. In other words, all they were writing was a feeble attempt at controlling a narrative. Of course, it is all based on their own "understanding" of "serious" air operations and, of course, Kiev propaganda and "leaks", because no one in Russia would allow those losers nowhere near operations of RuAF.

In related news, I WILL watch the new Top Gun, once I gather enough spiritual strength to last through it, because the concept of F-14 fighting with Su-57 is down right bizarre.

And lively "discussions" of all kinds of fanboys and military "experts" from mama's basement on the "tactics" of that is rather hilarious. But then again, I read today the magazine and learned that effectively grounded and suppressed within first 2-3 weeks of the SMO Ukie Air Force managed to mount "a resistance". Yes, by means of flying random sorties one can count on the fingers of one hand and because Russia's EW and ECM "failed". My tooth hurts like hell after root canal today, but at least the nerve is gone, judging by the Air Forces publication, my tooth ache is nothing compared to Air Forces severe and increasing butt-hurt. Worst of all, one cannot remove the dying nerve from down there and, as I am on record, reality, like gravity, is a bitch and when it bites... I would rather stick to root canal procedures and "Top Gun Maverick".
Posted by smoothiex12 at 7:35 PM