Even The Broken Clock... Or Fast Response To Simon.

One of our friends, Simon, decided to criticize me for putting the doubt over John Mearsheimer's both academic adequacy and intentions, which I described in my post yesterday. Here is what Simon wrote.

What are you talking about? As I heard him, Mearsheimer is clearly criticising the USAmerican habit of hiding its aggressions behind the fig leaf of "democracy". Respectfully, maybe you need to just stop, count to ten, take a deep breath and go back and listen to what he actually said.

I do not deny the fact that I also hear Mearsheimer expressing common sense thoughts in the last several years. And the fact that he and late Stephen Cohen made a stand against hysteria of Russiagate can only be applauded and admired. But I never stated that Mearsheimer is a coward, far from it--his common sense position is an indicator of a significant human courage and that too should be admired. But the problem is that Mearsheimer also speaks as a classic American imperialist and one can easily find his verbal threats issued to Australia (the video of that was posted on our discussion boards), not to mention the fact that he has a very peculiar view on the history of the 20th Century. Here it is: 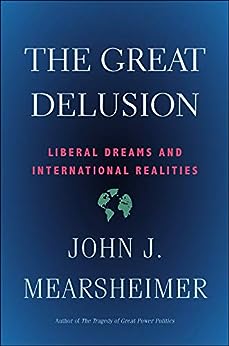 This is his recent, 2018, work of political "science" and it is disastrous in fundamentals. For starters, any "academic" who quotes Fukuyama in his work should immediately be viewed with suspicion in regards to its historical knowledge. But while Mearsheimer tries to figure out "liberalism's" place in the new world, he still thinks that it was Liberalism which defeated Nazism. Well, here is the issue, such view of the history is in foundation of both neocon "tradition" and American exceptionalism. Mearsheimer should accept a simple truth and a fact that it was Western liberalism which gave the rise to both Fascism and German National-Socialism and that "liberalism" exists today still, granted it poisons air with it's putrid gases of decomposition, ONLY because 27 million Soviet citizens died in WW II and in doing so gave a chance to the US to recover from debilitating Depression and saved Western civilization--the crucible of "liberalism"--from itself. It was Russia's contribution which gave "liberalism" another 70 years. But Mearshmeir doesn't bother himself with serious study of warfare.

It was Marshal Zhukov on record who noted in 1945: "We liberated them, and they will hate us for that forever." He was prophetic, while the whole Mearsheimer's historic view, it seems, is built around Anglo-Saxon world saving "liberalism". The fact of him, like those proverbial broken clock, being right (showing the correct time) twice a day is a matter of purely human common sense and the ability to calculate some consequences of escalation, not of his "academic" convictions which are those of a devout American imperialist and exceptionalist--both stances defeated by reality already. In the end, one can even find a rational seed in even the most outlandish manifestos, but American "realist" school is nothing more than a feeble attempt to recognize reality strictly on the American conditions, in America-centric world. Here is a classic US "realist". A card carrying one. And he is very representative one of such school of thought, same as Mearsheimer, who continues to push fully bankrupt ideas of American "realism".