Fantastical thinking began to dominate Western political mind somewhere around early 1990s and it never subsided. Many do think fantastically, it is nothing new, daydreaming is one such example, or, for that matter, "discussions" on the "tactics" of Maverick from the latest Top Gun, as if people are talking not about purely fictional BS but about serious tactical and operational reality. But it is one thing when some 35+ years old boy discusses Maverick's maneuvers in the latest flick, totally another when the admiral (right) of the US Navy parades himself as a clown.

Ukraine will determine the terms of any peace deal with Russia, US National Security Council spokesman John Kirby told the state-run Voice of America broadcaster on Friday. While others have suggested that Ukrainian President Volodymyr Zelensky should cede some territory for peace, Kirby said Washington is preparing for what could be “a prolonged conflict.”... Kirby insisted that Ukraine can fight on, and told Voice of America that “Mr. Zelensky is going to get to determine what victory looks like.” “Of course, we want Ukraine to succeed on the battlefield, and we want them to succeed at the negotiating table, if and when it comes to that,” Kirby continued. “We’re not at that stage right now. But we believe that President Zelensky is the one who gets to determine what victory looks like. “Our job is to make sure that he has the tools available to him to do that in the most efficient, effective way.”

Of course, Mr. Kirby's admiral rank is a some kind of accident, because his resume is rather subdued. And one has to wonder why he remained a restricted line officer, not eligible for command at Sea, before going to... PR. Obviously spewing BS came naturally to him and that is why he thinks fantastically and continues to propagate things so "advanced" for real military science and real military professionals, that the issue arises not about his professional adequacy which is non-existent, but of his mental state, because he introduces a new concept: utterly defeated power dictating terms of peace. In related news, Clausewitz was proven wrong by Kirby because classic Clausewitz dictum about war's main objective being "to compel the enemy to do our will" by means of war, a euphemism for defeating the enemy, is, apparently wrong. Mr. Kirby and many US generals are, evidently, convinced about it now.

Take fantastical thinking by such US military "analysts" as Generals Petraeus or Keane and you will see that Mr. Kirby is not alone. I will omit here description, done on many occasions by me, of psychiatric reasons for such a fantastical thinking, but here is truly genuine US combat officer who for decades is consistent in his views, many of which (not all) were correct, speaking about why when meeting with Churchill in Moscow in August 1942 (where Sir Winston went to inform Stalin personally that there will be no Second Front), Stalin noted that "Great Britain is a sea animal, Russia is a land animal."

MacGregor speaks here about what Glantz and House spoke for decades--a complete flipping of WW II history from feet to the head. Many, even in Pentagon, still cannot grasp the scale and the scope of Soviet operations in WW II and that is why so many in the West toil tirelessly to rewrite the history of WW II in such a way as to arrive to Earl Ziemke's conclusion that Nazis were defeated on the secondary theaters of operations or on June 6, 1944 with D-Day commencing. But I am ON RECORD for many years, the US Army never fought anything comparable in scale and scope of present day SMO. Unless one wants to insist that, not taking anything away from heroism of Allied soldiers or tactical and operational capability of Allied officers, Battle of the Bulge eclipses Stalingrad, Kursk or famous "10 Stalin's Strikes", including full demolition of Wehrmacht starting with Operation Bagration. Here is David Eisenhower, the grandson. 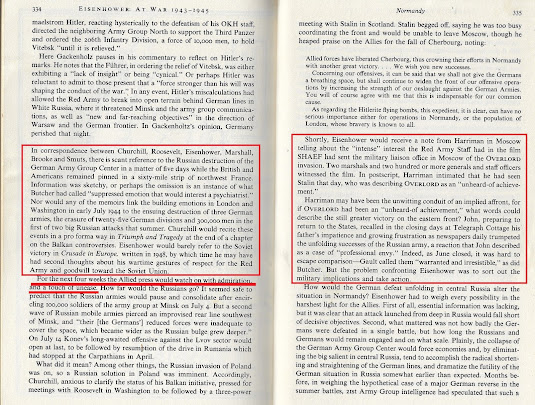 The explanation for consistent failure to forecast or anticipate anything from Russia is easy: it is a combination of arrogance and incompetence, exacerbated by a deep seated complex of inferiority. That is why this history of the events will be steadily erased from the Western historiography until the world of fantastical history, in which the United States is omnipotent and omnipresent power "for good" will substitute reality.

Meanwhile, while Kiev is getting ready to "dictate" terms of peace (a euphemism for the US feeling a coming defeat and, thus, BSing people), Russian forces, who, evidently, "ran out of ammo" and smart munitions, today wiped out three brigades, by means of massive strike by stand-off weapons, of VSU, namely 65th, 66th motor-rifle brigades and 46th aeromobile brigade (in Russian). Somebody, explain to BoJo and Kirby that Russia fights "economically" to save as many civilians as possible, but can turn on the pain dial to more than 11 and somebody in the West begins to recognize it. As per Russian Navy, since post-WW II period it was, is and will remain a classic Sea Denial force with very limited "power projection" capability--two-three serious (maybe four) LHDs and, maybe, two-three aircraft carriers, not counting Kuznetsov. How they will look like? Who knows. Russia "... goes not abroad, in search of monsters to destroy. She is the well-wisher to the freedom and independence of all." What a historic irony that John Quincy Adams unwittingly meant Russia of 2022, not just the United States of 1821.