Crude oil prices may soon hit $150 per barrel or more this year, Trafigura’s CEO Jeremy Weir told the FT Global Boardroom conference on Tuesday. The spike in crude oil prices would likely trigger demand destruction for the commodity, Weir added. The forecast is just $10 per barrel over where Brent prices shot up to in March shortly after Russia invaded Ukraine. 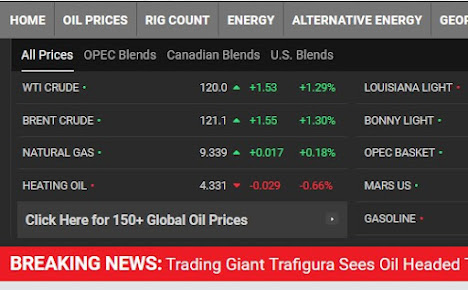 And collective Putin was laughing all the way to the bank. Here is what should be understood, Russian Urals oil brand is tied to Brent and even when sold at 30% discount it still sells for roughly $85 which is more than twice what is factored into Russia's budget (oil price around $40), which, in addition, is not that dependent on hydrocarbons anymore. This thought of Russia being awash in cash, obviously, doesn't allow Biden Admin to sleep well or even govern the country, the US that is, which is completely rudderless and is sinking into some sort of Great "Recession", a euphemism for something we never encountered before, which may make Great Depression look not so bad.

Janet Yellen, though, thinks that she can come up with the plan to "limit Russia's profits", while simultaneously maintaining the flow of Russia oil to the markets (in Russian). This, of course, brings us to the issue of mental adequacy of people who pretend to run the US, but then again--somebody did vote for Joe Biden. I spoke about it in my today's video, but it does explain Dmitry Medvedev's characterization of Western elites as "bastards" and "degenerates". For now, the combined West should pray that Medvedev is not a President and what is being disclosed about this guy in the last couple of years changes his image completely and this is not in, as some try to insist, his "preparation" as a successor of Putin. Putin has many more good years. No, what begins to emerge about Medvedev is that he is a real hawk. He also has a very good memory. So, make your own conclusions, but then again--there is a reason Putin has him as both close friend and a very close political ally for many years.

Now, will Russia break off diplomatic relations with the US? Russian Ambassador to the US Antonov, while describing Russian-American contacts as virtually non-existent (no surprise here), insisted (in Russian) that even "episodic" contacts between Russian and American military are essential for stability and prevention of conflict. I agree. Especially, when, as I am on record ad nauseam, US military being the last institution in the US which maintains a certain level of competence and can reason on many crucial issues of a strategic stability. Sate Department cannot, neither can the White House.

Here is an interesting fact:

Leo Tolstoy’s ‘War and Peace’ and other works that supposedly glorify the Russian military will no longer be taught in Ukrainian schools, Kiev’s ministry of education announced on Tuesday. Tolstoy’s internationally recognized masterpiece joins other classic Russian books banned in Ukraine long before the current conflict.

This also comes to the combined West and, eventually, everything Russian in cultural sphere will be purged, especially in Europe. In the US? I don't know, but Russian culture and history is a complete antithesis to neo-liberalism and globalism--a state "religion" in the US--and I can only imagine the excruciating pain Western neocons feel when reading War and Peace, or watching Russian war movies, or listening to Tchaikovsky 1812 Overture. Or visiting Moscow or St. Petersburg, or what have you. It is a metaphysical issue and that of being cultured in a true sense, which is not the case with modern Western primitive "elites".