As most of you know, I am only marginally interested in the everyday "tactical" minutiae of SMO, because now it is mostly ruthless extermination of what's very little left of VSU and sorting out these co called Territorial Defense Troops of Ukraine which are nothing more than modern iteration of the Volkssturm and have no chance against LDNR forces, let alone regular Russian Army. But while this situation is ongoing, some other very important things happen elsewhere. No, I am not talking about Turkey removing veto for Finland and Sweden joining NATO--in a larger scheme of things it changes very little for Russia. But this, below, does:

Following agreements reached during the January official visit to Moscow by Seyyed Ebrahim Raisi, President of the Islamic Republic of Iran, to further develop and deepen bilateral relations between Iran and Russia, the countries have decided to jointly revive the North-South Transport Corridor. This decision has become particularly relevant against the background of the unlawful sanctions policy pursued by the United States and its Western allies against Russia and Iran, and Tehran’s and Moscow’s desire to establish trade routes that are not linked to the West. In order to implement this decision, Iranian authorities are seeking to revive the recently stalled International North-South Transport Corridor (INSTC) project, which traverses Russian and Iranian territory and the two countries’ waters to connect with Asian export markets. As the Islamic Republic News Agency (IRNA) reported on June 11, in order to implement the International North-South Transport Corridor, the Islamic Republic of Iran Shipping Lines (IRISL) has initiated the transit of cargo from Russia to India or to South Asia through the project, using just one consignment note for the entire transit route.

This is this corridor. 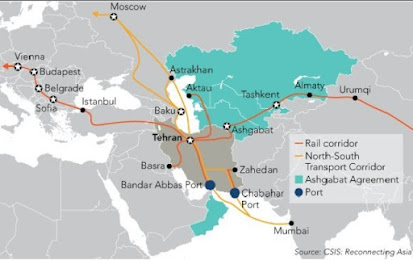 Geopolitical ramifications are huge for the region, especially when both Iran and Azerbaijan, which will have new railway built connecting Russia and Iran, capable to handle large rail traffic of cargoes ranging from wheat to oil, to metals etc. As article notices:

The International North-South Transport Corridor emphasizes the Russian port of Astrakhan and the Iranian Chabahar as bases for further transport to Eurasia. The development of the latter, as well as the construction of a large petrochemical complex and an export terminal near the port of Jask, are projects being implemented by the Iranian government as part of the Mokran coastal development strategy. Nevsky Shipyard, which produces multipurpose dry-cargo ships of RSD49 (deadweight of 7150 tons, container capacity of 289 TEU) and 005RSD03 (container capacity of 225 TEU) projects, is also engaged in the work of the North-South transit corridor in building ships for the Caspian Sea.

This brings us to the part of Russia's shipbuilding industry which concentrates on construction of those River-Sea vessels, like these:

Nevsky Shipyard has the order for 10 of these, other shipyards also build those or similar to them transports. Caspian Sea may get even busier in terms of marine traffic in coming years. This is a very important piece of news. Together, of course, with EU now trying to "resolve" Kaliningrad "blockade" and promising to iron out details in a few days.

VILNIUS/BRUSSELS (Reuters) - Trade through Lithuania to the Russian exclave of Kaliningrad could return to normal within days, two sources familiar with the matter said, as European officials edge towards a compromise deal with the Baltic state to defuse a row with Moscow. Kaliningrad, which is bordered by European Union states and relies on railways and roads through Lithuania for most goods, has been cut off from some freight transport from mainland Russia since June 17 under sanctions imposed by Brussels. European officials are in talks about exempting the territory from sanctions, which have hit industrial goods such as steel so far, paving the way for a deal in early July if EU member Lithuania drops its reservations, said the people, who declined to be named because the discussions are private.

Of course, they are private. In the West everything now is private and secret because public is completely excluded from any "democratic" process and should know only one thing--how unified and powerful combined West is, because, obviously, the reality is exactly opposite. But who cares about reality in West's political "elite"? I doubt many can even grasp it. But they surely are very "cultured".

Ben Wallace has said Vladimir Putin is a “lunatic” with “small man syndrome”, as he accused him of trying to change history through “violence and invasion”.

I believe Ben Wallace is a typical representative of British "elite"--barely educated and low-cultured, and I am on record on the "quality" of Sandhurst "products". They are good for barking, not very good for real fighting against real enemies. I guess Wallace senses this, being a defense secretary of a toy army of a toy country. Pink Floyd were wrong when singing about "hanging on a quiet desperation is the English way". Ben Wallace's desperation is that of a bellicose and verbose jester at the plastic throne.