How To Look Laughable.

And I mean it. Evidently in the course of what passes in the West for statesmanship throwing hollow promises to the left and to the right is considered a pinnacle of a state craft, while elsewhere it is considered to be a mere bullshit. Germany, evidently, decided that making grandiose statements without any wherewithal to support them in practice is a good policy. Right, you know, like promising not to expand NATO to Gorbachev.

Germany is “100%” prepared to provide some form of security guarantees to Ukraine, while the US government is still “in constant discussion” with Kiev, according to officials from both countries. The comments came, on Wednesday, after leaked proposals from Russian-Ukrainian peace talks appeared to suggest an arrangement where Moscow and various Western capitals would agree to promise Kiev protection if it agreed to de-militarise. “If guarantees are needed, then Germany will be there and give guarantees,” Germany’s Minister of Foreign Affairs Annalena Baerbock told state broadcaster ARD on Wednesday, saying Kiev could rely on her country’s support. Baerbock said Berlin was “in full solidarity, by 100%” with Ukraine.

Apart from obvious delusion of such a statement--Germany cannot guarantee anything to herself--one has to ask the question: who would believe Germany with exception of completely delusional Ukie "elites"? Or, for that matter, the US? Germany has to resign herself to a simple fact of life that it is a lapdog country with declining economy in general and industrial base in particular, lacking any resources and being in the state of committing a cultural suicide.  I mean, they still believe that they are "the locomotive of European economy", a favorite cliche by all kinds of creatures from Wall Street Journal. Militarily Germany is a pipsqueak and if anyone wanted to see this, be my guest, it is for March 2022: 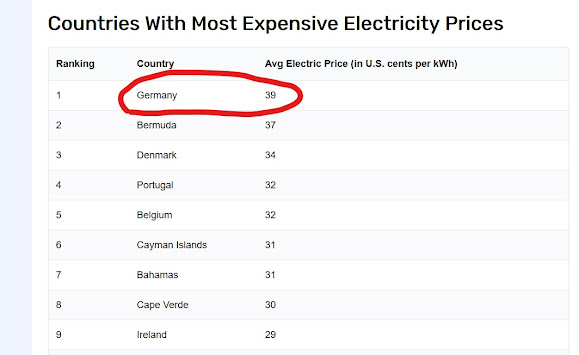 These are average prices, there are some places in Germany which have it as high as 50 cents per kWh. This is how economic death looks like, but sure, they need more philosophers, political "scientists" and activists in German government. So, the details of how Germany will guarantee anything are not disclosed. Of course. Details are boring and hard, grandiose statements are easy. Like the ones General Keane loves to make, especially using the term "strategy" in between verbal packages of BS about Ukraine and warfare.

They want Russians to die so badly, that they continue to invent things as they go and, of course, they love to parrot Ukie propaganda. In related new, Douglas Macgregor spoke in length about this whole clusterfvck of American (lack) or competent governance and piles of BS being created by Western media.

At this stage, American Main Stream Media can not be viewed other than a huge lie-machine for brainwashing public and they are the laughing stock of the rest of the world. Generally speaking, the profession of journalist has been killed in the West. It is now up to what passes for "alternative" journalism which faces the task of recovering the status of profession of a reporter. Here is one for you, wonderful Eva Bartlett talking to Gonzago Lira:
In conclusion, here is Andrei Raevsky's good take on this whole "tempest in the tea cup" (primarily spun by all kinds of amateur "analysts") of "negotiations":

Long before the Russian Special Military Operation (SMO) in the Ukraine started, but following the Russian ultimatum, I indicated many times that what Russia would be doing is the following: ask for negotiations and if the other side rejects them, Russia would turn up the “pain dial”, slowly, step by step.  If the other side agreed to negotiations, but then used them to stall and negotiate in bad faith, same response: Russia would turn up the pain dial.  A little.  Step by step.

Pentagon, actually, got it almost right)))

Yeah, Kiev is not a target (at least for now), it never was from the start. The VSU around it were. I quote Medinski again that reduction of activity "doesn't mean a cease fire". There is nothing to comment on it--everyone, I hope, by now read Scott Ritter's excellent primer on operations.
Posted by smoothiex12 at 4:40 PM