To Give Some Impression Of The Scope.

Of operation in Ukraine. Here is the map for today: 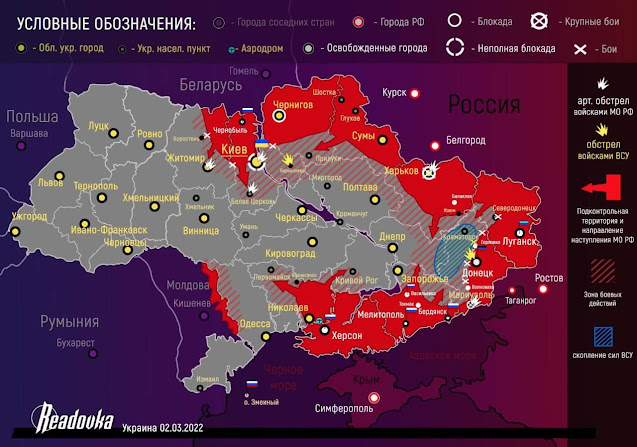 Those who still have issues with grasping what they see, I'll give them some scale: the area of operations you observe is roughly the size of one third of Ukraine's territory which is 603,000 sq. km / 3=201, 000 sq.km, which is very roughly (slightly less) the size of the United Kingdom. So, those who still have issue with coming to terms with what is actually happening--get a grip, it is a serious war of a new generation. I speak about this in video I am trying--unsuccessfully--to upload to YouTube in the last two hours. It simply refuses to load it, stops at 11% and is not moving. The progress is excellent.

Those who expect that war to be over in 72 hours, you better get educated on the meaning of the deep operations and urban combat. Some people call on Russia now to go into overdrive. Russia can do that but she will not do that because this will mean many more civilian casualties. Especially against the background of ukies using human  shields all over the place, such as not allowing civilians to leave for humanitarian corridors Russian Army opened all over: from Kiev to Mariupol. Nazis are desperate, as are their masters from Washington and London.