A Simple Request And A Sitrep, Of Sorts.

Guys, a simple request--and I know, everyone wants to know and have some guidance--but, please, do not expect me to respond to every kind of re-posted twitter by some shithead from some London and Washington's think-tank or media and debunk their BS. It is physically impossible for me, and suffice it to say that I am on record already--bar some very few exceptions of a professional and objective analysis from Western professionals (i.e. Macgregor, Ritter, Armstrong, Saker et al), the reporting and analyzing Russia's operation in 404 by US military "experts", including all those senior and highest ranked officers, disqualifies them completely from being taken seriously and as people who know the subject. No wonder then to see the US war record of the last 75 years. Responding to other "professors" of what have you who spew plain simple ukie propaganda--there is no even need to discuss that. The West is in full blown war against Russia and because of that there is no low and lying they will not stoop to. I already pointed out the main reasons for that. 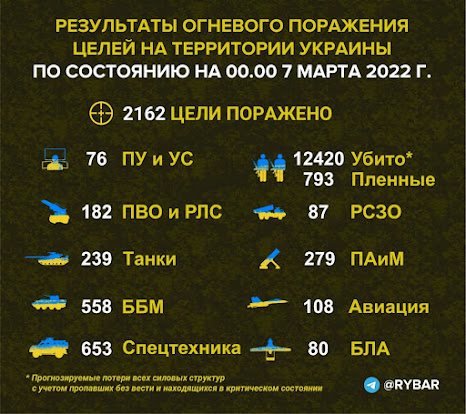 You don't need to know Russian to understand what is shown, with the exception of 12, 420 ukie KIAs, MIAs and critical ones, meaning most of them will not live. It is a projection, but I see no reason to not believe it, because this fits quite well into the intensity of the combat and Russian Army being very restrained in terms of using an overwhelming fire power in order to save primarily civilian lives but also not to incur catastrophic losses on VSU, which for all intents and purposes already doesn't exist as a coherent force. As was expected, of course, Nazis didn't allow civilians to use humanitarian corridors and continue to use them as human shield. The responsibility for that lies with the West, especially the United States who encourage their Nazi proxies to behave in such a way as to create a "picture" for Western media to use as propaganda.

The mopping up of Mariupol has already begun and both LDNR and Russian forces will do their utmost to reduce civilian losses to a minimum--as always that means higher losses for Russian and LDNR forces, but it is Russia's fate, always. The info on US biolabs in 404 continues to be released and the scale there was really impressive, from developing anthrax to collecting Slavic DNA, I guess they want to "improve" Slavic race, namely Russians to a full extinction. Been there, done that. So, dogs bark but caravan passes on.

The main news, however, are on economic front and, mind you, Russia didn't even start to introduce her own counter-sanctions. What has been done is the creation of the list of "unfriendly" nations and that means that Russian firms can pay their dividends in Rubles, to Russian banks, while United Russia is preparing the legislature on nationalization of the assets of those Western companies which leave Russia (in Russian). This is just the warmup. The big badaboom comes with energy and even here:

It is a very misleading headline because confusion is spreading throughout Western economic and political institutions like a brush fire on a hot dry day. Brent Crude is now at $137 per barrel, and gas... oh, boy...

Crude oil prices fell to their lows of the day and European natural gas prices retreated after German Chancellor Olaf Scholz said that Europe's largest economy has no option but to keep buying Russian oil and gas.

"At the moment, the supply of energy for heating, for mobility, for electricity generation and for industry cannot be secured any other way," Scholz said in a press statement confirming that Germany will continue to transact with Russian energy companies.

Well, what can I say--can you imagine what will happen to Boeing and Airbus once Russia releases all those 520 commercial aircraft, which she doesn't need anymore, back to the West? As Bernhard correctly concludes in his latest:

All the consequences of the 'west's' reaction to Russia's move were foreseeable. It is pure recklessness and stupidity that have allowed them to take place. The 'west' will now get punished for the bad movie it has launched.

Frankly, I never saw anything like this in my life. Like never. And if the United States was planning to drive Europe into utter submission, something went really wrong with planning, because the impact on the US is already massive and it is just the start, it will get much worse and I am talking about Great Depression type situation.

The average price of a gallon of self-serve regular gasoline in California is now a whopping $5.28, compared with $3.73 at the same time a year ago, according to the latest data from the American Automobile Assn. In Los Angeles County, the average gas price for regular-grade fuel is $5.37 per gallon — up from $4.67 a month ago and $3.79 a year ago, according to AAA. The national average is $4 per gallon. Experts say Russia's war on Ukraine and an increase in gas demand coupled with a reduction in total supply are contributing to the prices, which will probably keep rising as crude prices continue to climb.

This is simply unsustainable. In Washington prices are hovering now above $4.09 a gallon and continue to rise. But Europe will be first to fall. So, this is this Monday's primer and the West's suicide continues.