About Rumors, Which May Not Be Rumors...

... at all.  I will remind you one thing I wrote last year, while demolishing Valdai Club Timofeev's (lack of) military expertise who, as well as other native Russian "experts" of this kind, RT loves to invite to spread ignorance around. Here is this "thing":

I don't know why "one Ukraine scenario" even enters considerations here? I have no rational explanation to why Timofeev even discusses that. In the end, leave it to Poland, Hungary and Romania to deal with Western Ukraine. That, BTW, may become what would put the final nail into NATO's coffin.

In fact, I am on record about Polish (and other East European) aspirations towards Western Ukraine for years.  In the end, there are Hungarians and Rusins who already beg Victor Orban for protection for more than a year, there is Bukovina where Romania may get some satisfaction from the coming "loss" of Moldavia. So, RT reports:

Ukraine's Deputy Prime Minister Irina Vereshchuk has questioned, what she has described as, Hungary’s “pro-Russian” rhetoric, suggesting that the desire for “cheap Russian gas” or even a potential land grab could be behind Budapest’s policy over the conflict between Moscow and Kiev. In a lengthy Facebook post, the official claimed that “not even all Russian satellites from the former Soviet Union behave the way Hungary’s authorities do.” She said that Hungary does not support sanctions against Russia, refuses to provide Ukraine with weapons, and even “does not allow weapons from other countries to pass via their territory.” “In fact, they say ‘no’ to everything. A bit more – and Budapest's official rhetoric will be totally pro-Russian. What is this? Want some cheap Russian gas? Or maybe want our Transcarpathia?” Vereshchuk wrote before calling on Budapest to “join the civilized world” and “not to repeat the mistakes of World War II when Hungary made a wrong choice.”

Well, I think it is Ukraine which made a wrong choice, not Hungary who has been keeping much of its army near Ukrainian border for a while. And it goes without saying that Poles remember the original name of the Polish city currently known as Lvov, and it is Lemberg or Lwow.  So, Alex Christoforou makes some announcements (with caveat, obviously) today about this Polish thing.

But Russians have been discussing the possibility of Polish "peace-keeping" (meaning the annexation of what is effectively historic Polish lands) for a while. Ruslan Ostashko altogether states that Biden's upcoming visit to Poland IS about partition of Ukraine, with Poland moving into the Western Ukraine (in Russian). As I, among many, state non-stop (the latest being yesterday when talking to Piero), there is a feeling around that Kremlin itself still contemplates what to do with Banderland (West Ukraine) because Russia doesn't want to get those people on her balance and partition of that land is by far not the worst scenario for Russia.

As they say, there is no smoke without fire, and I think the probability of Poland getting in is far from trivial. Also, circulation of such let's call them, for now, rumors has a significant military aspect behind them, because Polish Armed Forces are by far not the Russian Army and they follow operation Z very attentively calculating required force and I am sure behind closed doors Polish military people are pretty happy seeing reports of annihilation of large VSU forces, but especially those of Neo-Nazi formations, such as Azov "battalion", who have roots in the Western Ukraine. The more "banderistas" Russians bury, the easier it will be for Polish "peace keepers" to deal with whatever resistance they may encounter in and around Lwow.

In fact, the whole logic of the conflict dictates these events, including possible partition of what's will be left of Ukraine. In related news, while Western military "experts" (such as this "expert") from NYT continue to spew headlines like this: 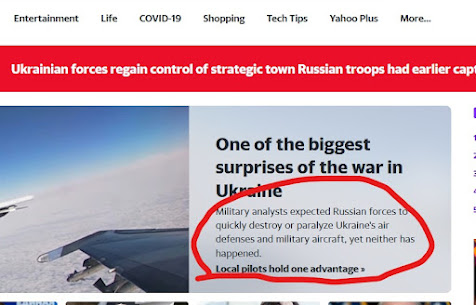 I can only imagine the wowser which comes after reading on operations of Russia's AD over such a vast theater once reports will be done after things calm down somewhat. It is something we never saw before. That will rub a lot of salt into already gaping wounds of many Western military "experts". Per Western media low-lives, they have Pulitzers to console themselves for spreading war crimes propaganda and sophomoric lies.
Posted by smoothiex12 at 7:56 PM