So, The Punishment Starts In Earnest.

You already read it, but let me reiterate:

Ursula von der Leyen, the President of the European Commission, has accused Russia of using natural gas supplies as an “instrument of blackmail” following Gazprom's decision to halt exports to Poland and Bulgaria on Wednesday. Warsaw and Sofia failed to pay for Russian gas deliveries in April in rubles, Russia's state-owned energy corporation explained. In a statement released on Wednesday, von der Leyen claimed that the "announcement by Gazprom that it is unilaterally stopping delivery of gas to customers in Europe is yet another attempt by Russia to use gas as an instrument of blackmail." The Commission president went on to describe the decision as “unjustified and unacceptable,” adding that it further highlighted the “unreliability of Russia as a gas supplier.”

Oh my, so sanctions and stealing financial reserves are not "unjustified and unacceptable",  and so is arming Nazi regime in Kiev, but getting slapped into face for doing so is now bad? We all know what could be said here, but as I stated before Poland and Bulgaria will be made an example to show others that Europe did it to herself and if need be, Russia may stop practically all economic activity with Europe. But not everybody in brainwashed Europe wants to commit a suicide. Here is one, out of many, such an example.

Italian energy giant Eni SpA is preparing to open ruble accounts at Gazprombank JSC, allowing it to potentially comply with Russian demands that gas must be paid for in local currency, according to people familiar with the matter.The move is precautionary as Eni seeks more guidance from the Italian government and European authorities on whether -- and under what conditions -- it may use the accounts to buy Russian gas, the people said.

Many other European companies already opened Ruble accounts and the "plan" (developed in kindergarten) is simple and transparent here--to buy additional volumes of gas and oil through Ruble account holders and then distribute those volumes inside EU, including to all those "proud" nations as Poland, Bulgaria and it seems Finland too. Sure. As I "warned", Hungary may become a very rich country soon. Even Austria may get on that lucrative scheme (in Russian), which, in the end, raises the question why Austrian Chancellor went to Moscow recently at all? He tried to threaten Putin and was shown to the door immediately. Putin is on record: the refusal to pay in Rubles is a breach of contract, period.
I know how difficult it is for combined West to accept this reality, but resources-based Ruble is here now and not just de facto but de jure and is becoming a very hot commodity. As this, today's, exchange rate testifies to: 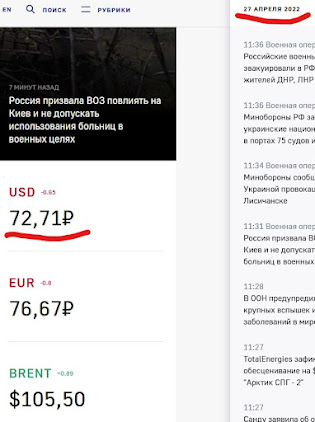 that there is a lot of butt-hurt and sore losing is going on in Western capitals and Yahoo News doesn't even bother anymore and simply places this kind of BS on  its front page:

Following the example of Dunkirk: the fighters of Mariupol ask for a procedure that even Hitler agreed to in 1940.

Per military news, which, as we all know Russia is losing badly, and as UK toy soldiers inform us:

Ukraine retains control over the majority of its airspace, Britain’s defence ministry said, adding that Russia has failed to effectively destroy Ukraine’s air force or suppress its air defences.

I think Sandhurst has to be simply rebranded into the Circus Academy (there is a good one in Tucson, as an example) and just be done with all this military mambo-jumbo because the graduates of the Circus Academy (acrobatics department) can do as swell of a job discussing modern warfare as Britain's Defense Ministry. But then again, Pink Floyd should review and rewrite their  line from The Dark Side of The Moon's immortal track Time: "Hanging on in quiet desperation is the English Way". English way is not quiet, it is bombastic, into your face, loud stream of utter hysterical bullshit which comes as a surprise for fans (like me) of the old English culture of the stiff upper lip, delightful humor, acute sense of self-deprecating and great intellect all of which long ago left the shores of the Foggy Albion and gave us this: 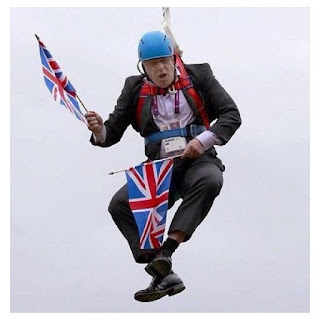 Boy, how far has Great Britain fallen. But then again, this is the choice British people made and that's the way the cookie crumbles. But if I would have been David Gilmour and Roger Waters I would have rewritten this line from Time. But that is just me, little insignificant me. Indeed, what do I know.