I put quotation marks for a reason but make no mistake--I understand the importance of money for the economy, they are the blood of economy. But here is the problem about which I am on record for many years--unlike tangibles of agriculture, machines, healthcare and education, money, finances that is, whose properties can be described in purely materialistic terms, e.g. "this lathe is 50 years old but it still does the job and does it well", or "this dump-truck sucks, and is about to break, because...", you realistically cannot do this with money.

Whether you like it or not, but money always carry with them a huge baggage of appropriated mythical qualities which are, unlike it was the personal case with Hank Hill who shed his tear for his truck by watching movie about the "death" of a tractor, money and their effect are omnipresent in human culture and are either extolled or condemned. In the end, Judas sold Jesus out for 30 silver coins, money that is, not for the new Ford truck or X-Box whatever the latest model. Remarkably, it is in the times of serious troubles when money lose all its allure and tangibles become more precious than money. What's the point of money when life-sustaining 125 grams of bread in Leningrad in 1942 could be received only by presenting the coupon (card--kartochka) and you couldn't buy it even if you wanted to no matter amount of money. What is the worth of money when your life depends on tourniquet and a vile of penicillin but you need it now to survive and no amount of money can buy you both, rather inexpensive items.

You may say my examples are not precise, sure--I do not pretend to cover all bases. But for years I continue to drive this point home: money are just the medium of exchange and as such they are a derivative, however important, because they either have foundation of tangibles or they don't. Bretton Woods and US Dollar emerged primarily due to a fact that the United States in 1944 was the only country among world powers which not only hasn't been devastated by the War, but, in fact, benefited greatly from the war and in 1945 US economy was responsible for 50% of world's manufacturing in goods. Simple as that, anyone who tells you otherwise--they better get back to school and take a basic truthful course of the history of the 20th century. But now we live in the 21st.

The US dollar is dealing with some of the same challenges that the British pound faced in the early 1900s, before it went into decline, Goldman Sachs said in a research note released on Thursday. The Wall Street bank warns that the greenback could lose its global dominance. According to the research seen by Business Insider, the move by Washington and its allies to freeze much of the Russian Central Bank’s foreign currency reserves has raised concerns that countries could start moving away from the dollar. Analysts explained the risk as due to worries about the power the dollar grants the US. The challenges that Goldman Sachs named include the fact that the US has a relatively small share of global trade compared to the dominance of its currency in global payments. Another issue is that the country has a deteriorating “net foreign asset position,” with rising foreign debts. In addition, the nation faces geopolitical problems, such as the conflict in Ukraine. The Goldman Sachs economists also said the nation’s large debts due to the fact that it is a big importer of goods could be a particular problem.

No shit, geniuses. How about you learn for warm-up what is the national power and how it is formed, before throwing our way all these contrived financial psychobabble and translate it into normal human language for the average Joe on the street, that the US economy is dwarfed by China's, that India, for all her problems is ticking up economically and will overtake the US fairly soon, that Russian economy is larger than that of Germany possibly two to three times, that the only thing which matters in the world is how large your economy is and what you produce and how you can defend your resources and sovereignty. And it goes without saying that the United States and its currency begin to fail across the board on pretty much any criteria.

And then there is a power element to all this: Russia's massive resources are defended by one of the best armed forces in the world and massive arsenal of both nuclear and conventional high precision stand-off weapons. The United States cannot realistically fight conventionally Russia without sustaining catastrophic loses and immediately escalating to the nuclear threshold. Hence a hysteria about Ukraine and a complete butt-hurt propaganda about Russia "losing" in 404. This is not about caring about Ukraine, it is in full understanding that the US-established zero-sum game militarily with Russia is an excellent demonstration of how US proxies have their asses kicked starting from Georgia in 2008, to Syria and now, the last best hope of neocons, in Ukraine. Against the background of the US having zero prospects in Syria, having been pushed from Iraq and being utterly humiliated militarily in Afghanistan--the US doesn't seem that mighty and invincible, in fact the opposite is true and the world took note.

The only chance for the US to fight China is on Indian Ocean's SLOCs, where the US Navy still holds the edge, primarily because of its submarine force, but China is building up and will eventually both mitigate her dependence on SLOCs and develop a serious naval deterrent. I don't want to even go into the discussion of the US pretending that it can fight PLA on the continent--this is not even funny. So, there you are. Now Borisov made an announcement that new State Order for Defense (GOZ) will include further robotization and deployment of direct energy weapons (in Russian). Always keep in mind this military aspect--it is what shapes geopolitics.

Russia de facto introduced the gas Ruble, oil Ruble is coming because both Gazprom and Rosneft exited their EU subsidiaries and now have nothing to do with them--let Germany "nationalize" them (I guess one can always use additional office furniture and empty storage facilities) and now EU doesn't have contracts for gas and oil, since, before the latest events, contracts were signed with... and you have guessed it, EU subsidiaries of Gazprom and Rosneft which now haму no relation to either Gazprom or Rosneft. Good luck, EU, negotiating new contracts with Gazprom and Rosneft. I heard Gazprom Bank is a very good bank, and, most importantly, it is in Russia which precludes the repeat of West's standard procedure of robbing others, such as was freezing Russia's currency assets worth in excess of $300 billion. I know, for German "elites" who still view Russians as subhumans (old habits are difficult to get rid of) this whole thing is so humiliating but Europe made her choices. No contracts, no resources. What is the Euro worth now? And this is just the start.

Now, we can go back to what I mentioned yesterday about Hungary and Slovakia becoming this proverbial window from EU in order to somehow satisfy its needs. Well, I am 100% sure both Hungary and Slovakia will be only happy to oblige because they have no problems with doing what is profitable for their countries and do not give a shit about ideology. This also explains the fact that Russians are in no hurry to return about 500 Boeing and Airbus planes leased by Russia's air lines and Russians are really stunned by sheer idiocy of the West which thinks that it can steal more than 300 billion USD from Russia and Russia will not retaliate. Those 500 commercial aircraft cover a large portion of $300 billion stolen from Russia and Russians will have no problem servicing them, because Russia has her own massive aerospace and adjacent to it industries capable to manufacture any spare parts. So, you see--physical economy is a very different game than currency speculation and stock trading, and even banking. It is what you have at hand which matters, not what you project. In the times of troubles this is absolutely true.

In related news, Russia continues to lose tremendously in 404, to such a degree that what's left of Marines 503 battalion of VSU (264 people) decided not to risk it anymore: 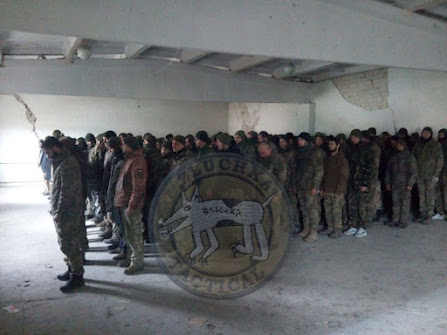 And surrendered. Good for them, LDNR will need all manpower it can get to restore Donbass cities and towns. Very many VSU POWs are already working clearing streets and rebuilding on the liberated territories. I mean those who were just grunts, Nazis have a very different fate for them. And this is the primer for Monday.
Posted by smoothiex12 at 1:52 PM