It Is Only Natural...

You want to stop Russian advance? Easy--start killing your own civilians. 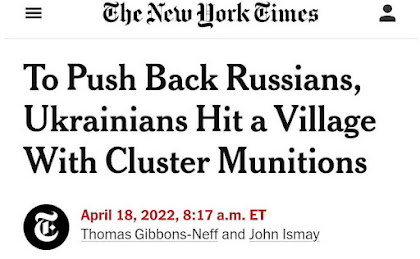 The piece is behind the paywall, but because it is NYT you can safely assume that it will be same old set of propaganda tropes about SMO. But since NYT's (or WaPo's) journos are barely fit to operate in normal society with basic morals and understanding right from wrong, this admission is not trivial. It is important and it is just one in the massive array of 404's and its Western curators' war crimes.
Per strikes on Lvov and destruction of the 124th Unified Logistical Center of VSU's Rear Services (in Russian). This is basically a pattern which repeats itself now: the West ships hardware to 404, Russia wipes it out. This will continue. Per real economy and news US MSM do not report. I want to reiterate, this process is ongoing:

While the United States has been pressuring its European allies not to buy oil from Russia, it has been increasing the volume of import, proving its double-standard and mockery. By Wang Wenwen and Hu Yuwei. In a contrasting move to its pressuring of European allies to not buy Russian oil against the backdrop of the ongoing Ukraine crisis, the US increased crude oil supplies from Russia by 43 percent, or 100,000 barrels per day, over the past week, Russian Security Council Deputy Secretary Mikhail Popov told Russian media on Sunday, with critics pointing out that the US pursues its own interests at the costs of its European allies.

And again, as with the other tangibles, this "contrasting" policy will continue, especially keeping in mind approaching mid-terms. But this whole thing is what I am constantly trying to make a point about. The United States while still being economically large is nowhere near in terms of its weight of economy as Wall Street and stock traders try to portray. 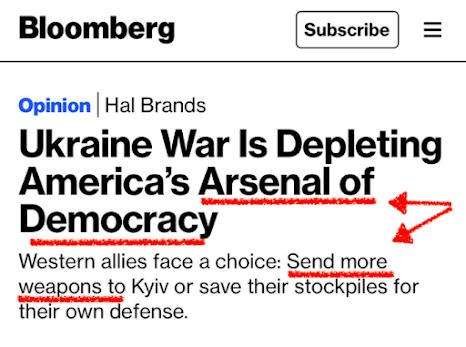 While absurdity of title is undeniable (Arsenal of Democracy killed millions of innocent civilians in the last 30 years), the truth is, realities of the real war involving serious forces, difficult terrains, vast geographical expanses are not your regular bombing defenseless enemies into the stone age. Nope. That is why Russia has a full blown War College (Academy) of Material-Technical Provision named after Khrulyov, aka in English Military Logistics Academy.

Yes, Russians care about having more than enough weapons and materiel and delivering it to fighting troops and have the whole damn science developed based on that. Moreover, this logistical thing is designed to be operated under the most adverse combat conditions, not under the favorable ones. In other words, Russians plan for war and as "rumors" have it, most of Russian plant producing ammo and stand off high precision weapons are working in three shifts, non-stop that is. But the issue of real military economy is a vast one and has to be discussed separately. Once discussed it can easily explain why the United States even if it wanted to cannot supply VSU with what general Petraeus calls "game changing weapons".

Take M1 Abrams tanks or Patriot PAC3 AD systems. In the modern battlefield those are not survivable. You can imagine what kind of reputational losses that will be. Especially since Houthis destroyed a number of Saudi Abrams tanks and the "performance" of Patriots against Houthi drones was rather lacking, to put it politely. Ukraine, of course, is not Yemen or Iraq, the war there is a whole other story. At least you can always say that good ol' M-113s, most of which will be destroyed or taken as trophies by Russian forces, if those venerable APCs ever make it to the front line, are old and not like super-pooper  "game changers" Petraeus talks about.

Per RKR Moskva, evidently some photos are now available, and some stories begin to emerge: 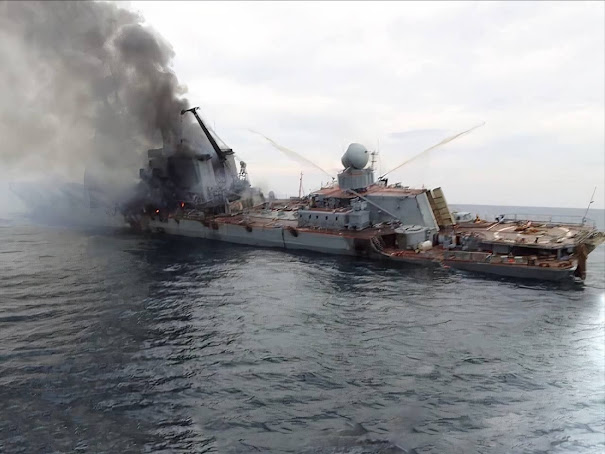 One of such stories (I cannot confirm its veracity) is that Moskva actually fought a serious Air Defence battle against waves of attacks and that eventually the AD was breached. I don't know. Possible? Certainly possible, and the presence of the US air assets in the area, including P-8 Poseidon and Global Hawk, certainly gives a hint, but, as I say, until Russia's MoD issues the report on this event it all remains primarily speculations and rumors. They will continue to circulate, of course. If NATO (namely US and UK) were, indeed, involved in some way in sinking of Moskva, expect a real response from Russia. Where and how, we can only speculate, but there will be a response. Meanwhile VSU continues its attacks on own civilians and blame it on Russia. Classic. In conclusion, looks like there is a lot of movement today in Donbass by Russian forces. While British soldier of (mis)fortune Aslin sings like a bird about atrocities VSU committed against civilians.
Here is another batch of VSU POWs and they are so brainwashed that when they recognize that upon surrendering or being taken POWs they will not be killed, tortured and starved, they do experience a cultural shock and a severe cognitive dissonance.  In related news, many Ukrainians, especially of nationalistic variety sincerely believe that many Russians do not know what a modern toilet is. This is not a joke, they think that Russia is even worse than their shithole of a country. This is your primer for Monday.
Posted by smoothiex12 at 11:37 AM