They Are Getting The Message, 2.0.

Once the snowball started to roll downhill... Well...

BREAKING: Ukrainian soldiers are resigning en masse & refusing to fight. We are now witnessing the breakdown of Ukrainian forces in the Donbas. 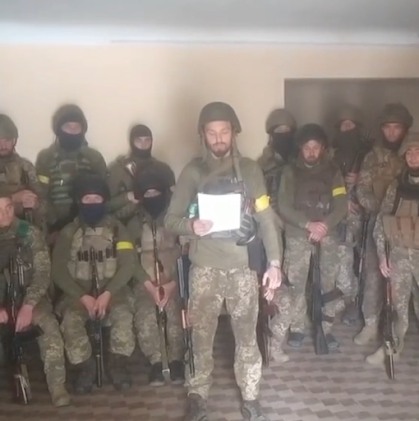 Scott Ritter created a bit of a stir over the weekend with a comment suggesting the Russians have fumbled the ball and set themselves up for Stalingrad like victory (i.e., a long and bloody struggle). I think Scott is wicked smart and we played golf together–he treated me and another who shall remain nameless at the Army Navy Club course in Virginia a few years ago. I disagree with this bit of Scott’s analysis.

As I am on record, combined arms warfare of a scale is a very different thing from what NATO people ever encountered. There are some excellent comments at The Saker's blog on this issue, including people who understand how Field and Combat Manuals are written, but even this important knowledge means very little when shit begins to explode around you. Not to mention the issue of other "wonderful" things related to continental warfare, like the enemy driving into your village (hamlet), disembarking and beginning to rape women, shoot children and elders and other wonderful things of this nature which Pentagon and UK people "taught" others but never experienced themselves--that is how they "teach" humanities in Ivy League and in Oxford, a bunch of former hippies explaining and describing what unicorns are.

So, when people begin to express their will to survive, for any creep in State Department or Pentagon this is so unusual, they got used to throw other people's lives under the armor and artillery, precisely because they never experienced that. Most US generals (albeit I would have the issue of immediate impotence when forced to screw Paula Broadwell, obviously, Petraeaus is a "bigger" man than me, wink, wink) have no idea what modern warfare is and in any practical term they would have huge issues understanding what is going on around them when fighting a real enemy. This brings us to a completely other plane (conscience-wise) and this one requires a bit more than just sappy-sentimental stories about PTSD (it is a real deal, believe me) but a serious foray into the enemy's capability, which in the US in the last 30 years has become a purely ideological issue. Akin to famous Soviet anecdote about Red Army machine gunner who runs out of bullets. Then the political commissar comes to the machine gunner and asks him:

--Are you a communist, comrade machine gunner?

--Then, why your machine gun fell silent?

--Because I have no more bullets, comrade commissar!

--But you are a communist, comrade machine gunner!

And the machine gun started to shoot again!

So, basically, this is a modern Western military "science" and it works in a fantastical way. Just like Hollywood. You know, "dream factory", "tinsel town", shit like that... That is why they are always unprepared to face the reality...